This was the second rehearsal on site held during the day and also the first rehearsal with 2 of the musicians for District 18, Azreen and Rizman. We were all introduced to each other and

It was even more crowded compared to the previous rehearsal, which is interesting to note as this is the timing of the actual performance on 17 March, hence it is a good gauge of the “audience” that would be present.

The curvature of TRMFC is negated in this panorama.

The “lighting” at this time. 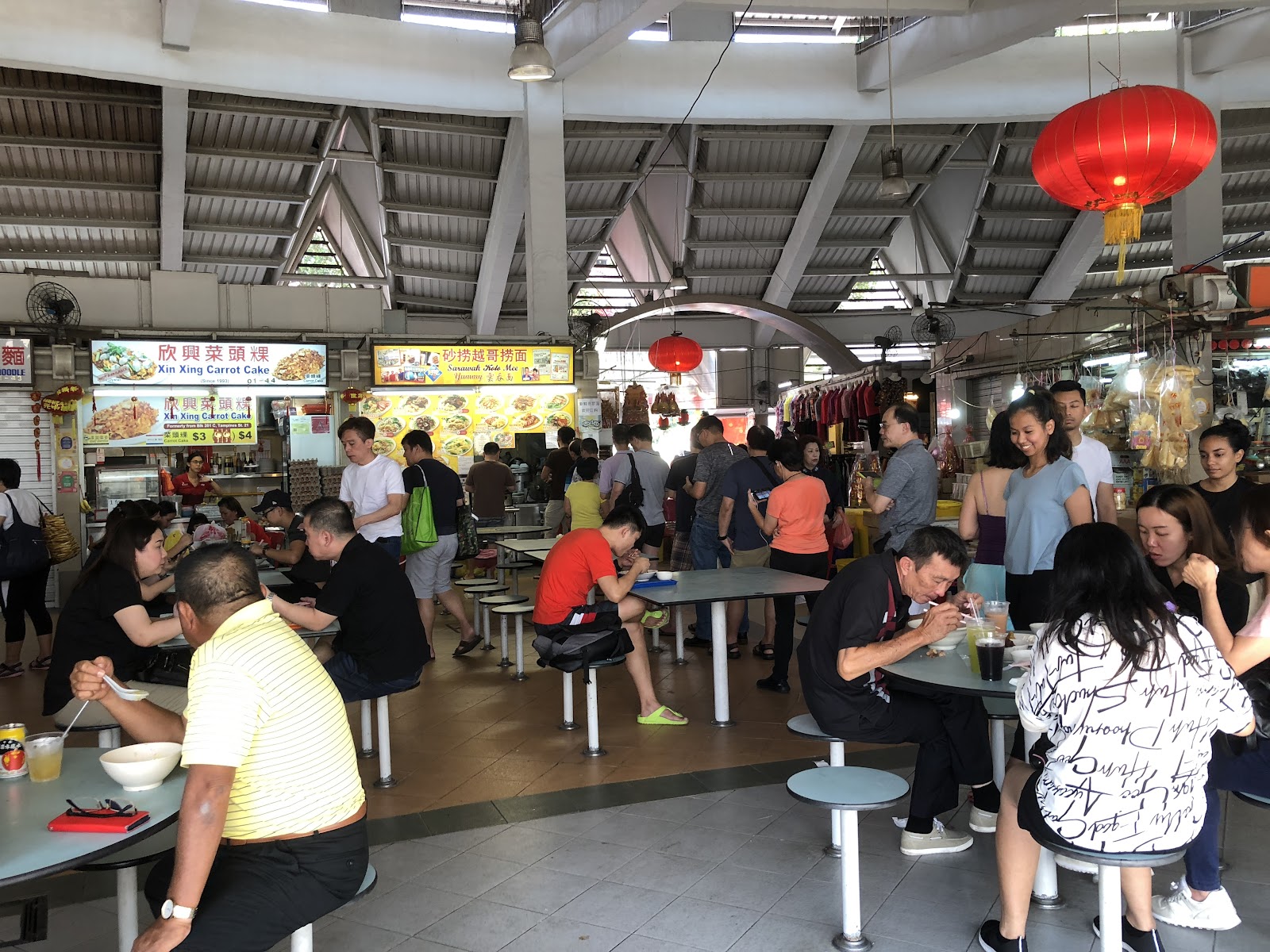 The dancers initially blended in with the residents.

As they carried out the imitasi, it felt as if the TRMFC started transforming from a hawker center to a huge performance space with many supporting performers. The dancers’ presence and their actions gradually became apparent to the residents, who started noticing them and started to wonder what was happening, based on their facial expressions.

What was it that made them noticeable? Was it the aura/intention of their movements, was it weird, unnatural, too obvious? 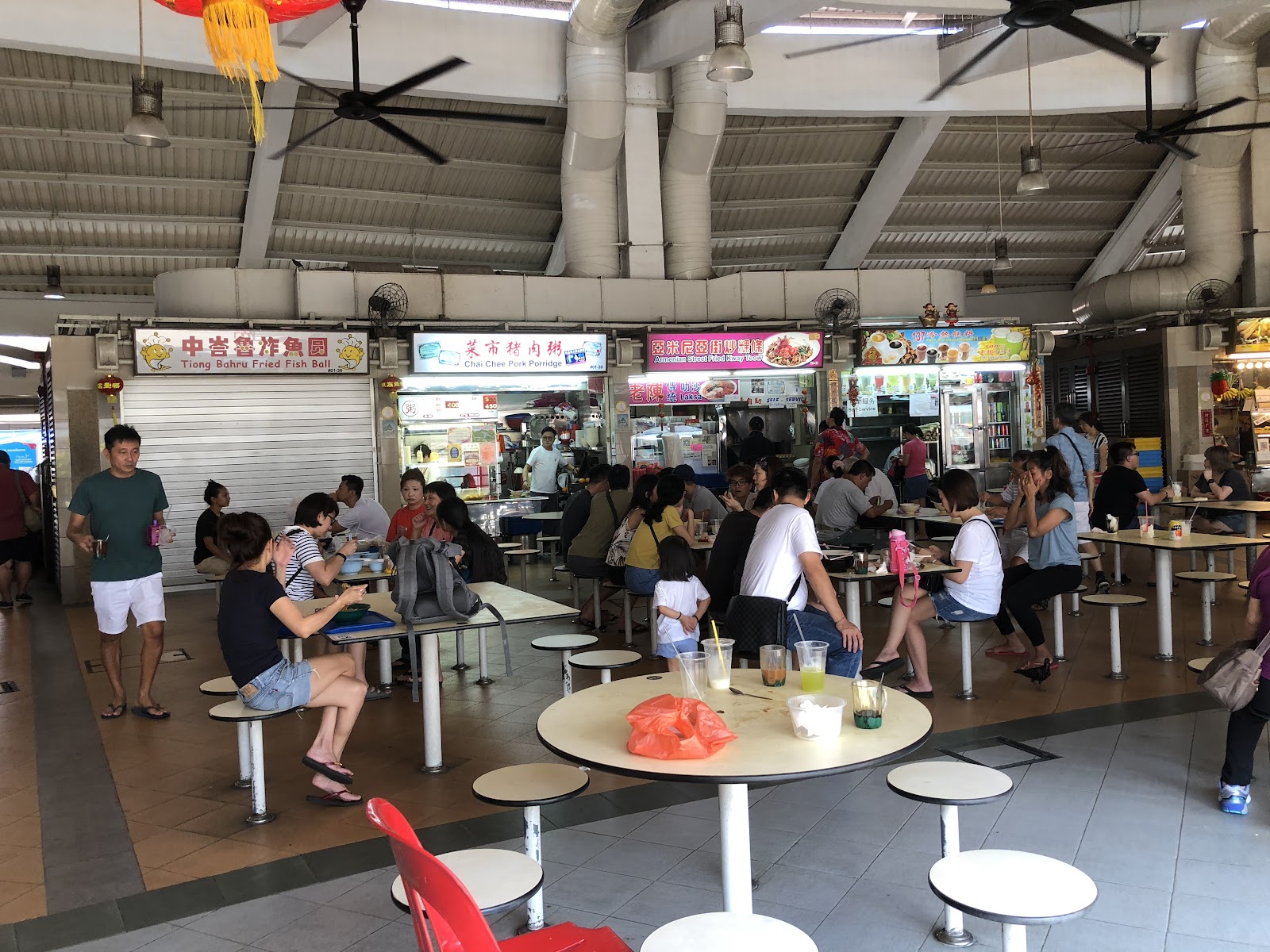 Movements that seem to appear pedestrian still stand out among pedestrians.

A middle aged man n a red polo tee was curiously watching and following the dancers as they moved through the hawker center. Some residents walked past or through them, whether they were aware of the trio was uncertain. A Malay couple gave occasional glances from a distance. A Chinese mother and her daughter were presumably discussing and talking about the dancers while watching. Many residents were noticeably awkward when the dancers were nearby. 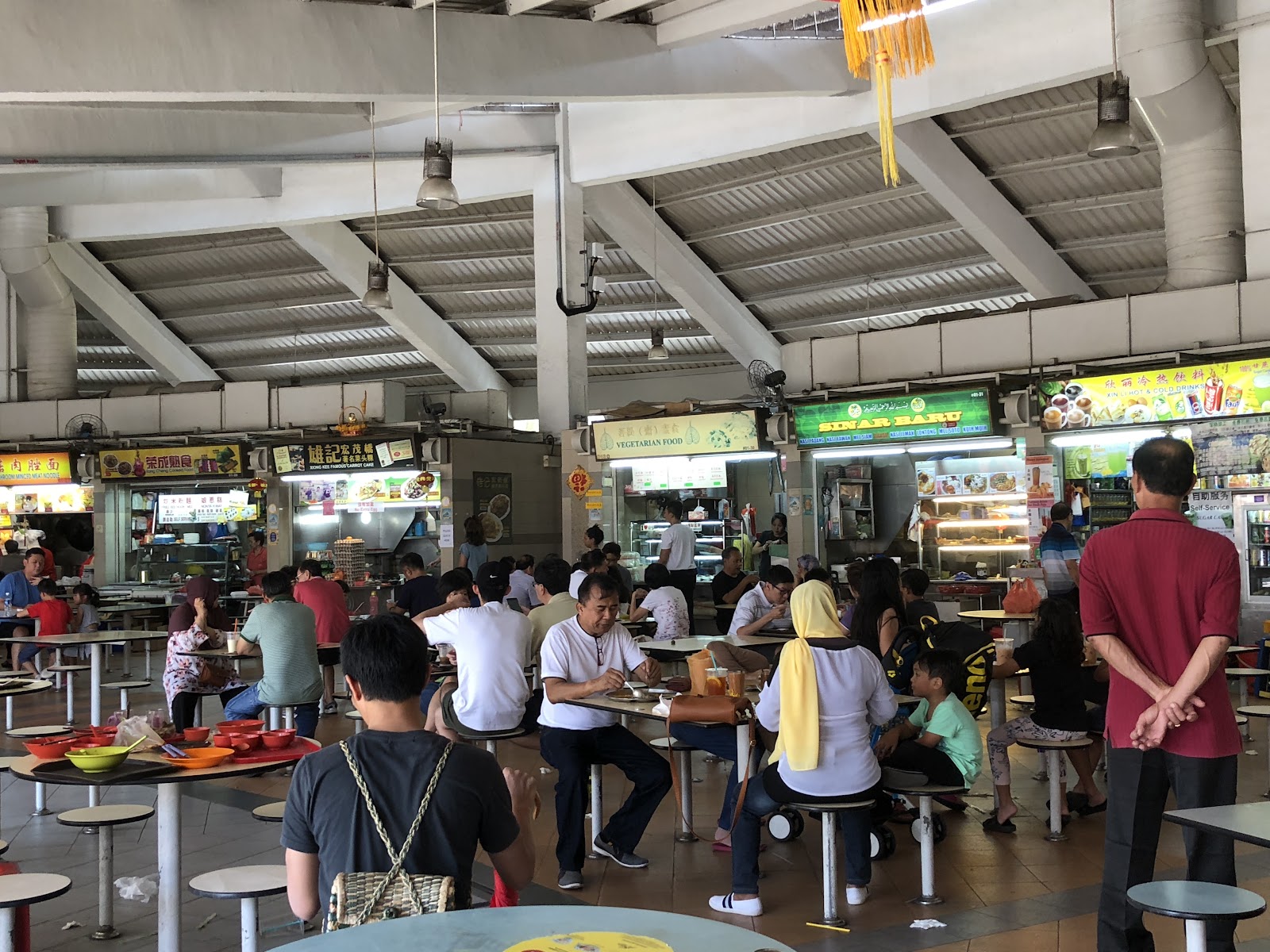 At first glance, it seemed like just another Saturday afternoon.

The dancers were certainly easier to spot when they were standing up among the crowd, one could only imagine how much easier it would be to do so if they are wearing costumes that made them stand out. The same could be said when they came closer and moved collectively. 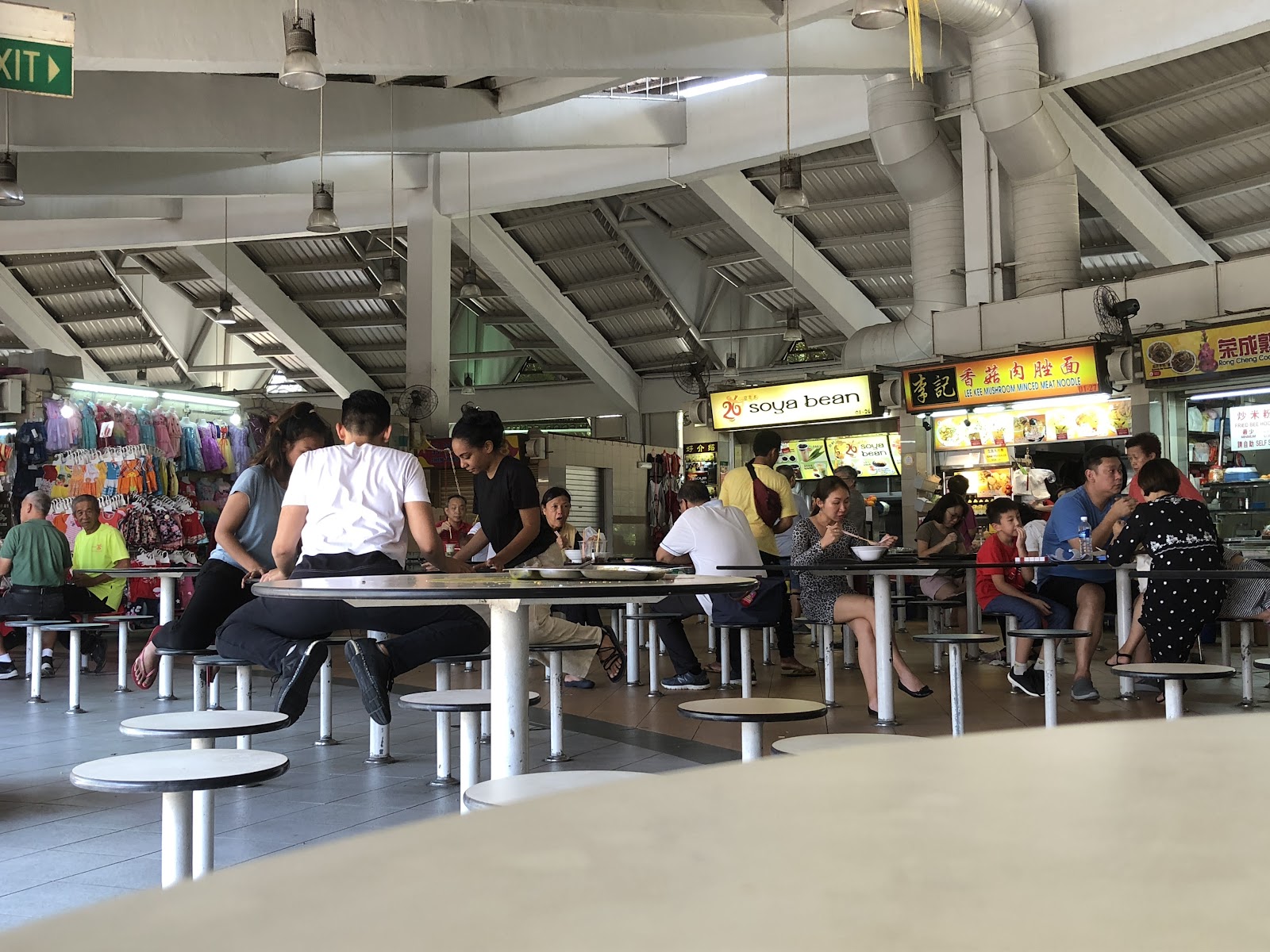 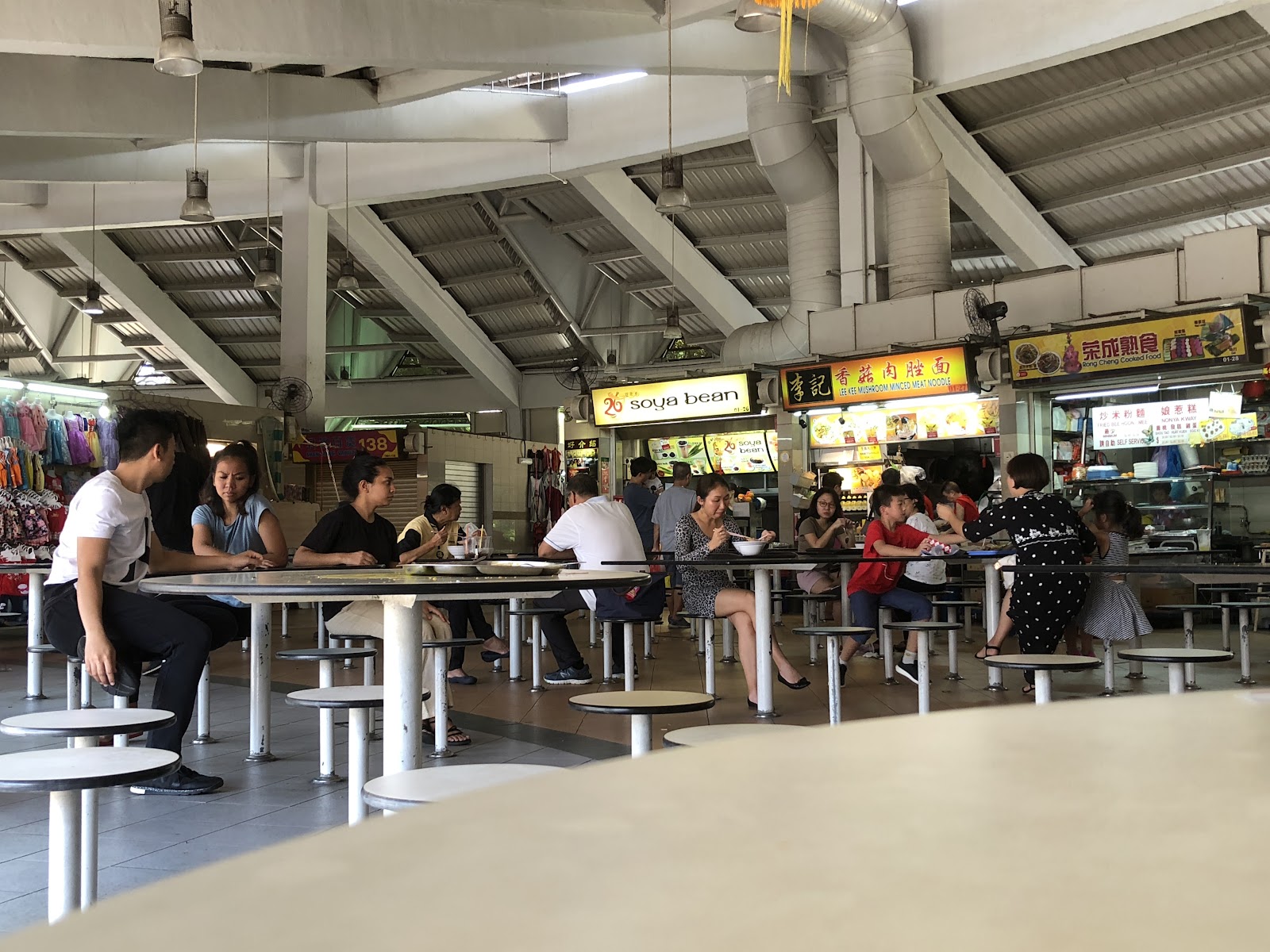 The lady in the grey dress gave curious, awkward stares as they were at the adjacent table, even after they sat down.

There were similar observations of the audience where they would be more comfortable to watch the dancers from afar, and would rather look away when they came closer, which could be an indication that they would prefer to watch than be engaged or part of the performance. Or they simply thought that the dancers and their actions were weird, awkward or even crazy. 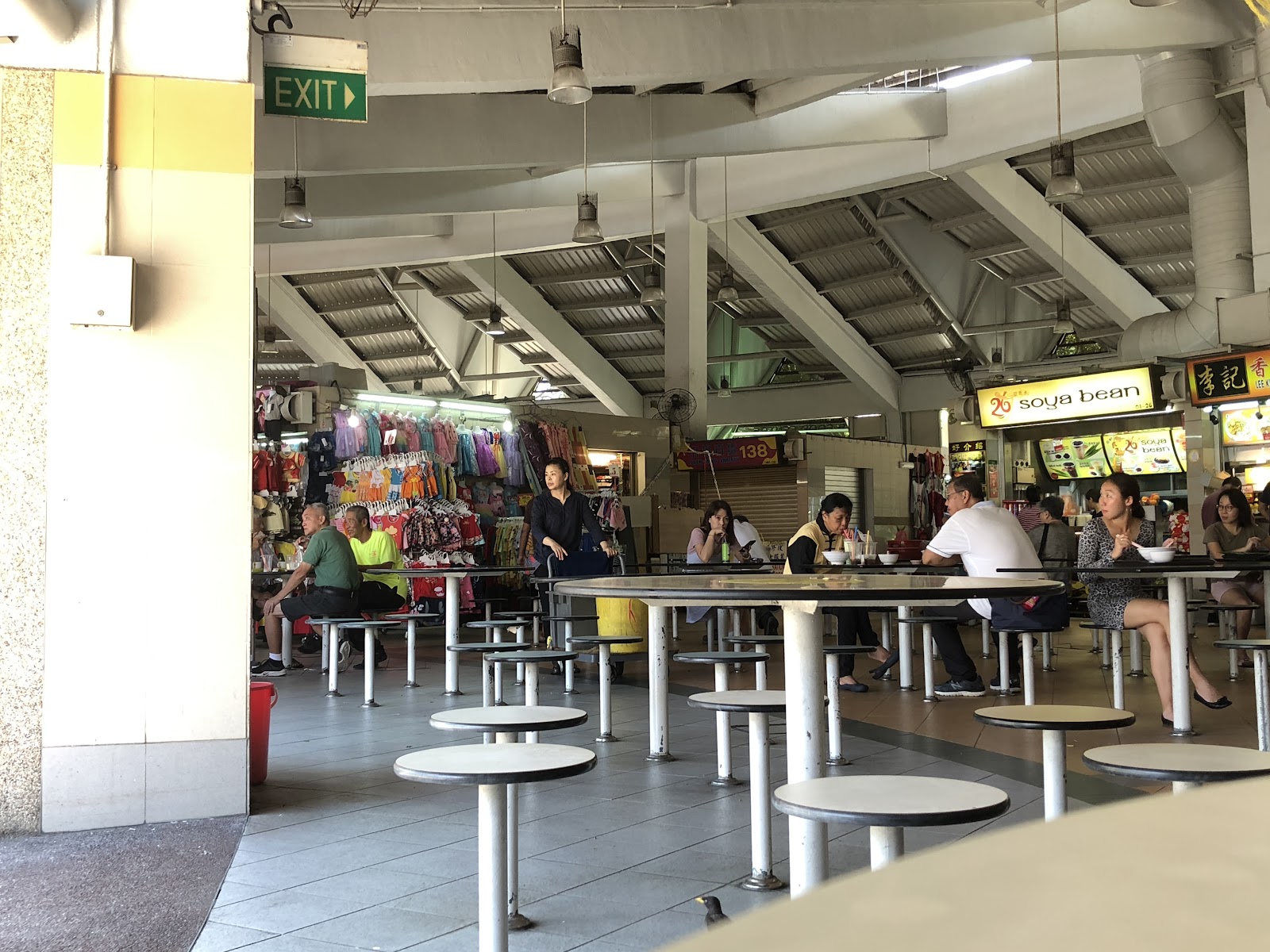 Only when the dancers moved away did the residents look at them.

Once the dancers reached the other end, Haizad gathered them for a debrief. He pointed out that Hasyimah usually sticks out, drifted away or is isolated from the group. They also discussed what they observed from the residents; how they reacted as they walked past like what was mentioned above, the soft whispers and comments that they picked out from the noise, and the different types of looks, glances, stares and glares that they sensed as they went about with the imitasi.

Hariz mentioned that when they were sitting in a circle and faced each other, “Who and where is the leader?” since imitasi required those behind to follow the actions and movements of the one in front, all without verbal communication. I believe this is where the silent negotiation between the dancers come into play; what happens when everyone yet no one is the leader, how do they carry on from there?”

After the debrief, Haizad instructed them to carry out another round of imitasi, this time with Rizman accompanying them with beats from his darbuka, a goblet drum. He would be following the dancers by being in the center of the triangle.

This time, Haizad wanted the imitasi to have more dance elements to it, rather than simple movements like the first round. Chloe suggested having visual cues or signals to stay subtle compared to loud music which would draw a lot more attention and Hasyimah suggested that they should pick up objects along the way, to which she added that she had the impulse to clean and tidy up the hawker center in the midst of the first imitasi. 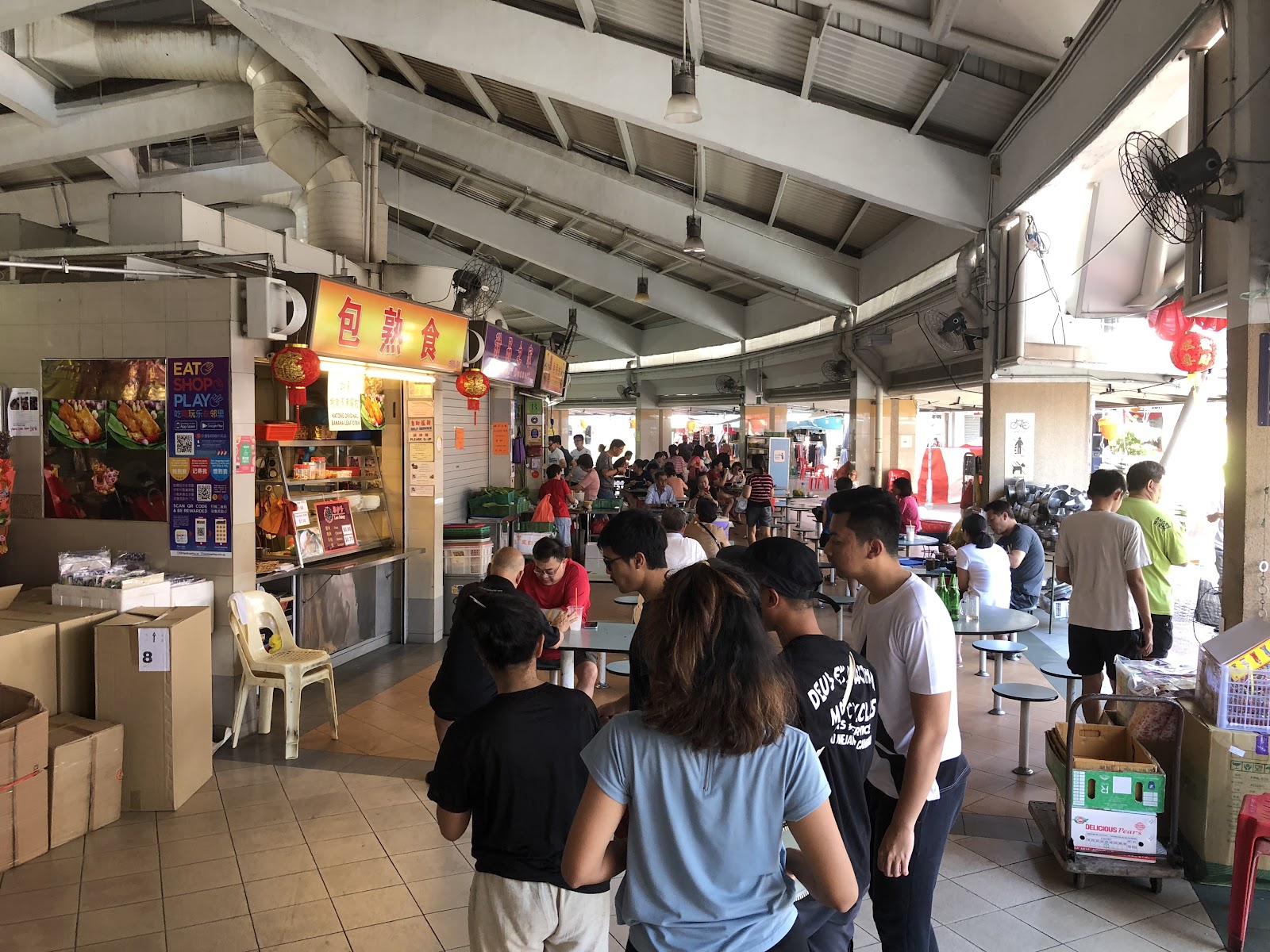 As they proceeded with the second imitasi, the accompanying music definitely grabbed the attention of the residents, which probably helped them perceive it as a performance more compared to the previous round, as that is what they are presumably accustomed to (music + movement = dance performance). Either that or they already witnessed the first imitasi so they are more aware that something is taking place. Some of them even recorded videos and took videos of the dancers. 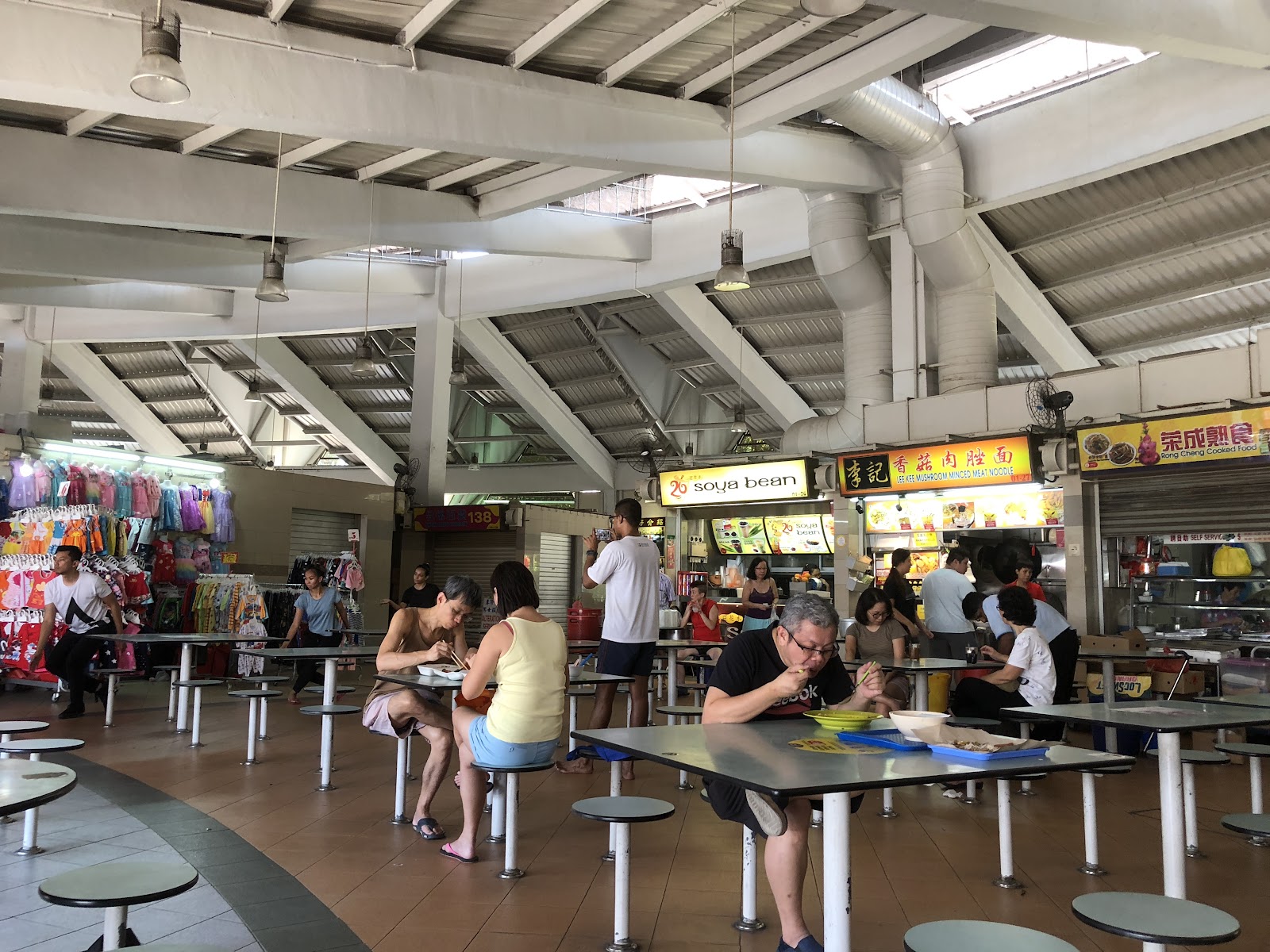 The man in the white shirt recorded half of the “performance”. Perhaps we could have engaged with him and ask how he felt about it. 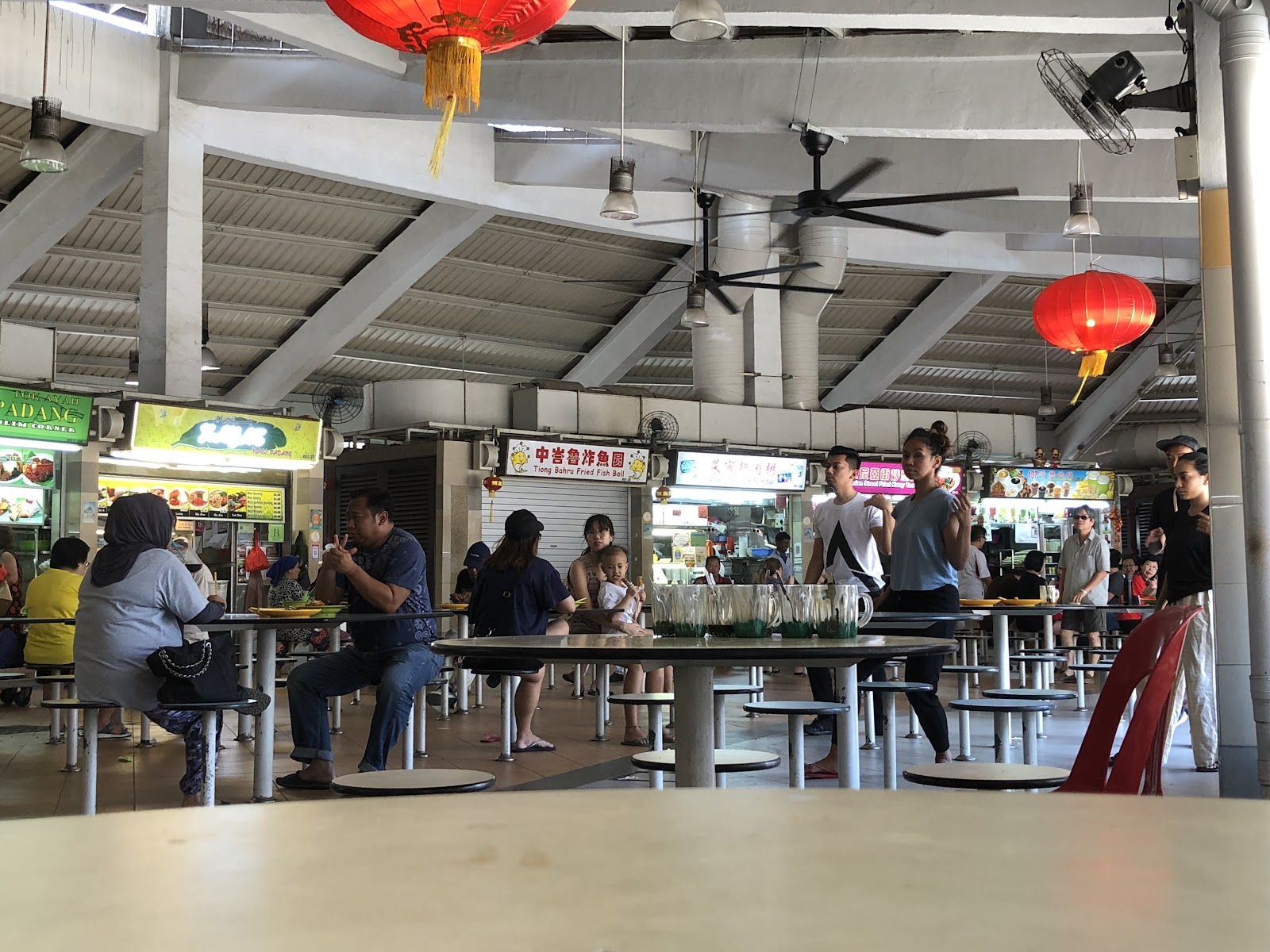 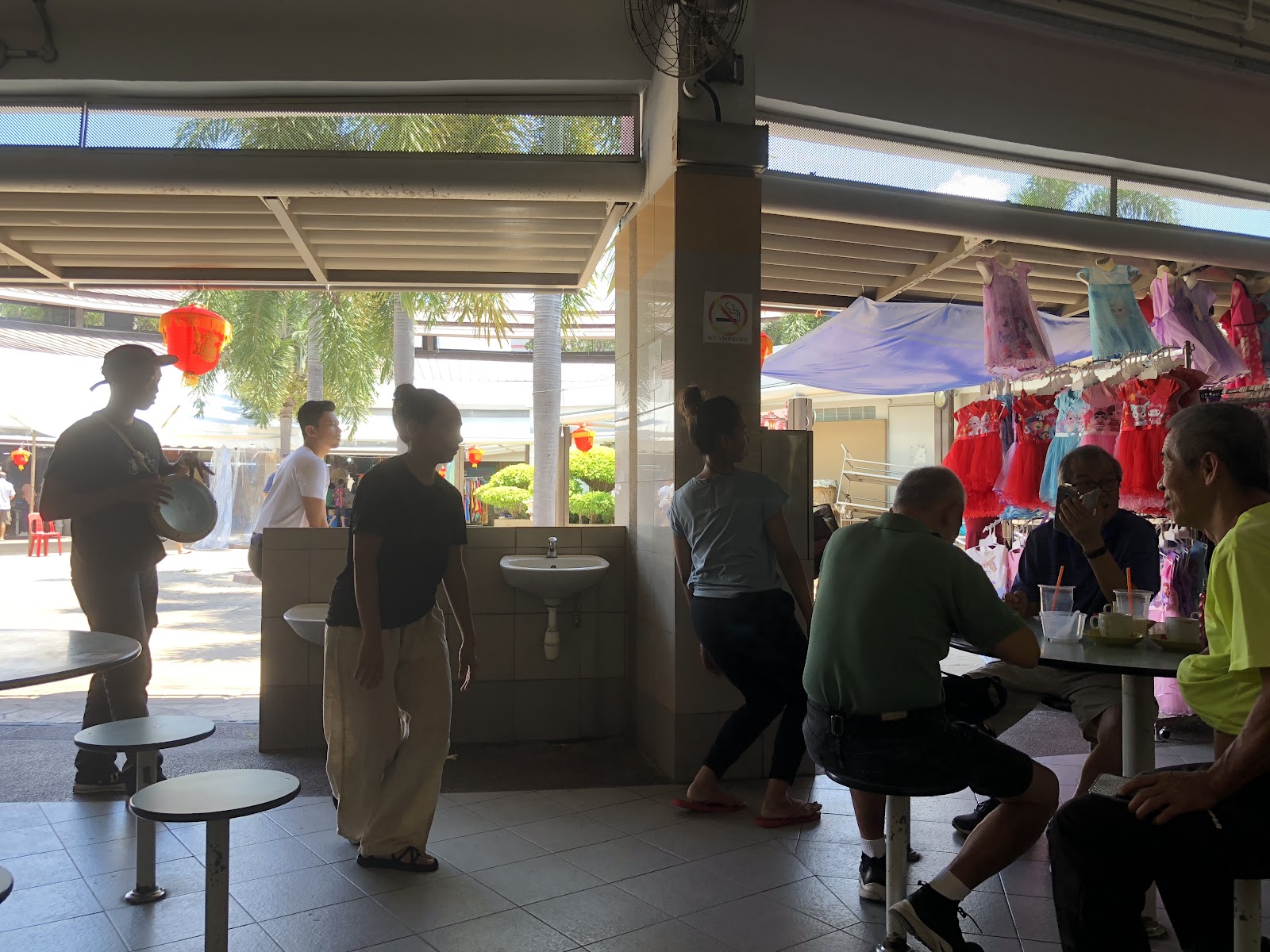 The presence of the music made the movement less alien and more performance. Maybe the music provided the context of why these three people are moving so differently.

There was a moment where the imitasi went in to the center of TRMFC. Recalling the activity from the previous rehearsal where everyone “watched a performance”, this time there was an actual and intentional (yet spontaneous) performance taking place, while the audience already had seats. As this was taking place, a realisation came up; the residents had a choice in deciding whether they wanted to be an audience and be engaged or they could choose to ignore what was happening. 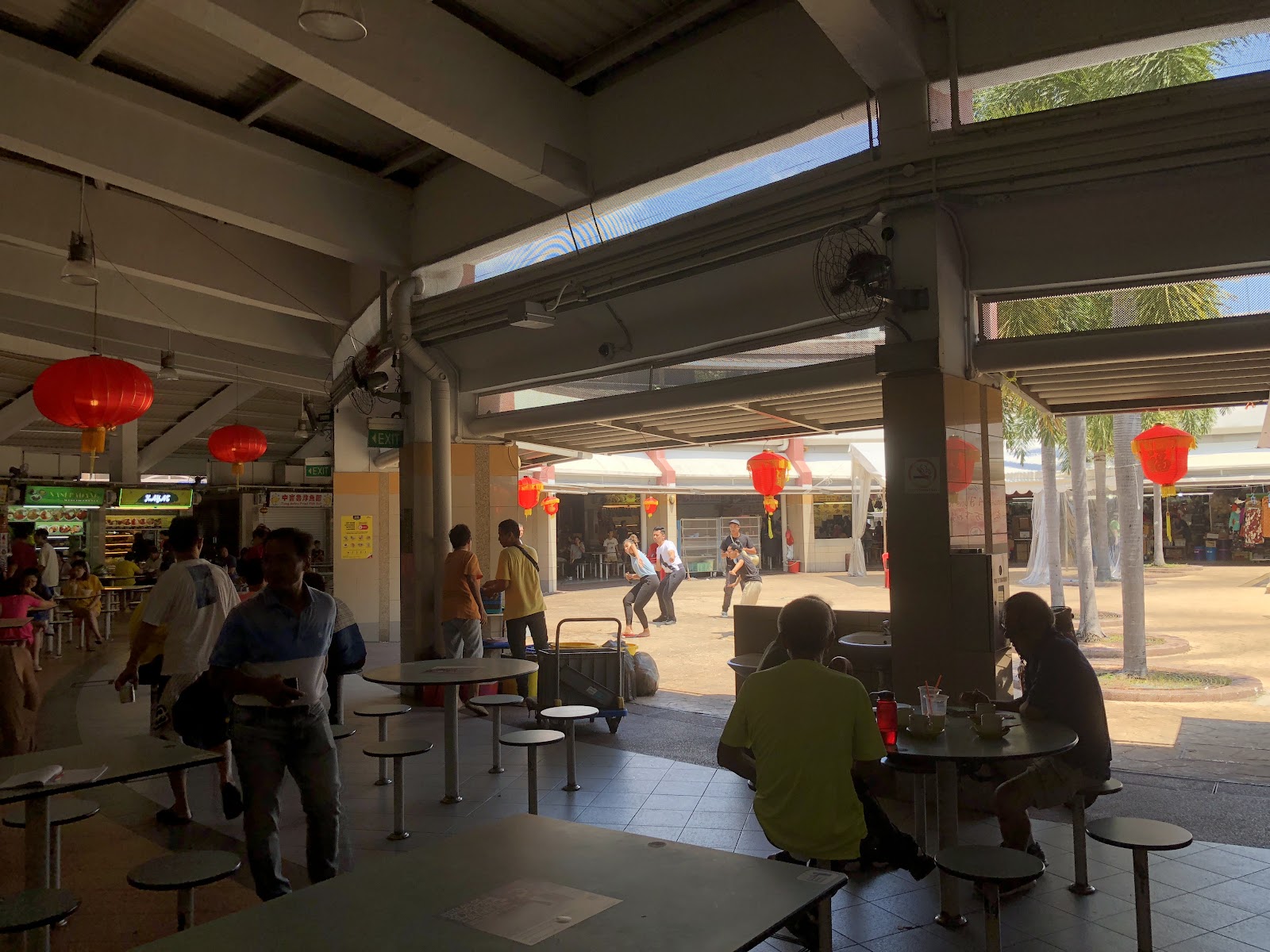 Similarly, after the dancers reached the other end of the hawker center, Haizad asked everyone to gather at the now empty tentages that were previously stalls selling house decorations for the final debrief. 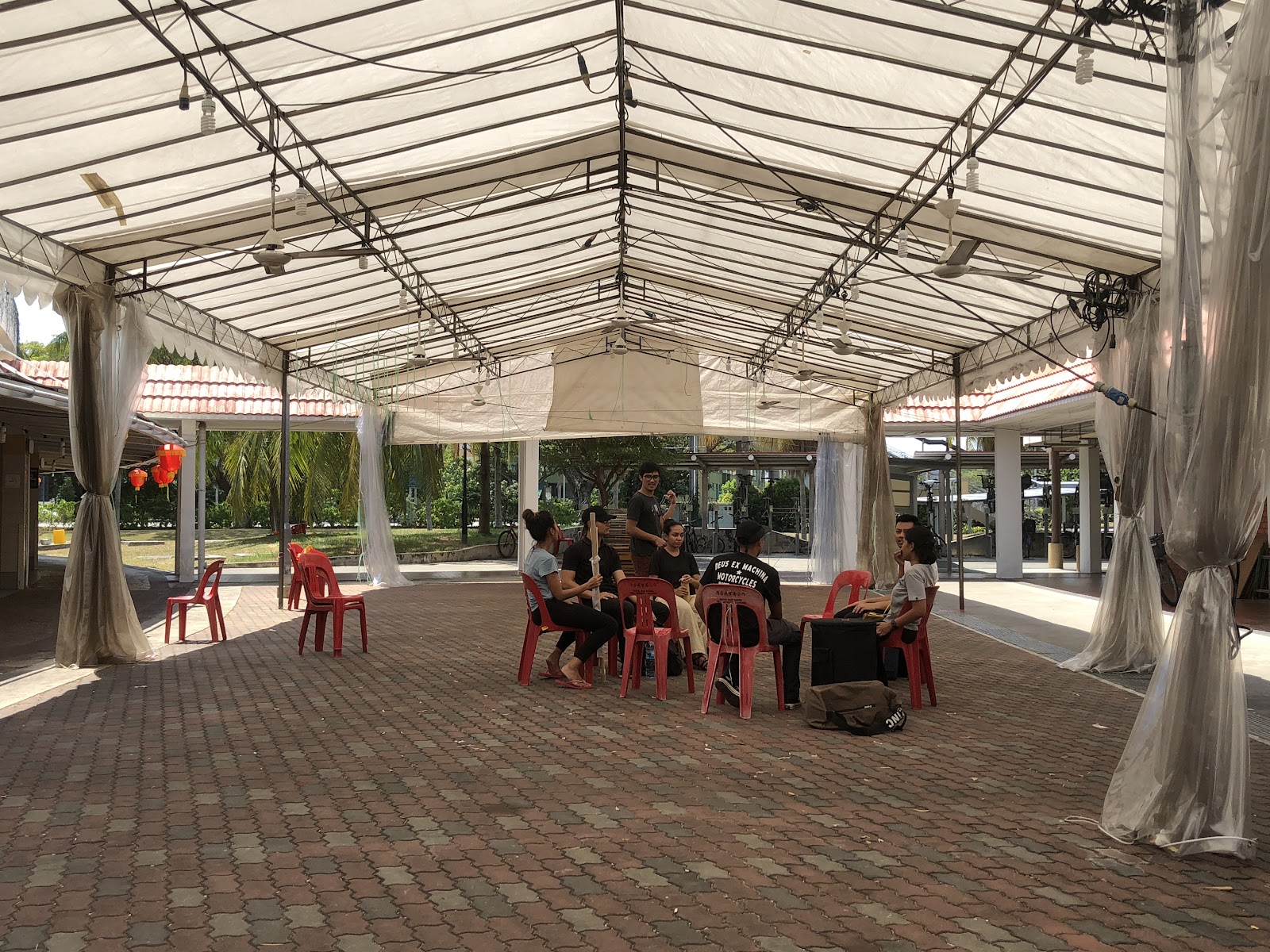 The vacant tentages with chairs served as a conducive space to discuss and debrief.

Before the debrief, Haizad wanted to update the dancers on his choreography notes:

The performers would be wearing/pasting things that are from TRMFC on their costume, about 5-10 each.

They would start out in a bundle in the center segment (possibly as part of the visual installation), and they would come in from different directions to wear them before dispersing into their separate groups as established during the previous rehearsals.

Chloe suggested having an exchange of gifts or small items with the hawker stalls, so both parties have something to take away from the District 18 process. Haizad reiterated that he liked the banana folding with a stranger (hawker or resident) and exchanging that as a gift. After the updates and some discussion of materials and items they could use, they proceeded with the debrief: Haizad shared that he overheard an elderly Chinese man saying that the performers had “No budget for lion dance.”

A Malay lady asking her friend to join to which her friend replied in Malay, “I only do dangdut lah.”

Another man commenting that it was a cheaper version of kuda kepang. Rizman shared that this was his first time performing without a stage and performing in this concept. He felt the energy in the triangle and felt that the darbuka helped with that.

Towards the end of the second imitasi, he sat down on an empty chair (as there was a spatial restriction for him to stand in the center of the triangle) with a table that was occupied and had to explain that it was a performance to the residents, after which they were more understanding.

Azreen also shared the same opinion of it being her first time performing/being present in such setting.

Haizad shared that NAC wanted a loud introduction or announcement to start off the performance, however he would prefer the performance to start unknowingly, and amidst the unsuspecting residents.

Hasyimah mentioned that we should open our senses to the site more rather than constantly training in a studio or theater and not force a performance (i.e. do we because someone asked to) as it could happen anywhere at any time.

There was then a short discussion on what would be the best way to cue the start of the performance; from musicians? Movement cue? A visual cue? On that note, everyone was dismissed from the rehearsal.