The costumes have mostly been made, and Hasyimah and Othman (the production manager) are finishing up the rest. This time, one of the trolleys has fairy lights coiled around it, and the rest would similarly done. 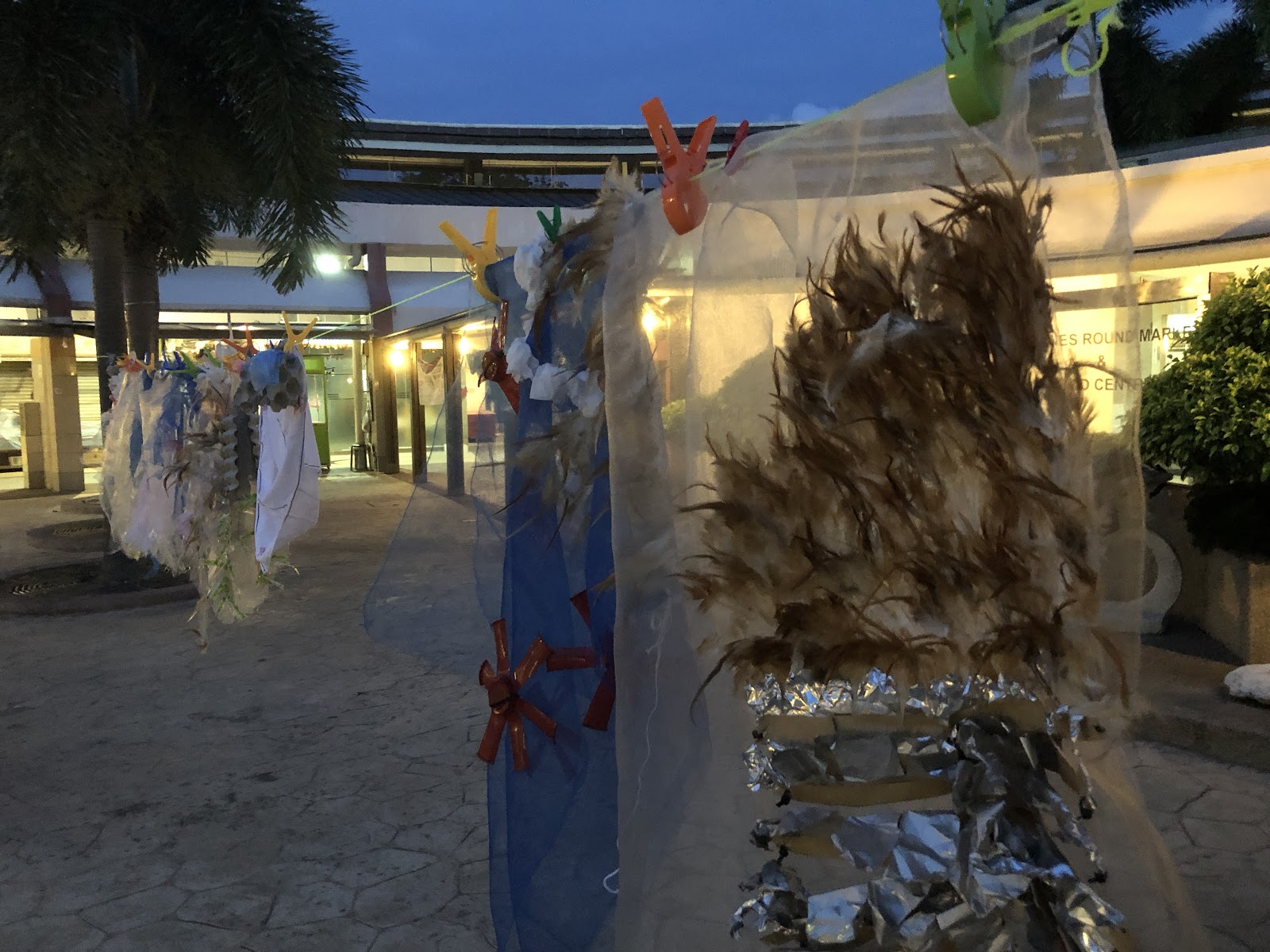 The costumes would be preset on a clothesline in the middle of TRMFC. 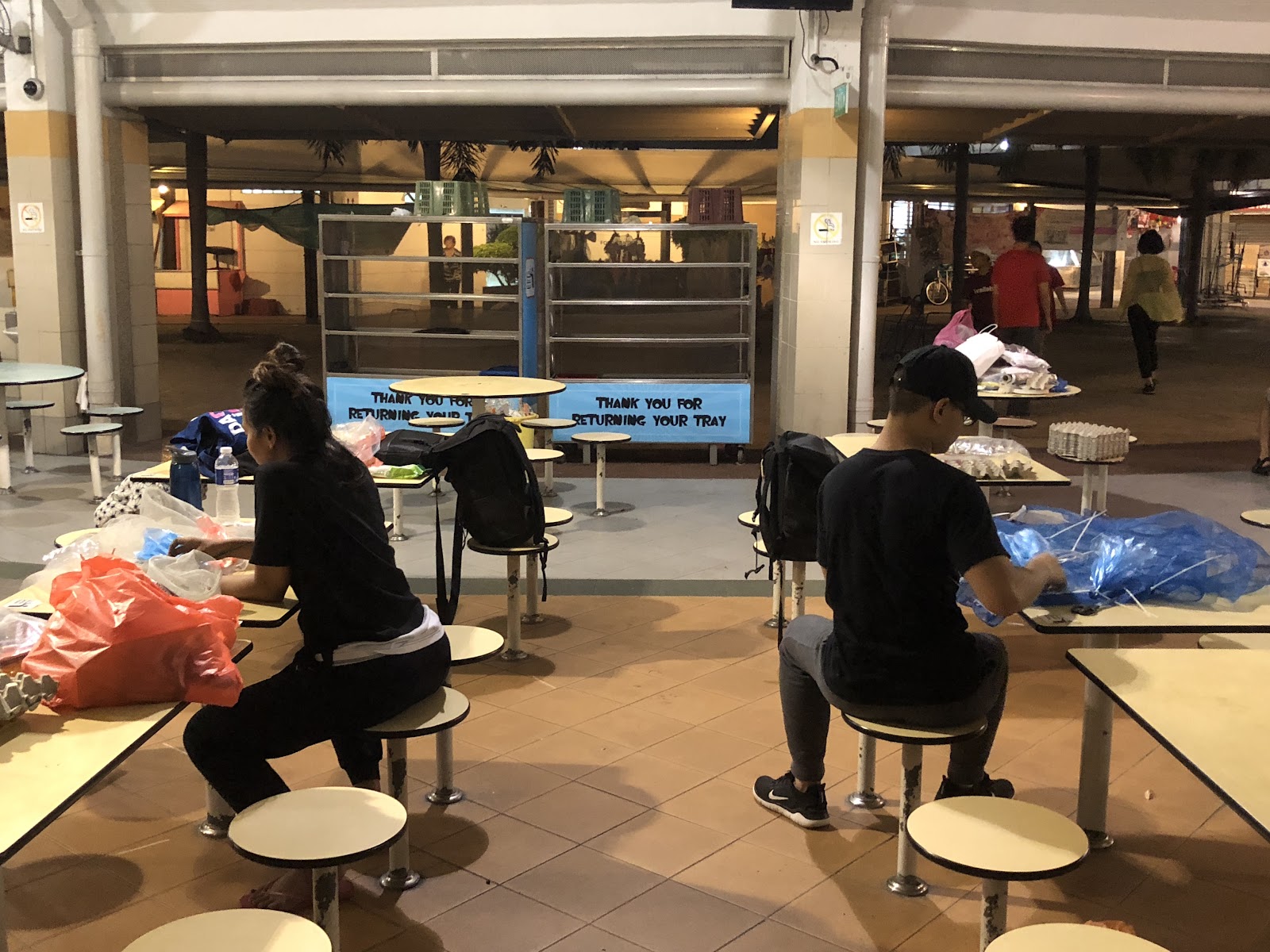 Cik Sarimah (from Kayat Nasi Padang) approached Hasyimah and suggested a way to attach some of the materials, adding that she would also pass her extra plastic bags if there were any.

Haizad firstly gathered the dancers to introduce them to the costumes and let them choose/try out. Since the costumes are made of translucent mesh, their innerwear would be bright and plain coloured tops. In addition, they would also have accessories such as headgear and bracelets placed inside the trolleys at the start of the performance. 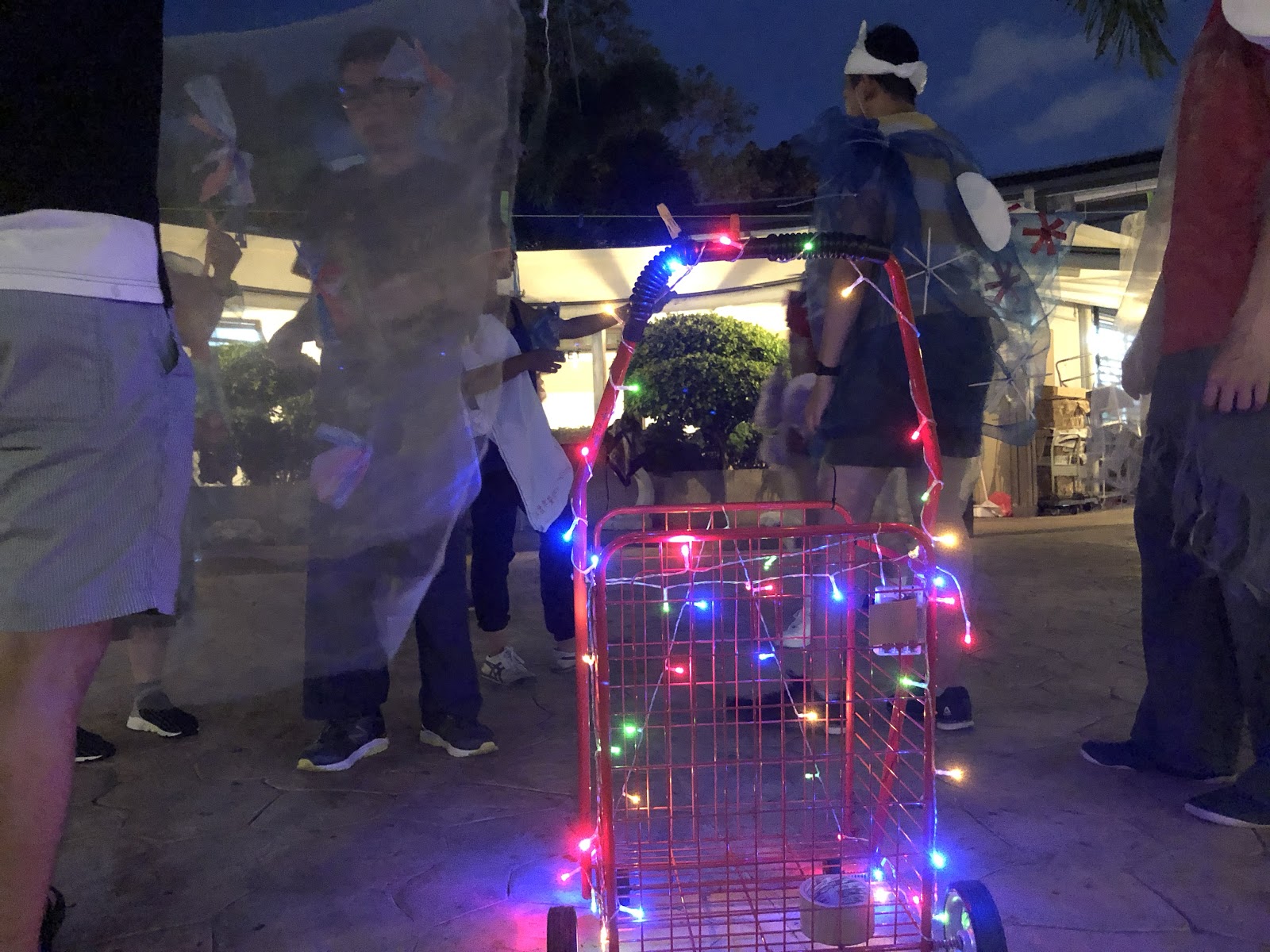 Haizad called it the “magical trolley”.

He also briefed them that he would first be discussing with Aameer about the songs and sounds used, while the dancers are to recap and learn the choreography to Ji Ba Ban as well as update each other about Segment 2 to those what were not present previously. While they were recapping the choreography, Aameer played the song through the speaker for them. As they were rehearsing, some of the hawkers came over from the outer side of the hawker center and some even started singing along. After discussing with Aameer, Haizad then came in to facilitate the dancers in recapping. 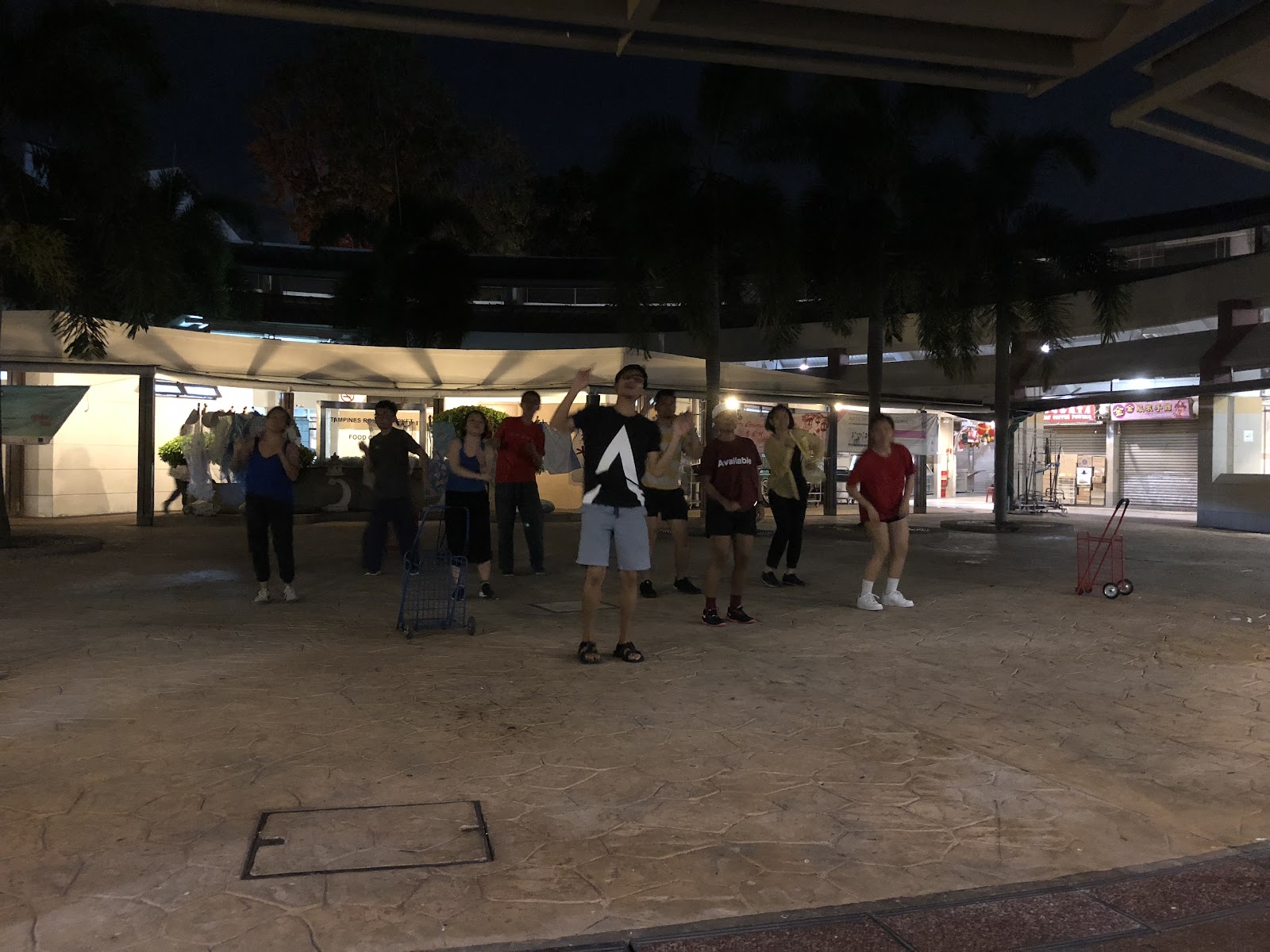 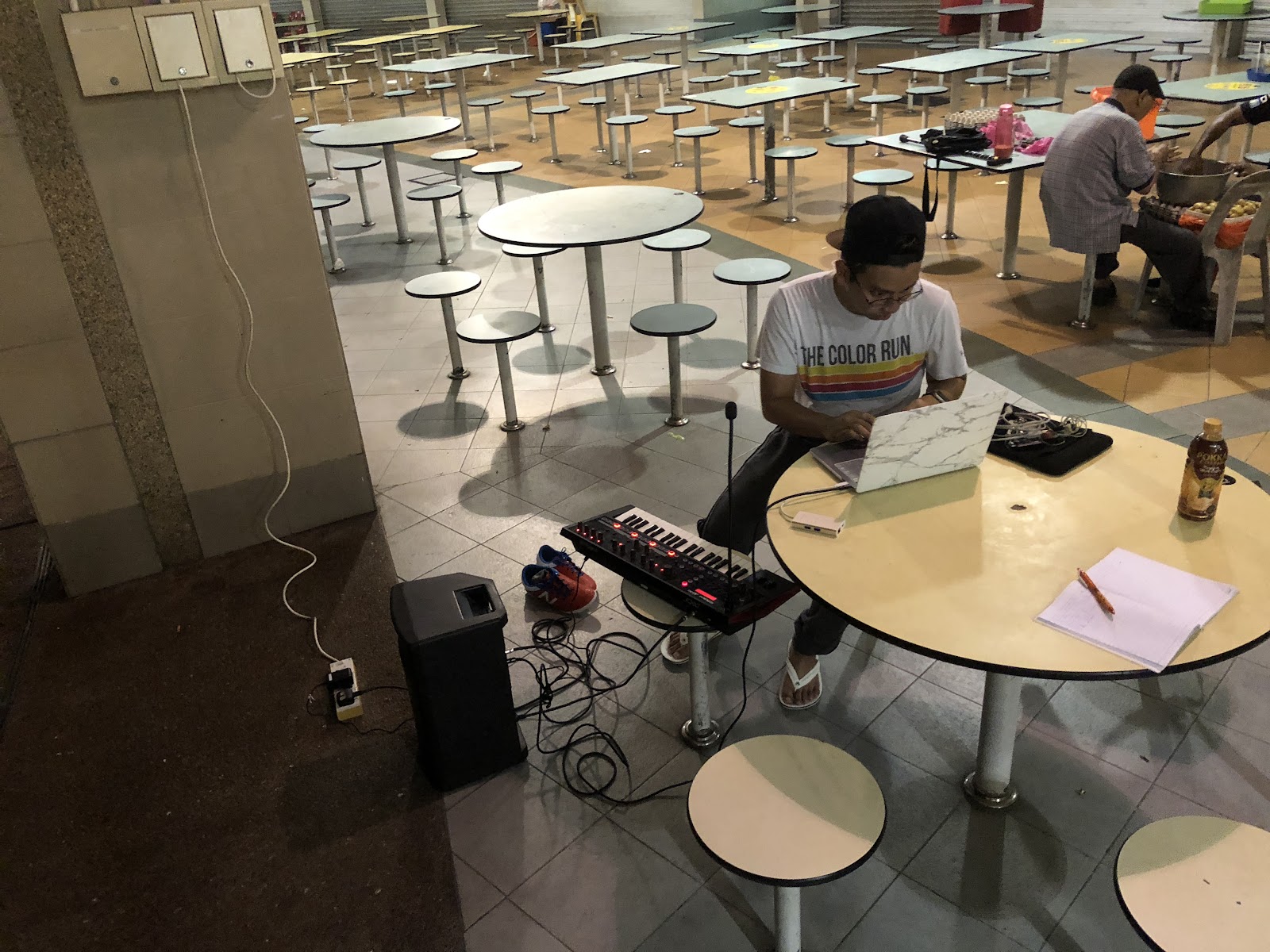 Recalling the choreography with assistance from Aameer, which inevitably attracted the attention of the hawkers.

Haizad then wanted to try from Segment 2, along with Sonia using the microphone to announce the numbers for the lucky draw segment. He also wanted to simulate the percussionists “battling” at the end of the segment that would then transit into the next one. 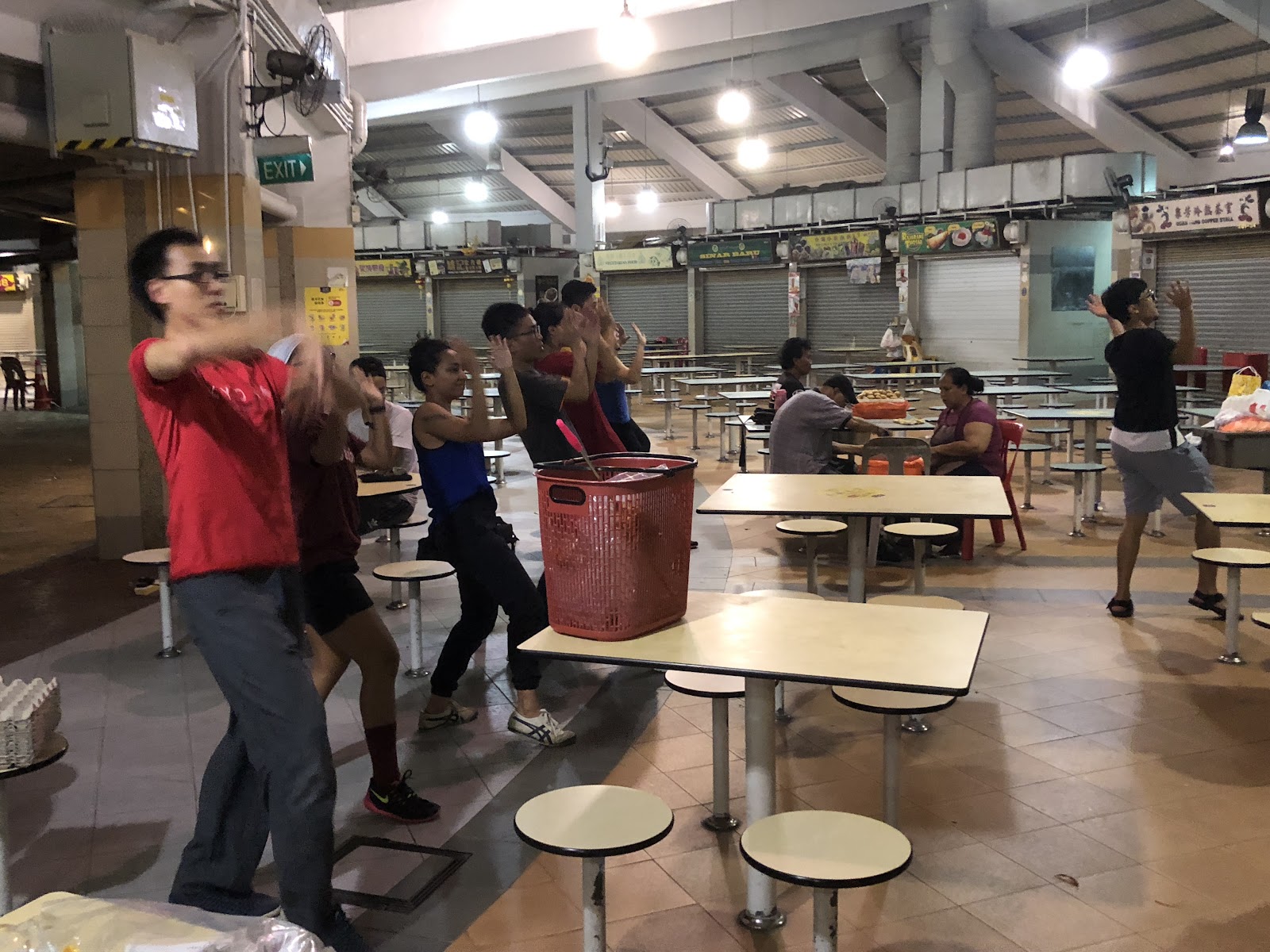 After they finished practicing one round of the second segment, Desmond went through the two lines that the dancers have to sing out loud during Ji Ba Ban and they also recapped the timing of the clapping. 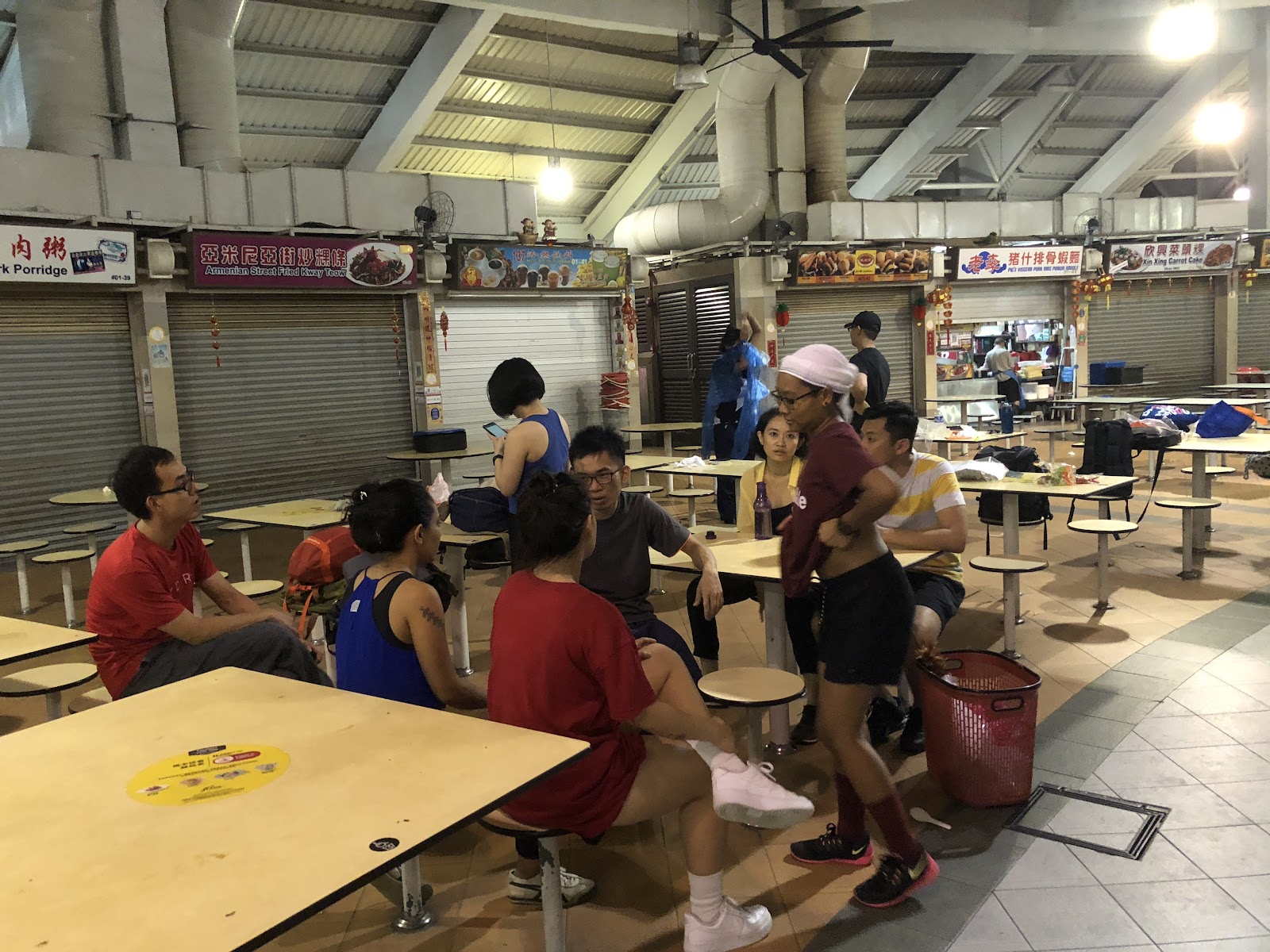 Even though there are only two lines, they are determined to do it as best as they could.

For the remainder of the rehearsal, Haizad then wanted to have a full run of the performance, from the very top till the very end. It would be the very first full dress run, including the costumes, trolleys and music/audio. 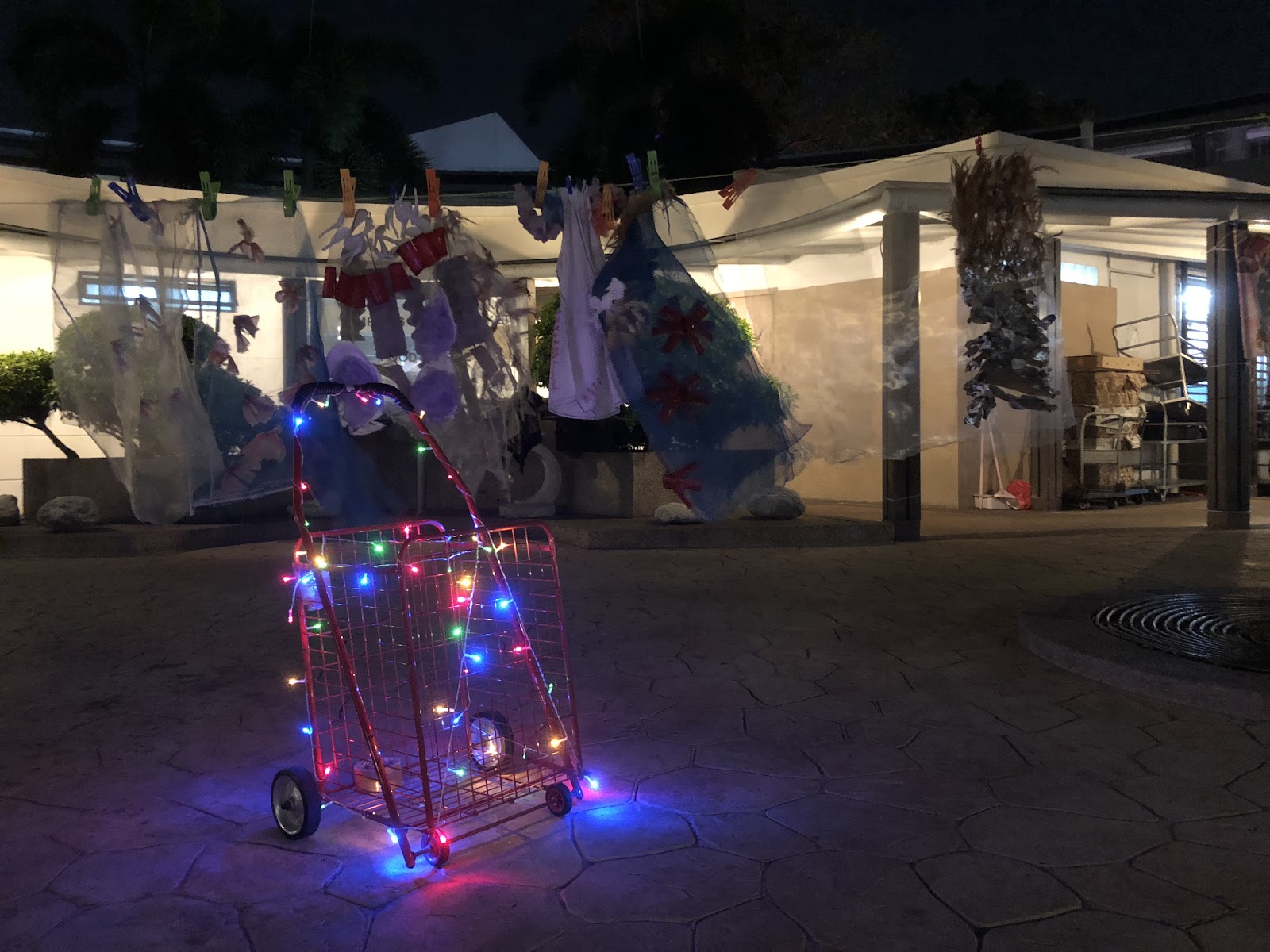 Everything was ready for the first full dress run.

A few observations and thoughts as the full run was taking place:

The ambient sounds/soundscape were similar to those found underwater, perhaps as an emphasis on the alienation of the dancers (how the deep sea is full of strange-looking creatures) or it could possibly be the sound of bubbling oil/boiling water.

The distorted words, which were the names of the stalls around TRMFC; familiar yet alien.

Theme of “familiar yet out-of-place” was prevalent throughout the performance;

Some of the hawkers came over and stayed to watch the rehearsal. 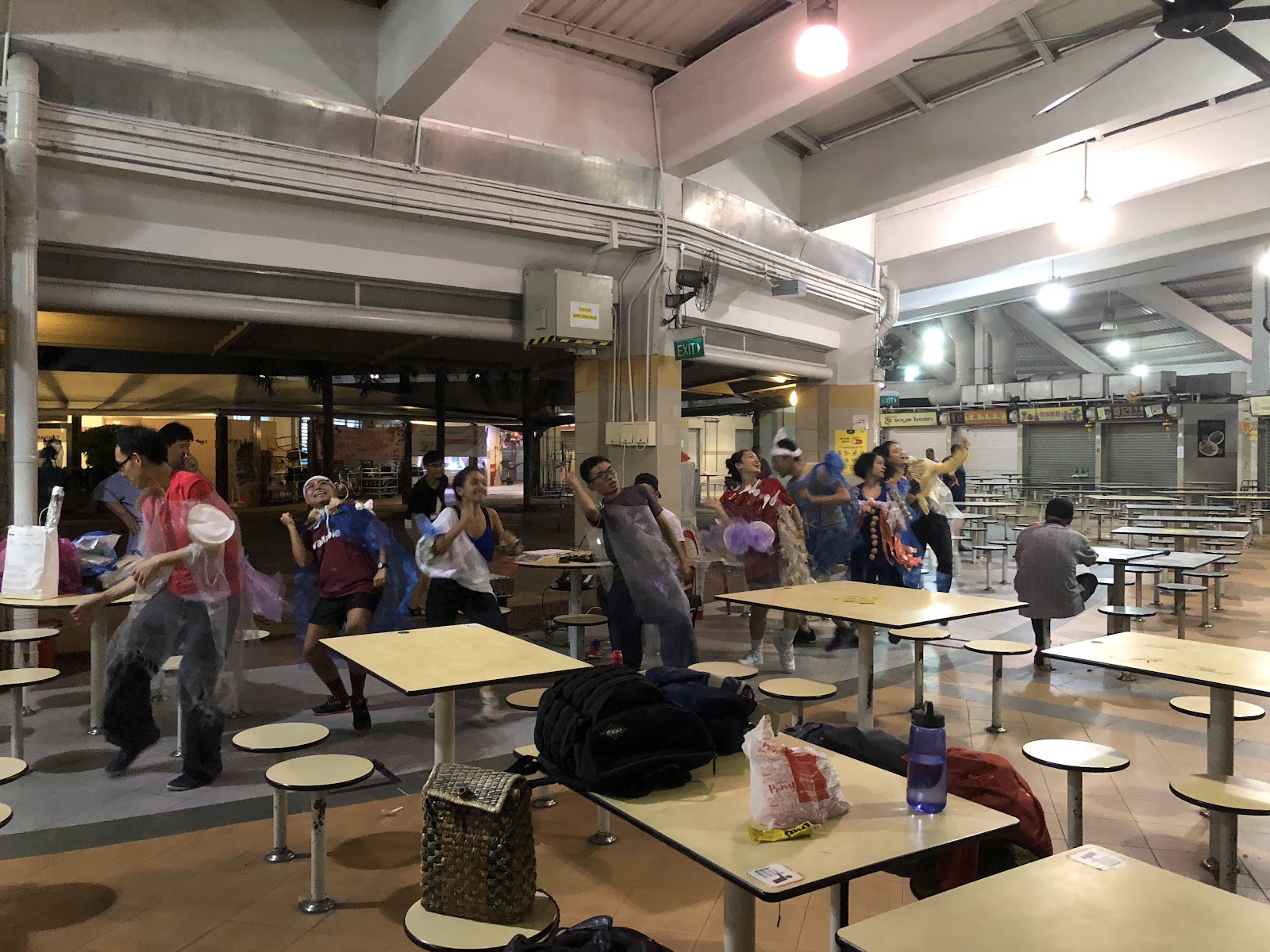 At the end of the full dress run, Haizad gathered the dancers for a final debrief.

Clarified some details of the performance, such as the cues and blocking.

Checked if the costumes are okay and if they can be enhanced. 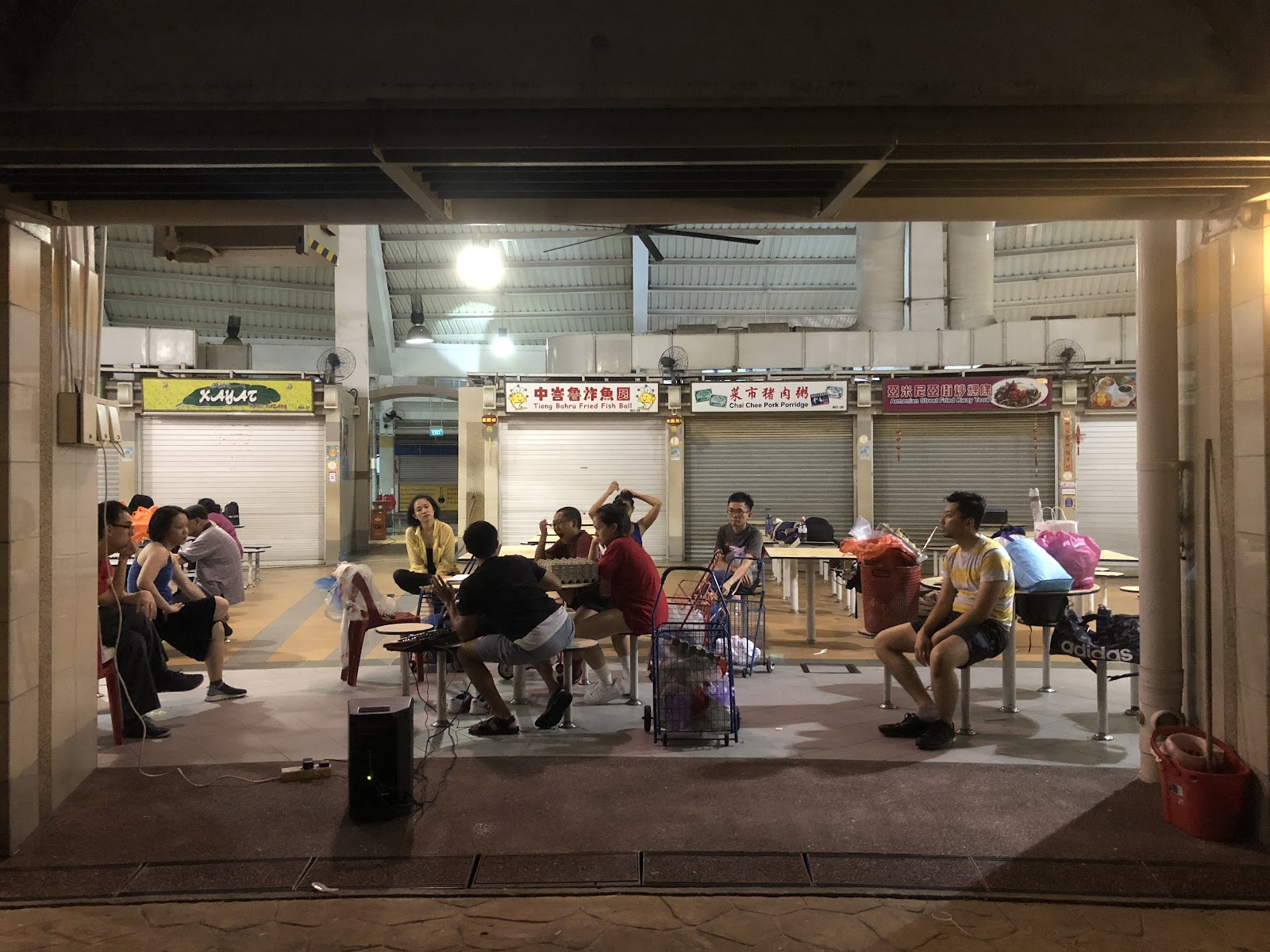