It was the first rehearsal with Daryl, the Stage Manager, present. Haizad went through the placements of the trolleys & costumes as well as the cues in the performance that he needed to be aware of. Daryl then proceeded to spike the trolleys to ensure some consistency. He then updated the dancers about them. 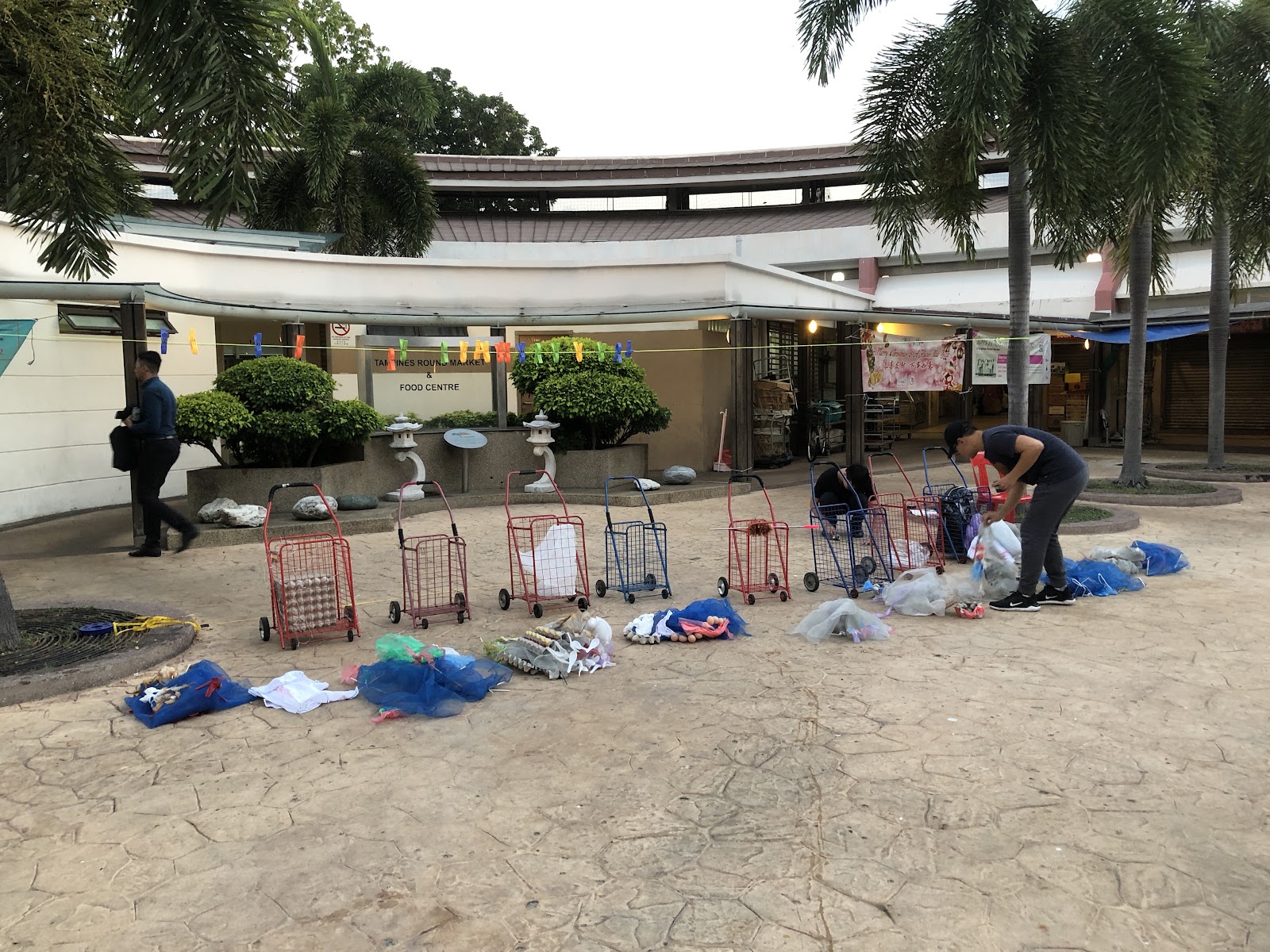 Positioning and spiking the costumes and props.

Haizad then updated the dancers that they would now fold and stack the trolleys in the middle of the center segment at the end of the performance, to be part of the costume “installation”. The performers then finalised their costumes, trying and swapping around, as Ridzman and Shaw have yet to be assigned theirs. While this was happening, Hasyimah was finishing up on the costumes and accessories. 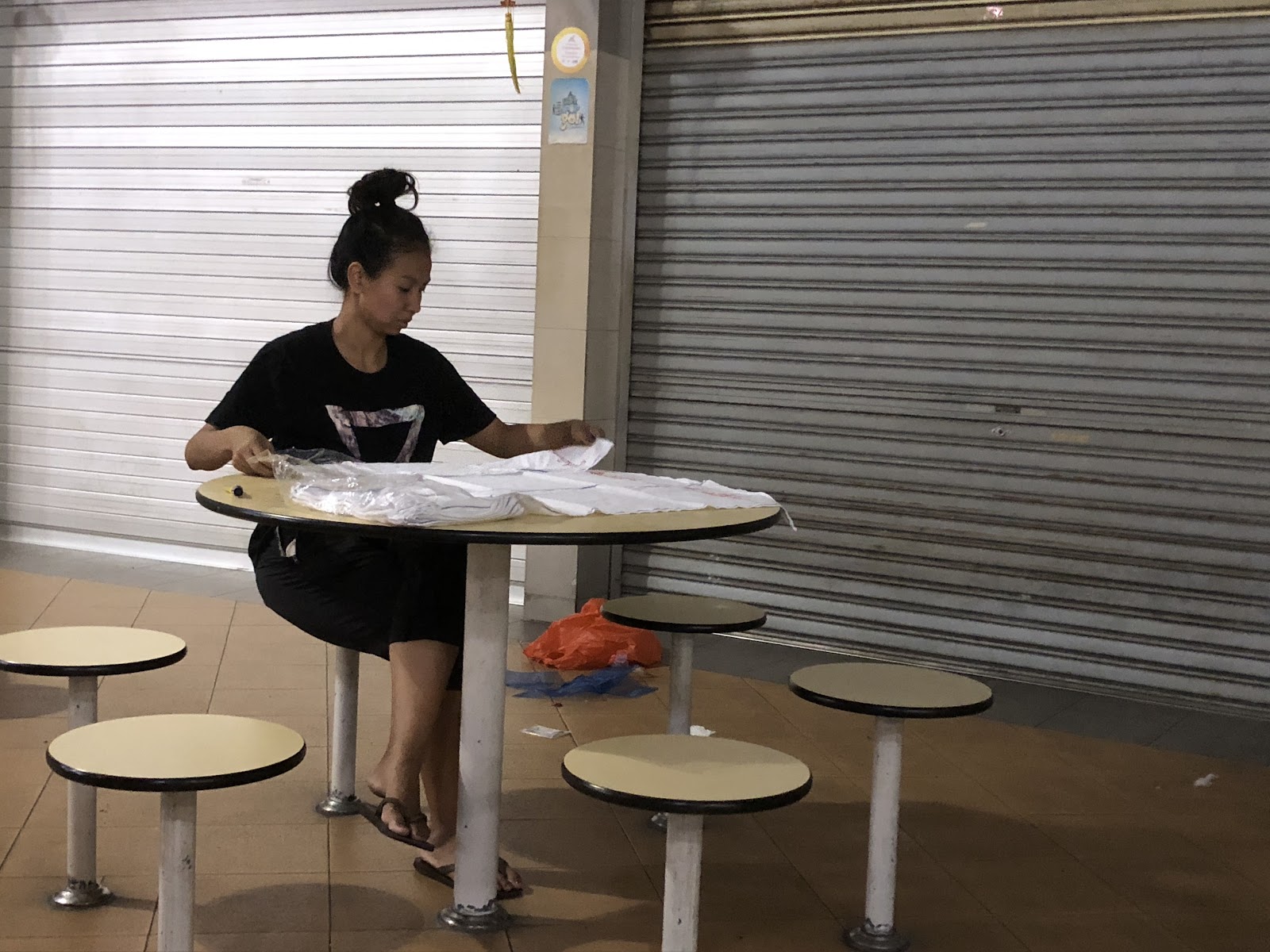 In addition, interviews by NAC & AYN were also being conducted to be used as publicity for the performances. Curiously, it was only a few days before the actual show days, and the effectiveness of conducting the video at this point was questionable. 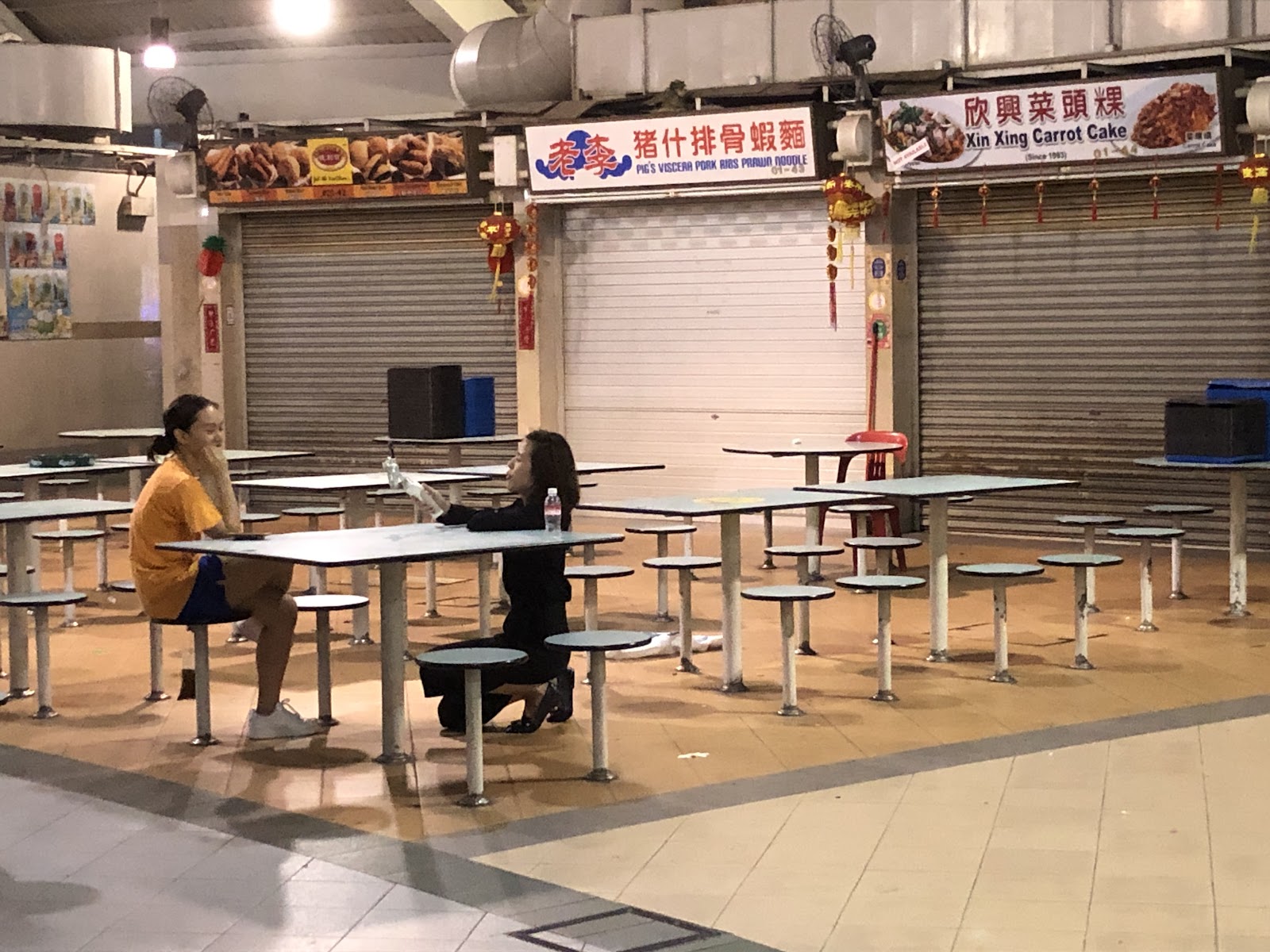 Interviewed by NAC and AYN.

Haizad then wanted to try Segment 2 along with the transitions before and after, which was from the 1 line, the lucky draw and Ji Ba Ban. He also wanted to add that after the “snake” in Segment 3, the trolleys would “push back” on the dancers. 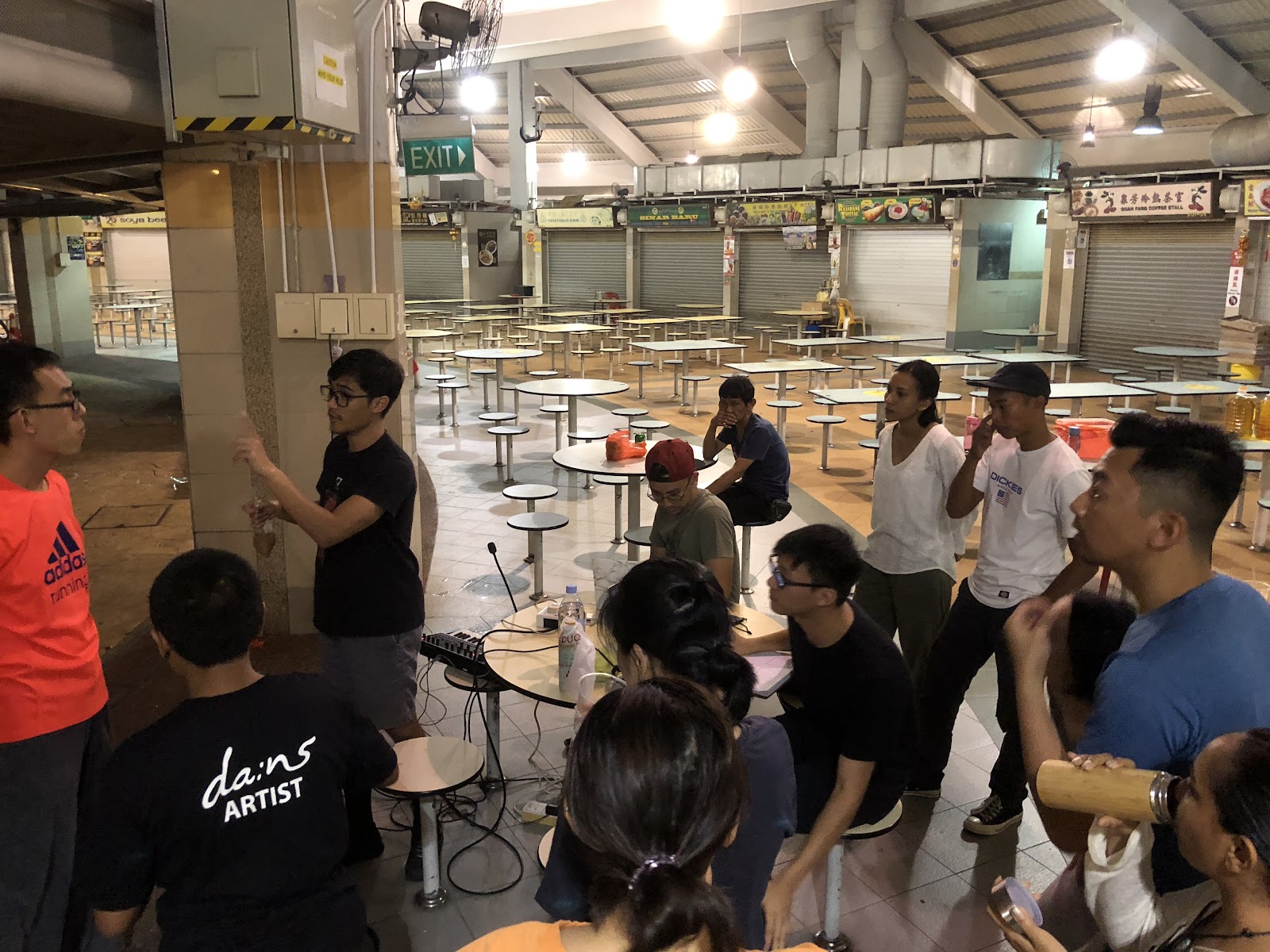 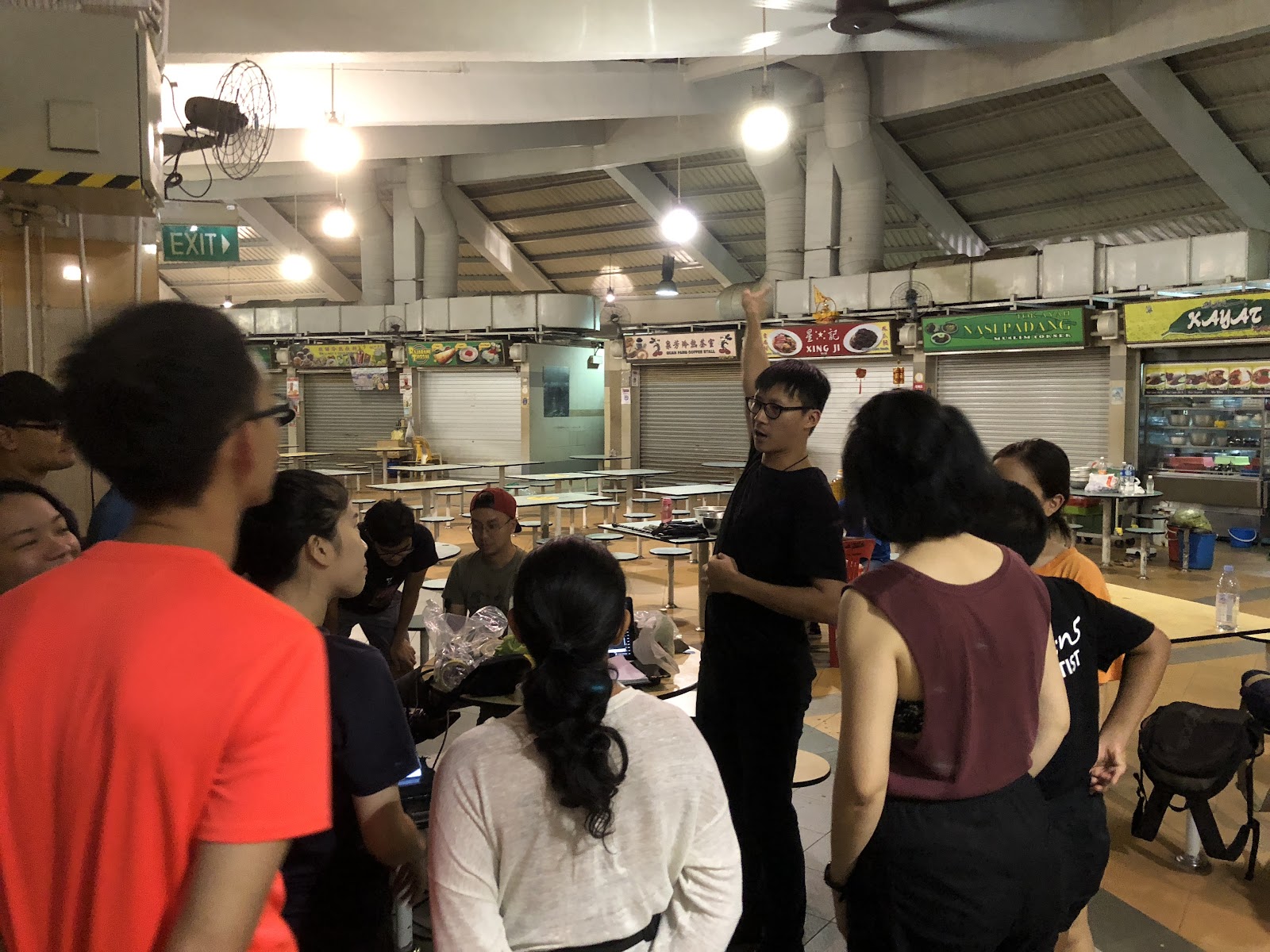 Haizad and Daryl briefing the dancers on the cues and the set up of the speakers before the full run.

Some observations and reflections during the full run:

There was an automated/robotic female voice giving an announcement and instructions at the start of the performance, before the dancers start coming in to the hawker center.

The performance is a roller-coaster of emotions, feelings, and could maybe even evoke different thoughts and memories based on the movement.

It is also two-toned/multi-layered; there are interesting visuals that serve a deeper meaning and purpose.

Aameer seemed to also be taking cue from the dancers in addition to the dancers taking some cues from him; shows the collaboration and how everyone depend on each other to put up the show. 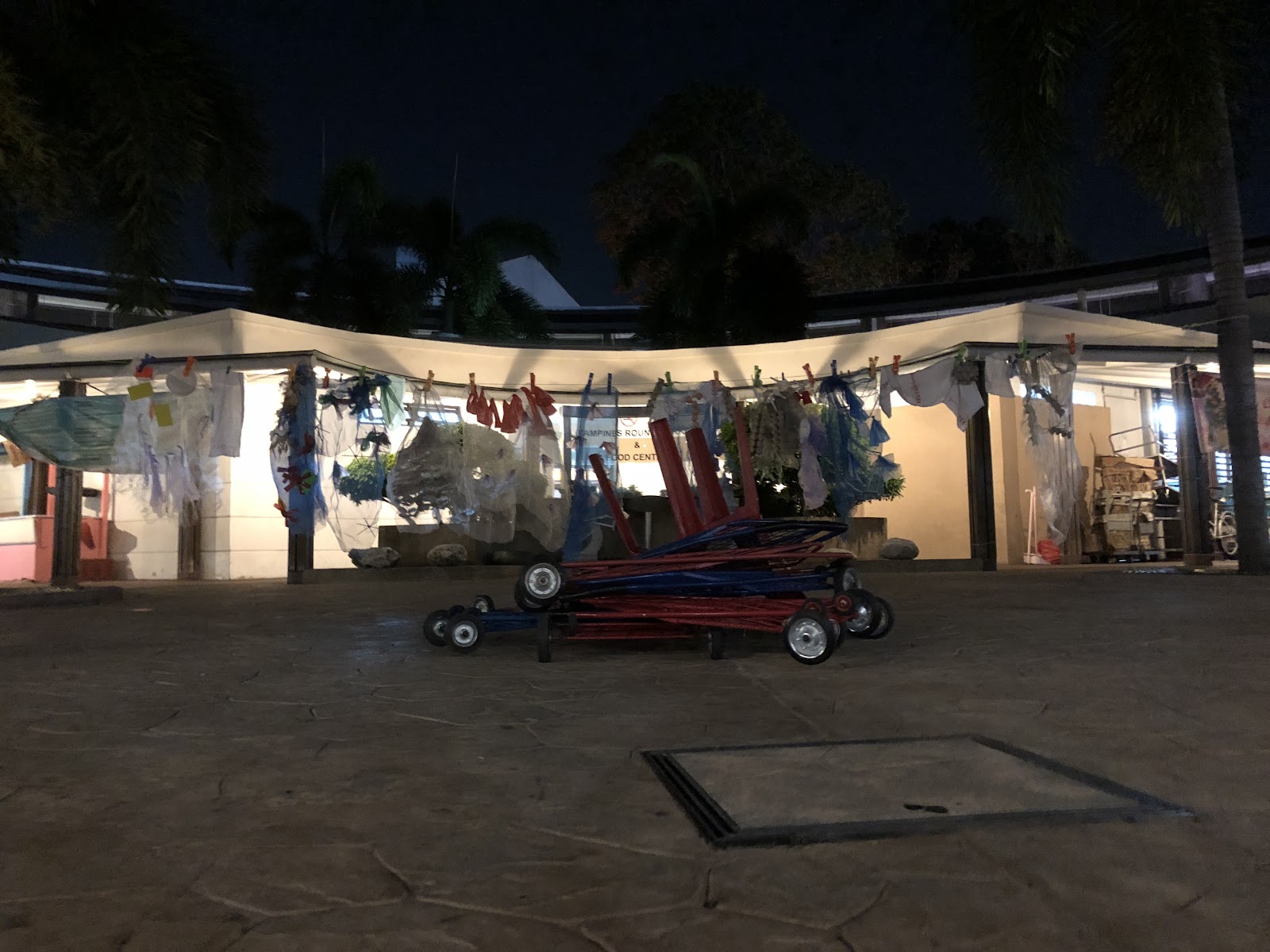 The trolleys would now be stacked in the middle, to be part of the “installation” together with the costumes hanging on the clothesline.

After the full run, Haizad gathered the dancers for debrief and to share some notes:

A cue for the dancers to start wearing their costumes needs to be added so that everyone would be better coordinated during the performance.

A few notes on Sonia’s speech during the lucky draw segment.

Some timings in Segment 2 (such as the clapping) can be improved.

Segment 2 should be “All out party mode,” especially during Ji Ba Ban and the percussionists’ “battle”.

The dancers could add in their own textures and dynamics in movement to the phrase in Segment 3.

It was shown on the dancers’ faces when they were affected or caught off guard by the sounds during the performance, which also affected their movement.

The transition to the percussionist “battle” could be better, perhaps by making their presence more known.

The dancers clarified about them waving in Segment 3, that they actually could wave more than once and as well as disrupt the phrase to wave to the audience. 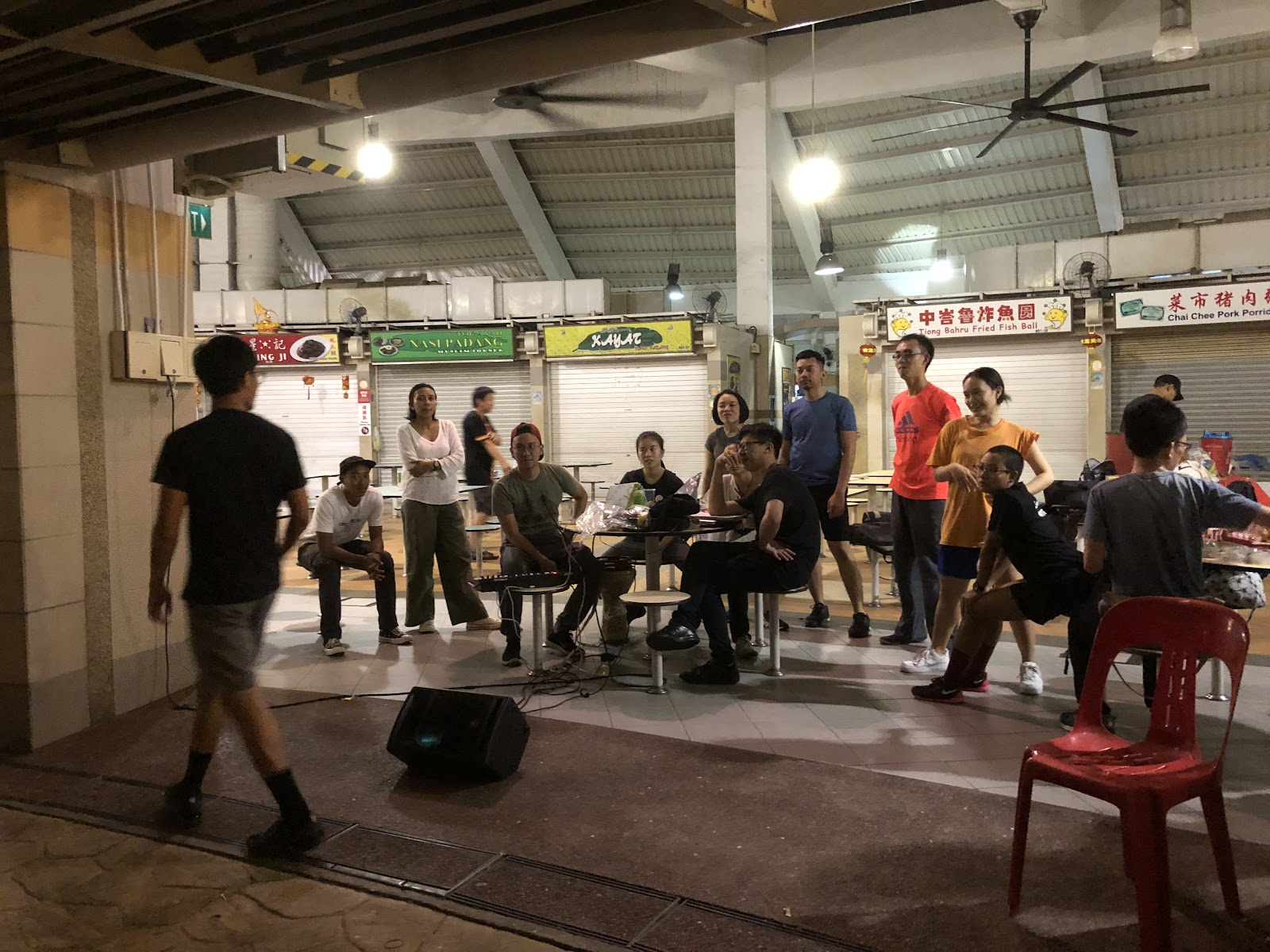 Notes based on the full run.

Daryl then wanted to check on the attendance and punctuality for the next few days so that he could go through the cues with the dancers. He added that fairy lights would be added to the rest of the trolleys the next day.

The dancers were then dismissed except for Sonia, Shangbin, Chloe and Carmen. Sonia was worried for being called/singled out, but it turned out Haizad only wanted to tell her to add on more details on her costume. As for the rest, Haizad wanted to add in an element during Segment 3; Carmen would be carrying a trolley while Shangbin mirrors her while carrying Chloe instead. They practiced this a few times before heading off. 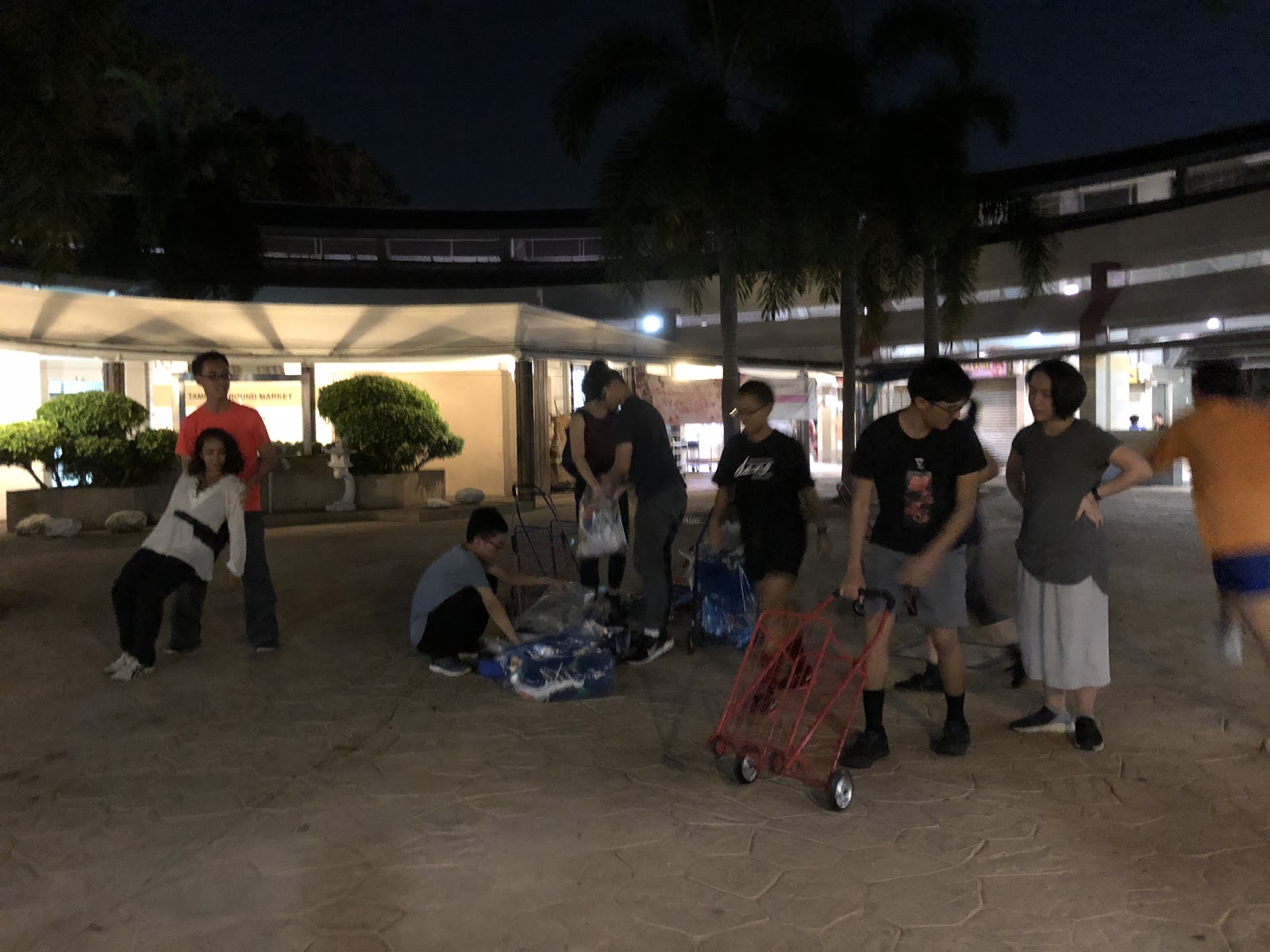 An addition into Segment 3.

As the performers were packing up the props, costumes and their personal belongings, Hasyimah called them over to inform them that she would be making headdresses. She then asked them what kind of headdresses they wanted and that she would be using either egg trays, towels or fluff. Once that was settled, everyone was free to go. 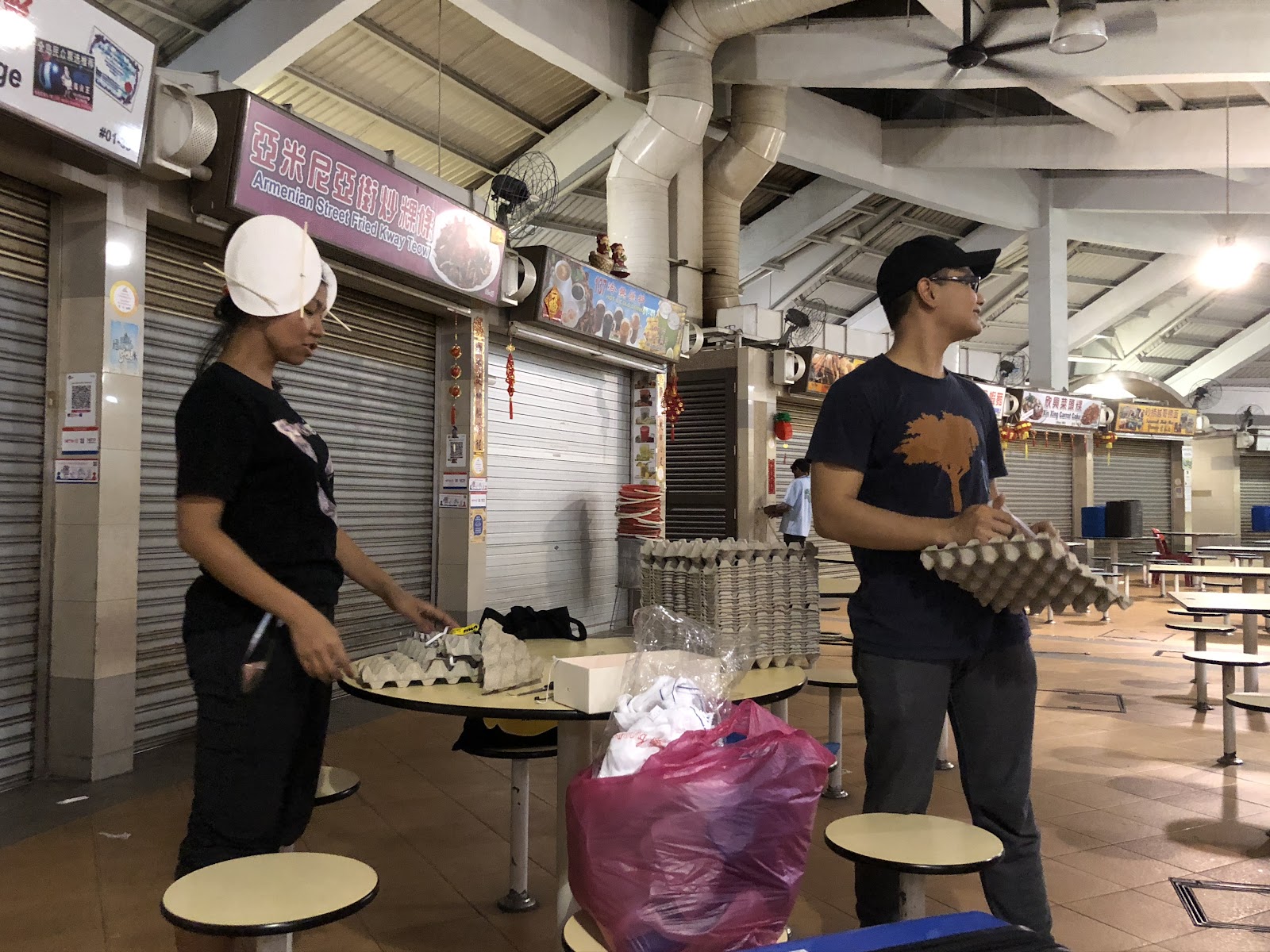 Adding in headdresses as part of their costumes.