Picking up from the previous rehearsal, this rehearsal has more trolleys as some of the dancers were able to borrow from their friends. Aameer also brought a portable speaker so that he could try out the sounds as they rehearse. It was a particularly hot afternoon, and Hasyimah wanted the dancers to acclimatise themselves to the heat, as there is a chance it will be this hot during the actual performances. 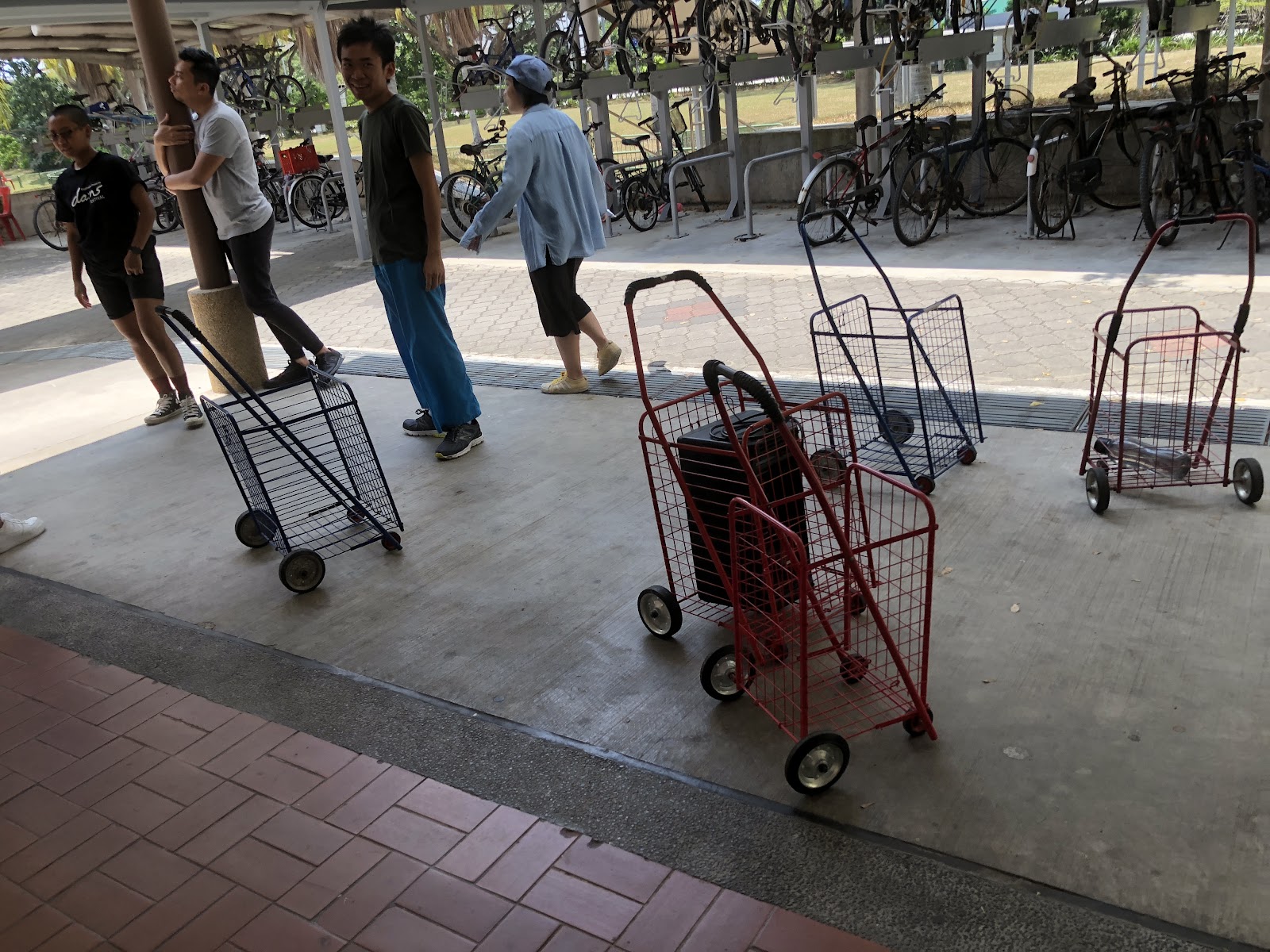 More trolleys for the dancers to try out.

Everyone then went near the bicycle racks to discuss about the second segment, as it was more conducive and sheltered. Haizad shared that there will now be a short choreography during Ji Ba Ban, as they “announced” the TOTO winners. It will then be followed by an old, popular Malay song, Oh Fatimah.

During the discussion, Hasyimah, along with 3 youth participants in the Social Mixing, went to a nearby hardware shop to gather more materials and begin making the costumes. They then headed somewhere near the dancers and started work. 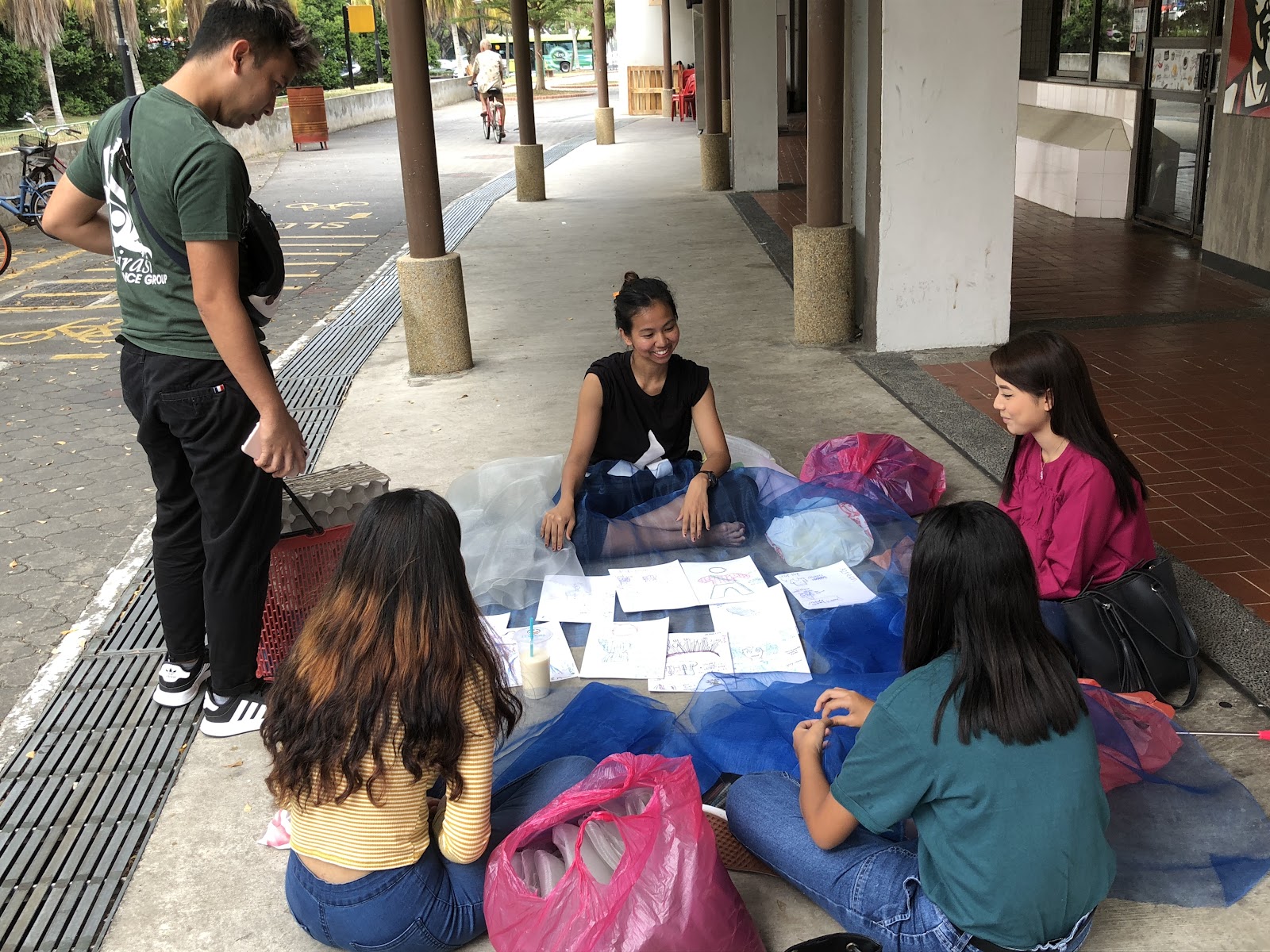 With reference to the designs made previously, the Social Mixing Group started making the costumes. 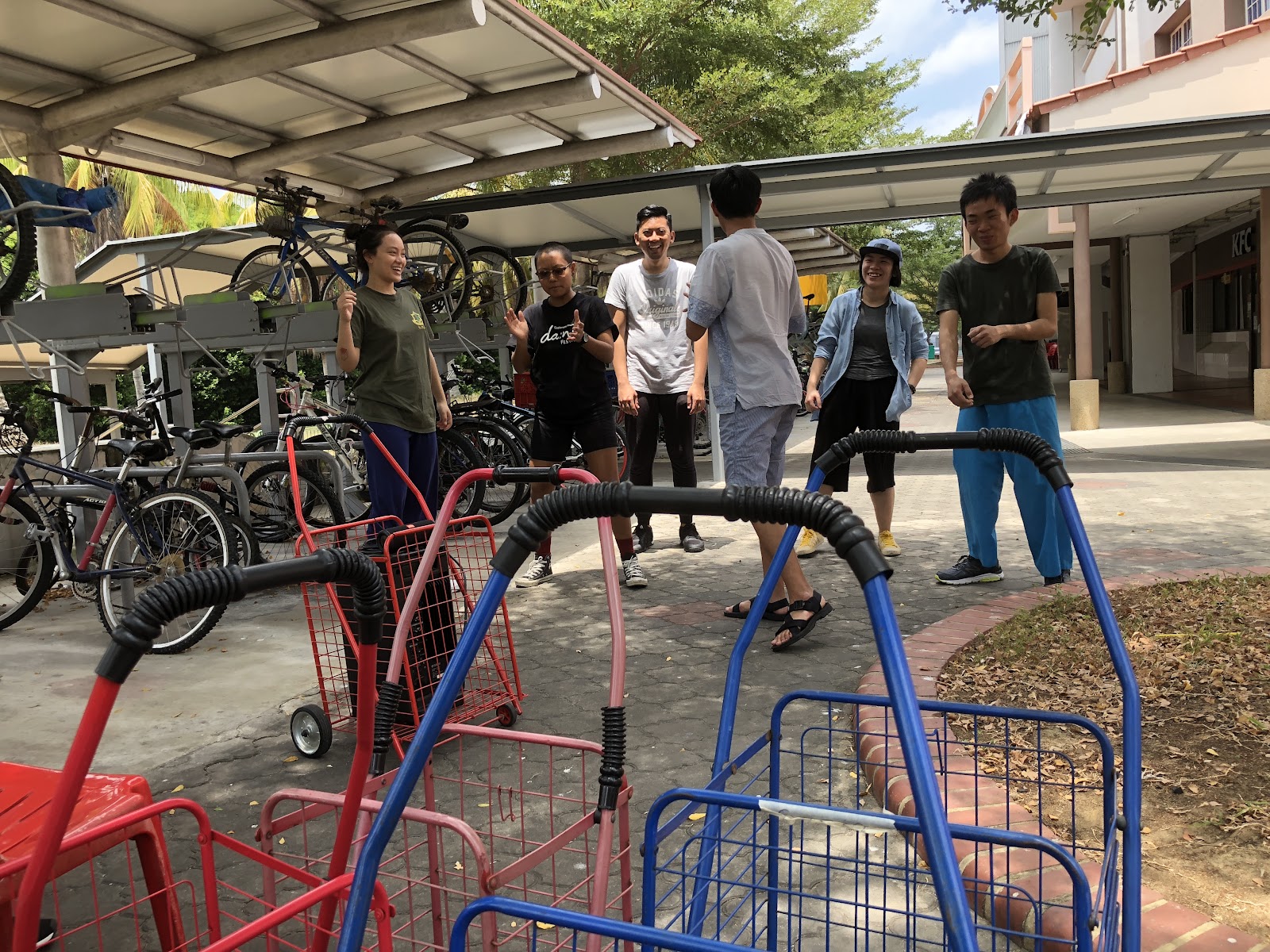 The dancers were learning and practicing a new 6-8s of choreography publicly.

Passers-by were very curious as to what was happening as they saw people dancing in one side and another group cutting and making costumes on the floor. It would be safe to assume that it was an unusual sight and a random encounter on a Saturday afternoon. 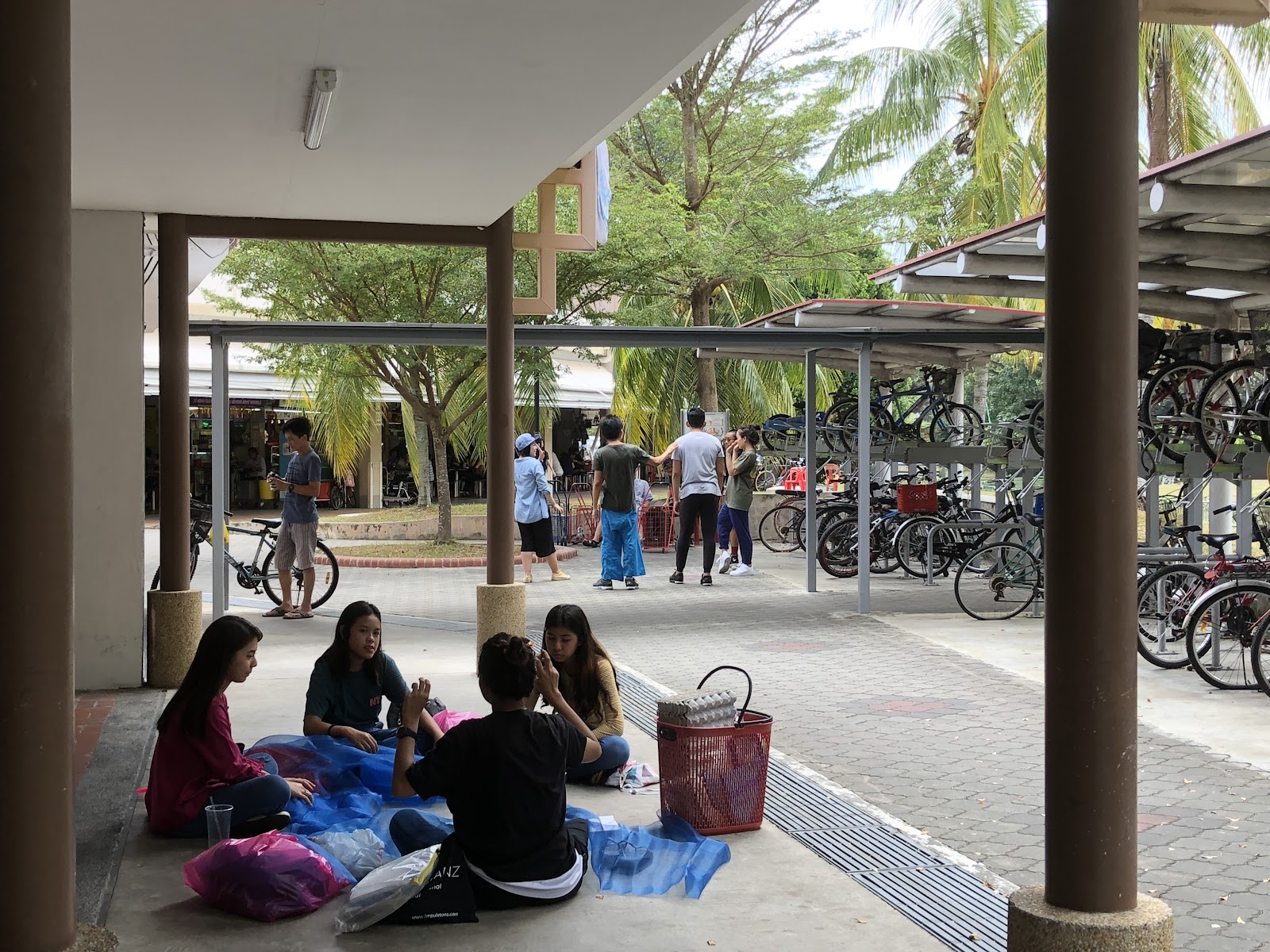 How would you react to this sight?

After going through the choreography and roughly grasping it, the dancers decided to go for an “air-con break” in KFC to cool off. While they were inside, Azreen arrived as she had a prior engagement. Haizad then updated her about the developments so far, and added that she would also be required to learn the choreography together with Rizman. 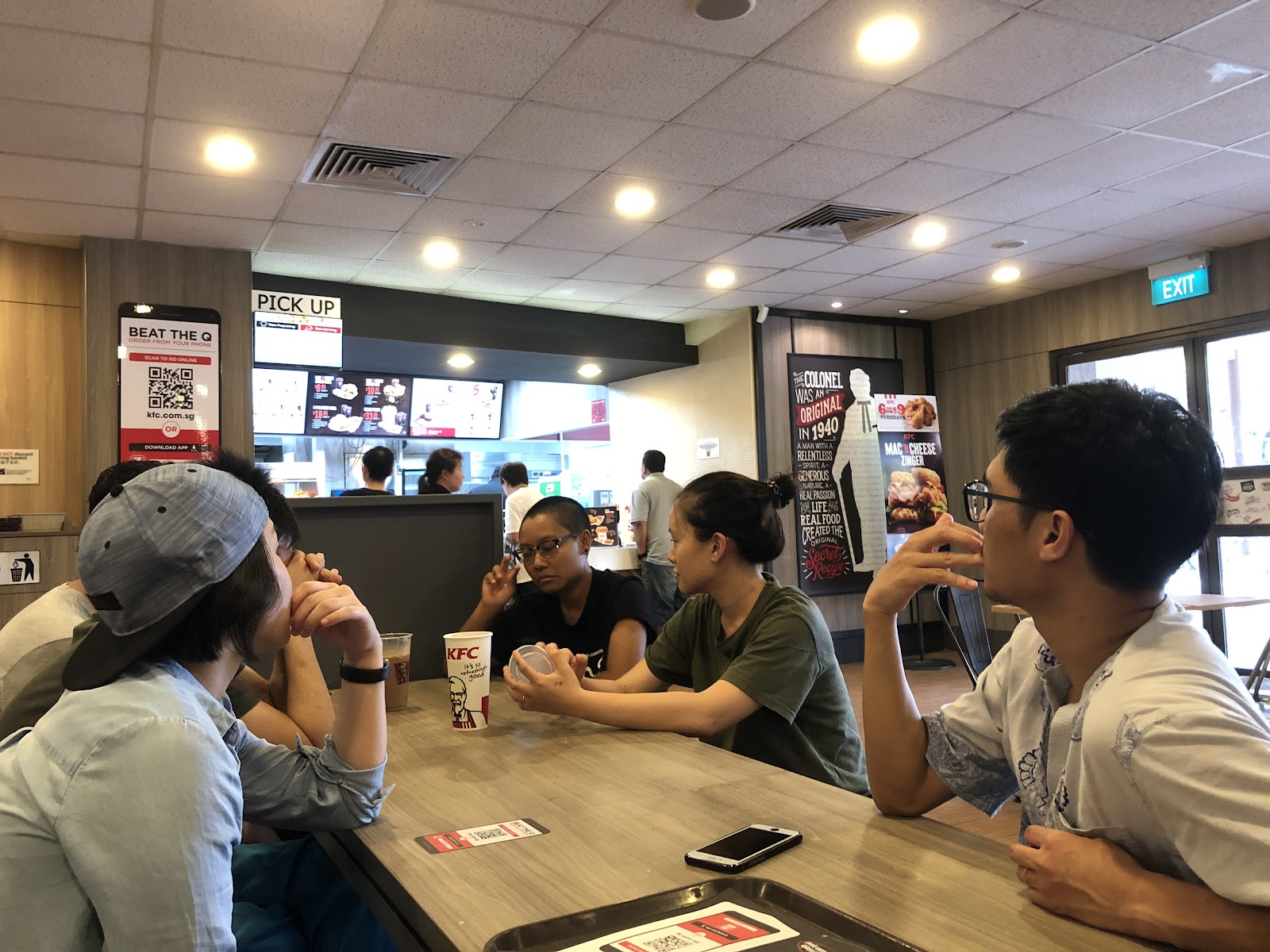 Haizad then wanted to rehearse the third segment in the middle of TRMFC, to try out the trolleys, the audience as well as the heat. 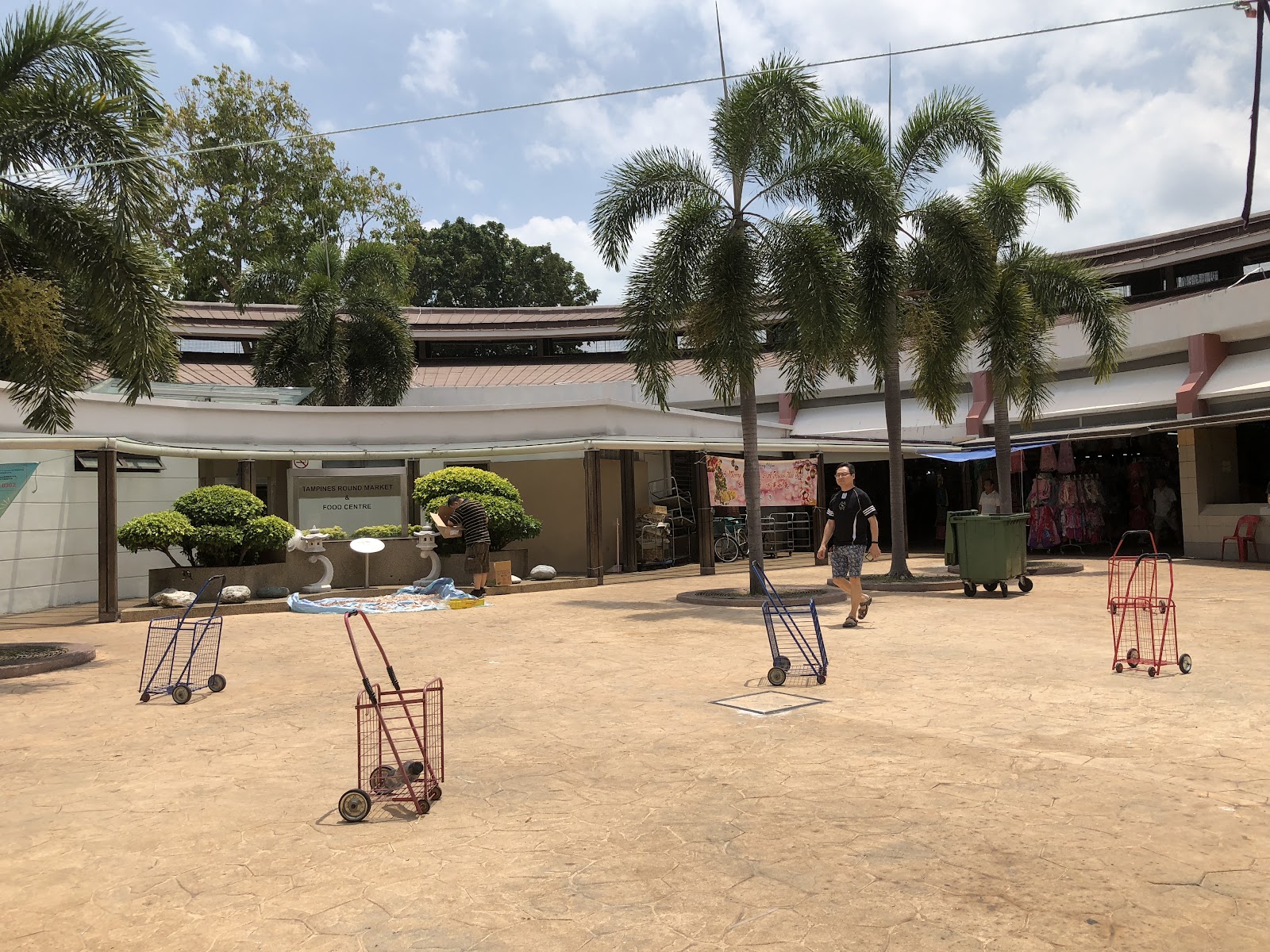 “What if people suddenly went up and said, “Oh look, free trolleys!”?” 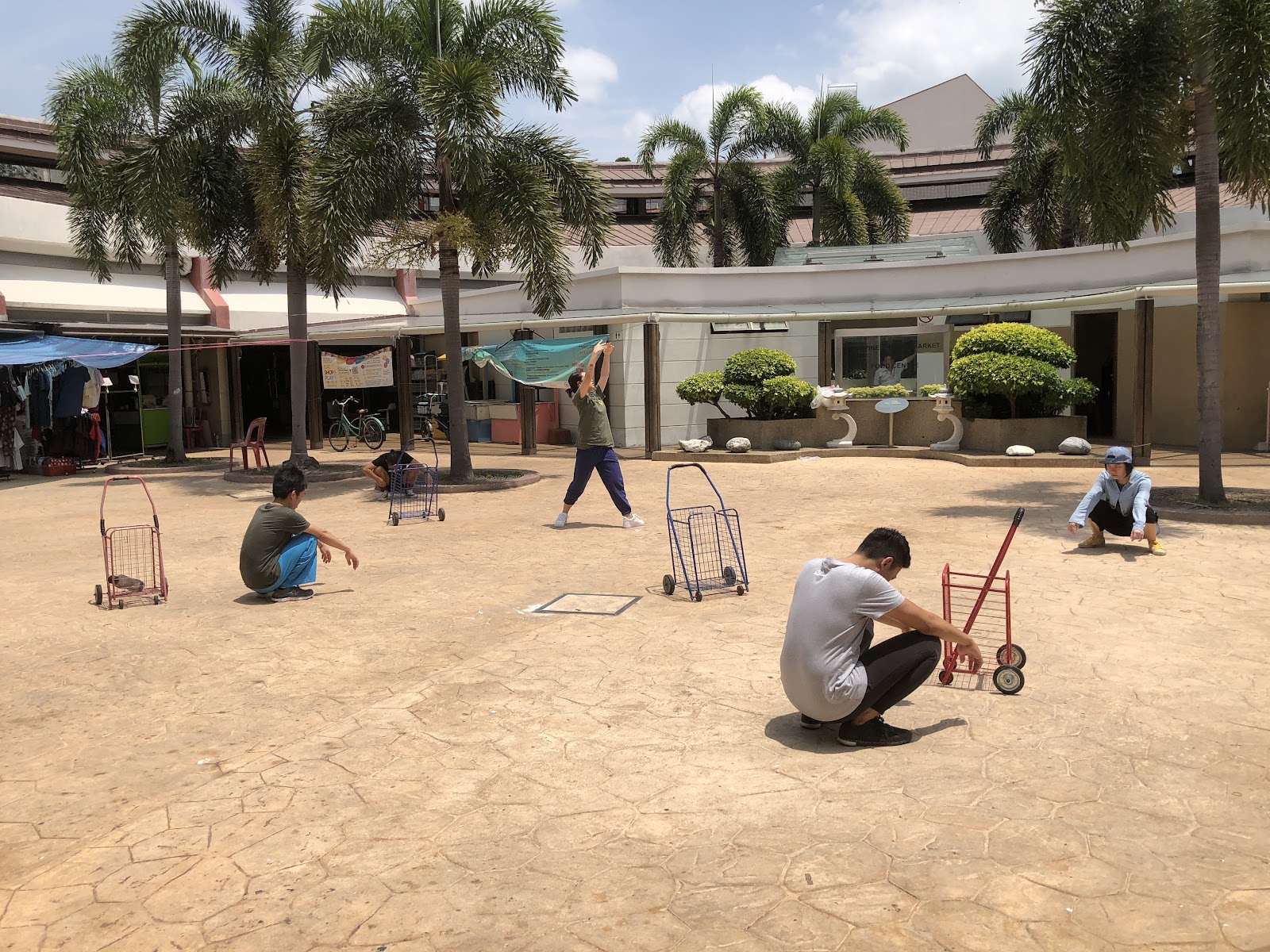 The sun was the best lighting for this stage. 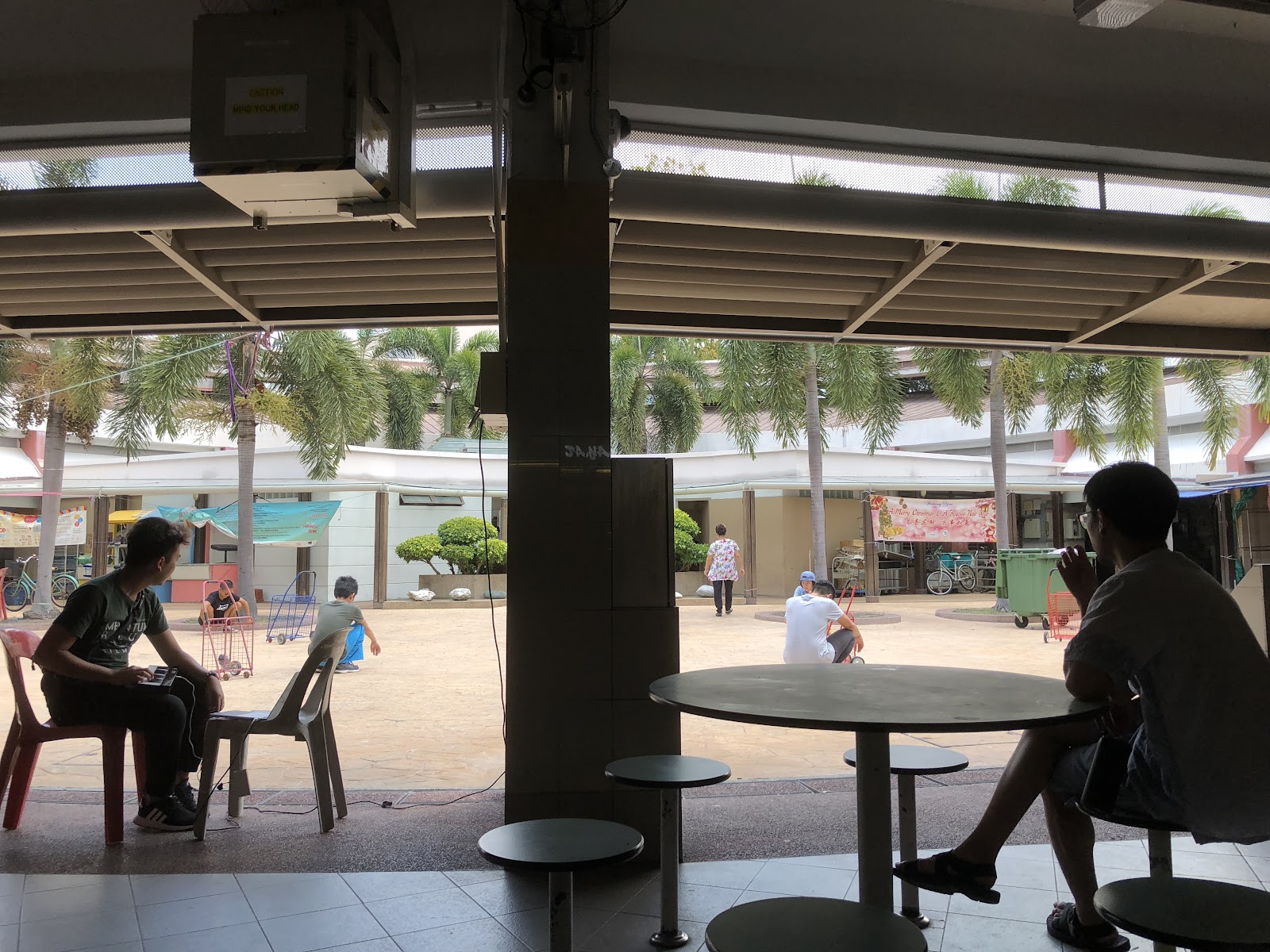 It was their first time rehearsing in the heat, and first time performing with the sounds from Aameer.

As they were rehearsing, many residents turned to watch the dancers. Furthermore, Aameer was providing the sounds and it already felt like an actual performance. Even the hawkers were seen standing outside their stalls to watch what was happening. Despite this, there were still some residents who cut through the middle segment to get to the toilets. It could be that they were oblivious to what was happening, they were nonchalant or they were simply used to the dancers rehearsing in the space. 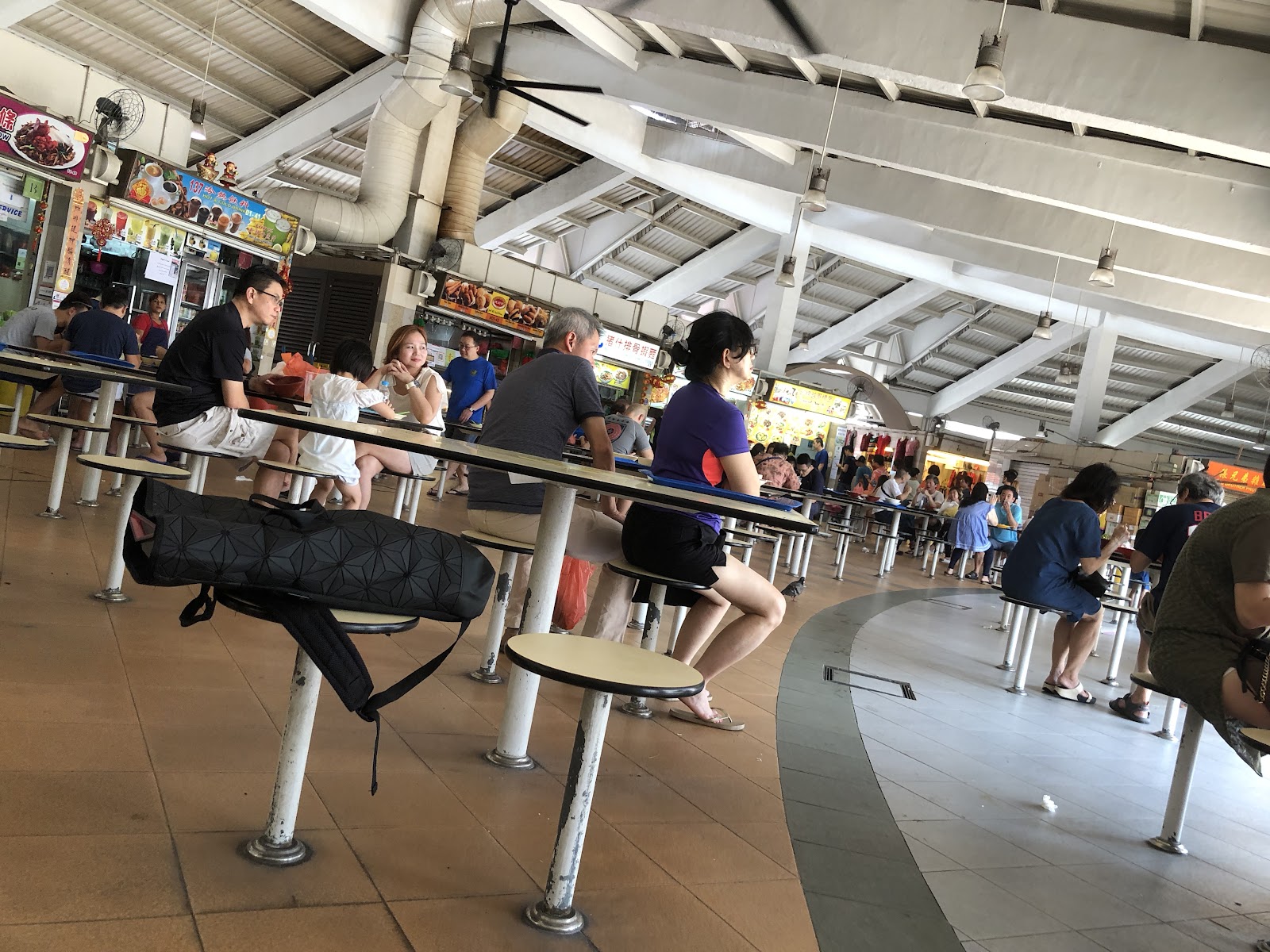 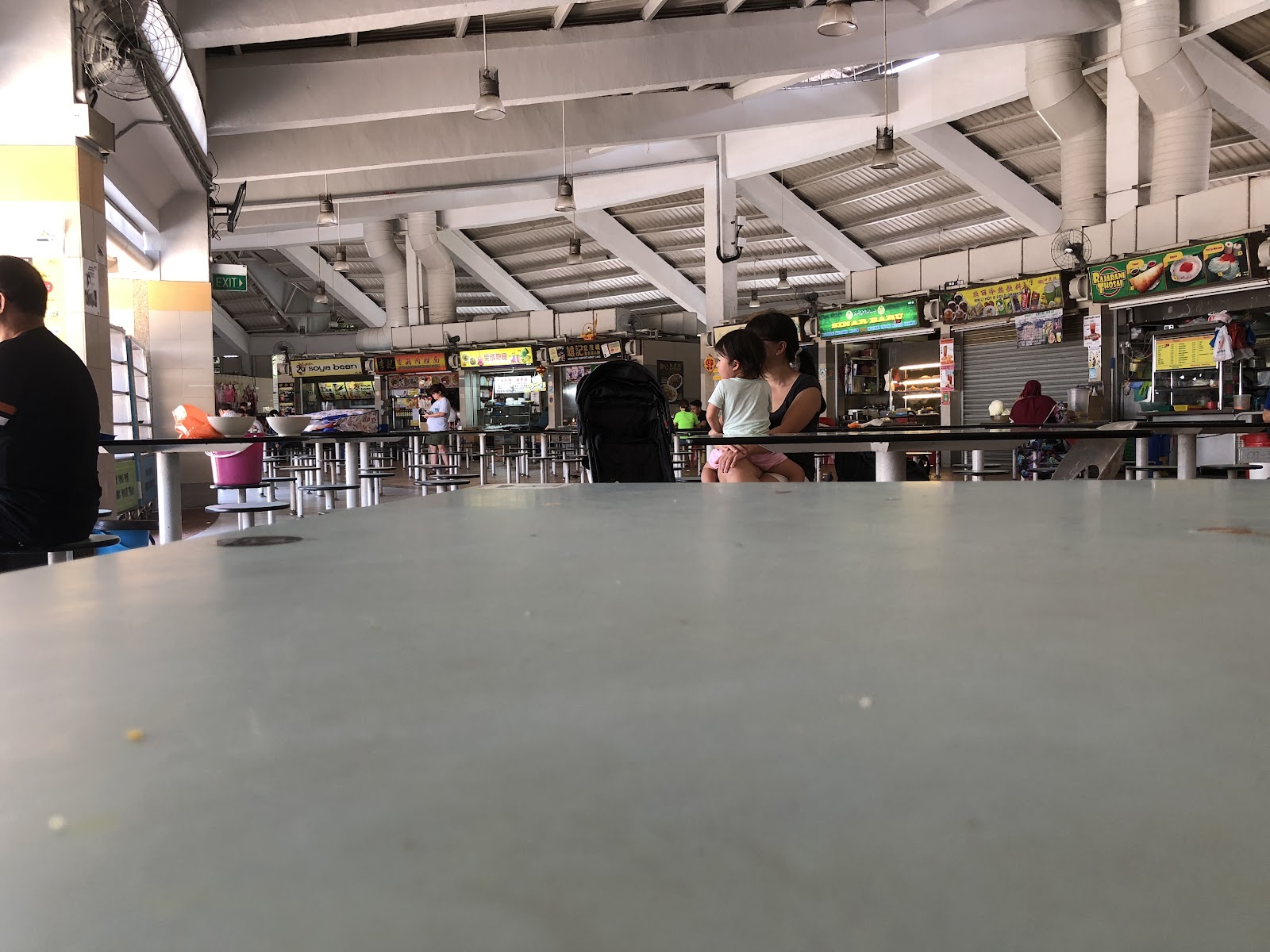 The rehearsal drew the attention of the residents, who watched the dancers as they enjoyed their meals.

After the run, everyone regrouped where the Social Mixing group was making the costumes to help pack up and have their debrief. The concern was that the dancers had to squint their eyes in the bright sun and Haizad could tell that they were moving through the segment quickly to get out of the heat sooner. It was their first time performing the almost full segment in the heat and it will only get more challenging from there as they will eventually rehearse from the very start. 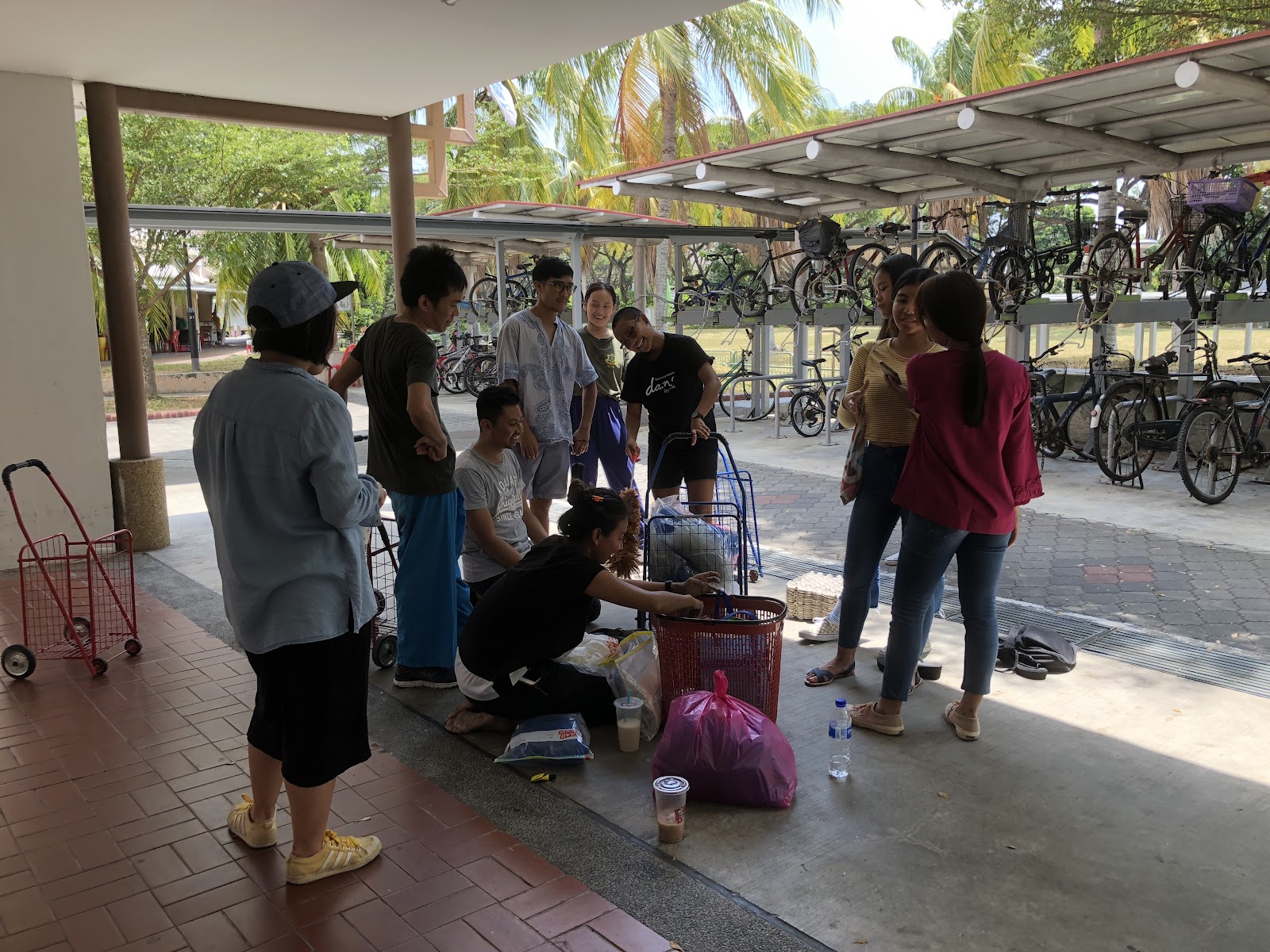 The end of a very hot rehearsal.