IMG_7057a was not present during this rehearsal as she had an interview with Susan Ng on 93.8 FM. The photographer and videographer also attended the rehearsal to better understand and plan out how they would best record down the performances. Additionally, 3 guests from NAC came down to witness the rehearsal and the full run.

Preparing for the final rehearsal before the tech run and performances.

Haizad first gathered the dancers to clarify the ending, about them taking off the costumes. He also wanted to clarify and try out the transition from Segment 1 to Segment 2, how the percussionists will “call” the dancers. From there, he wanted to try out Segment 2, for the dancers to be more enthusiastic and energetic during the lucky draw segment, leading into Ji Ba Ban and finally the percussionist “battle” which will then flow into Segment 3. 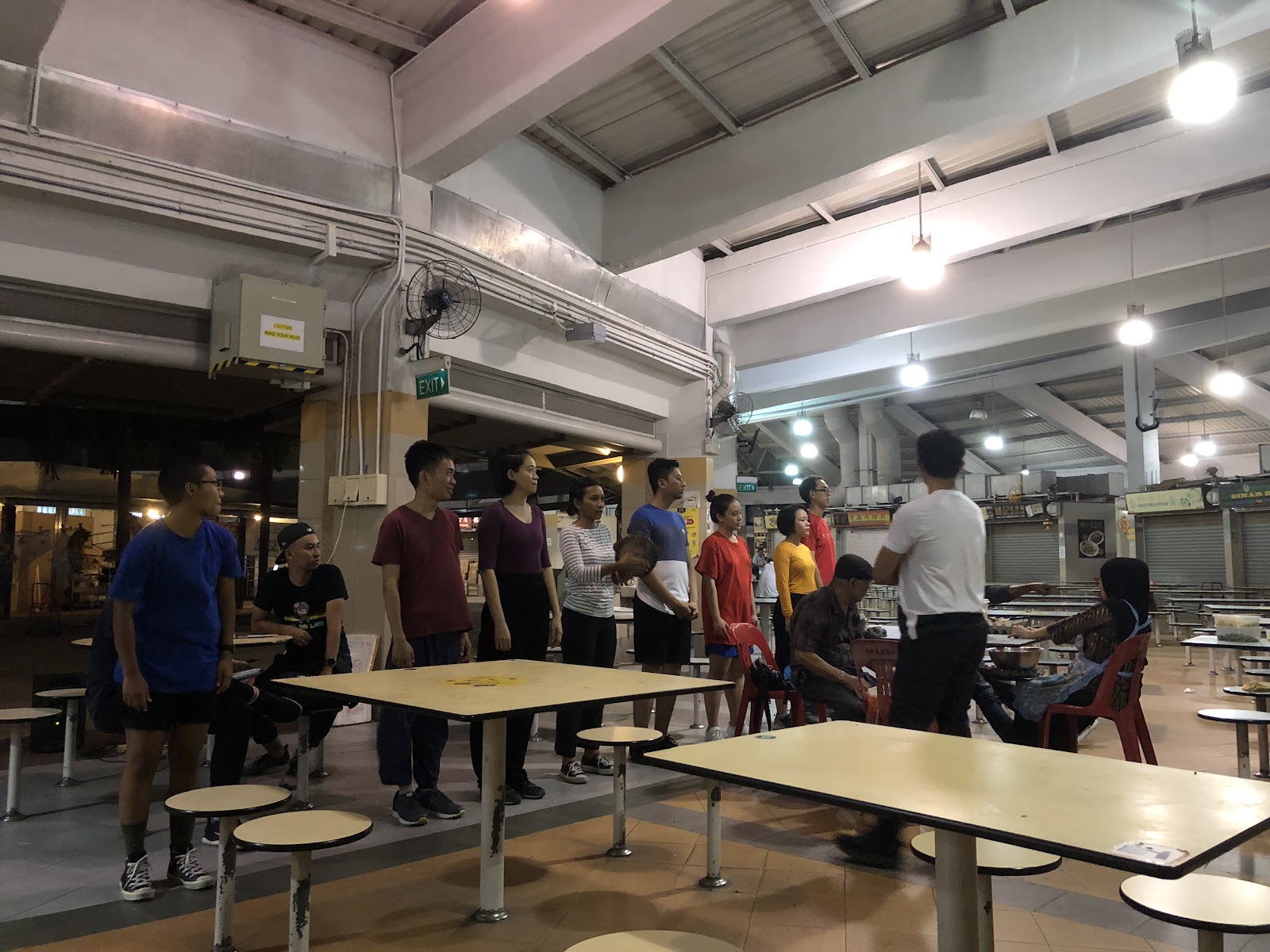 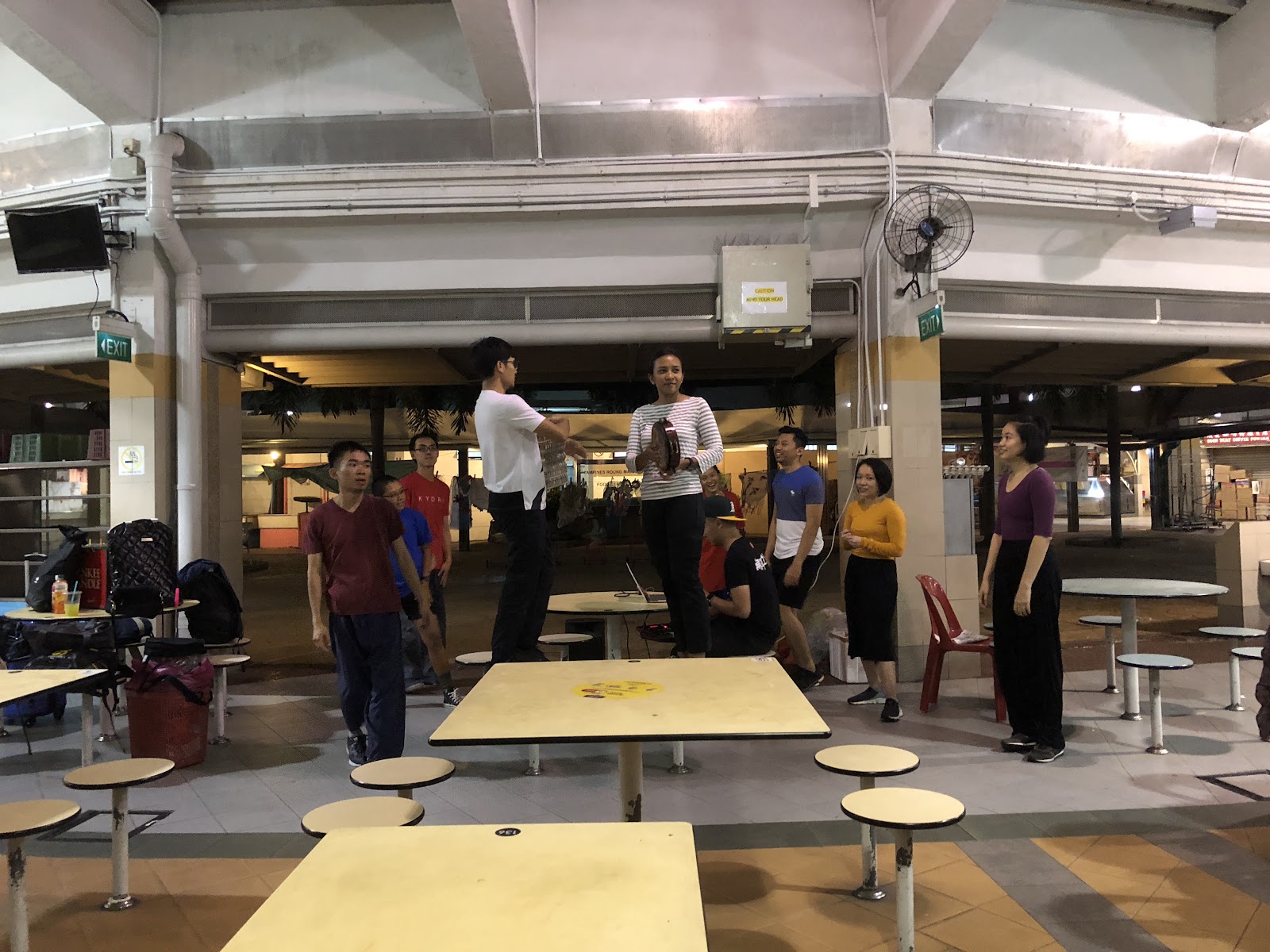 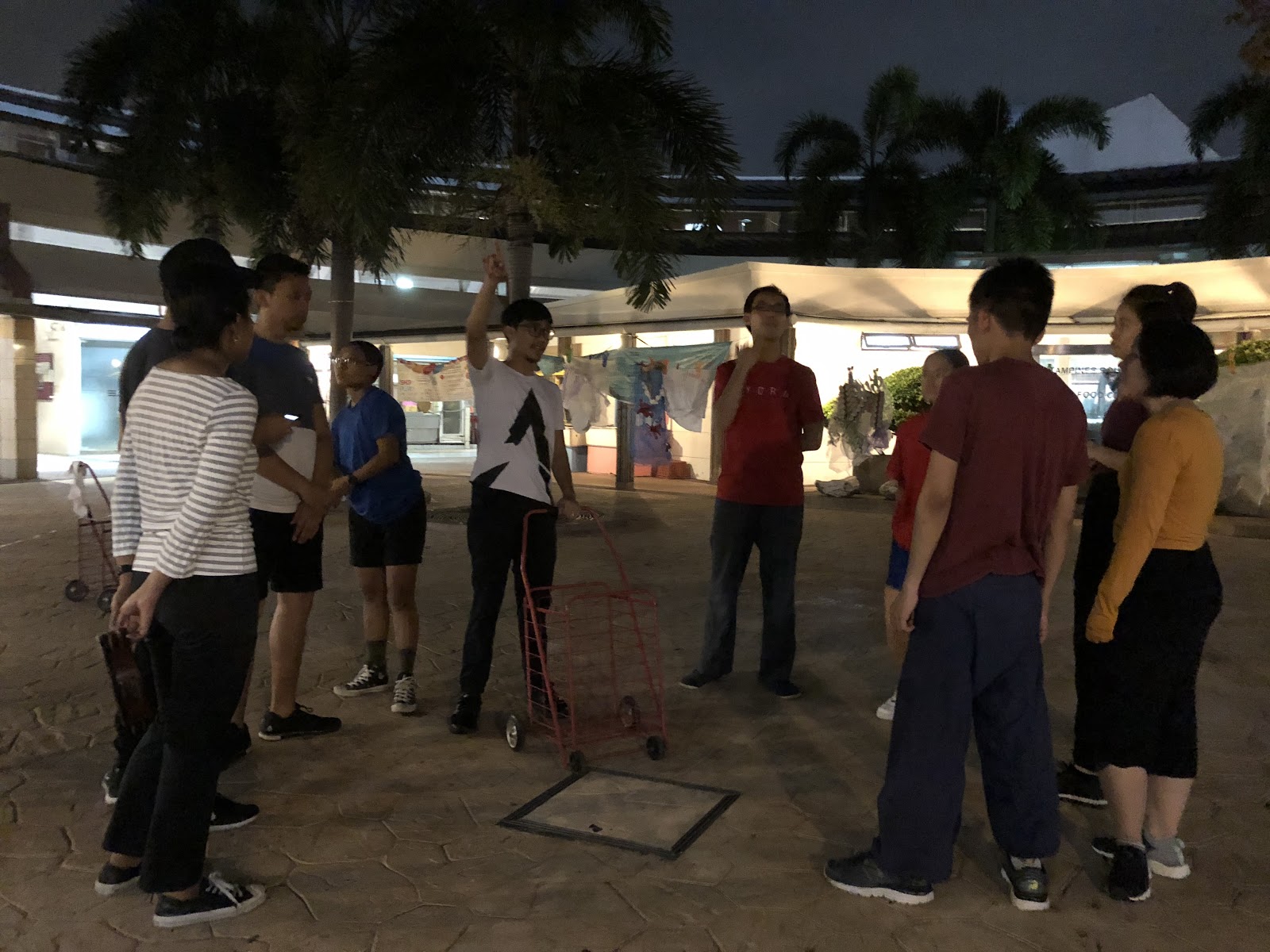 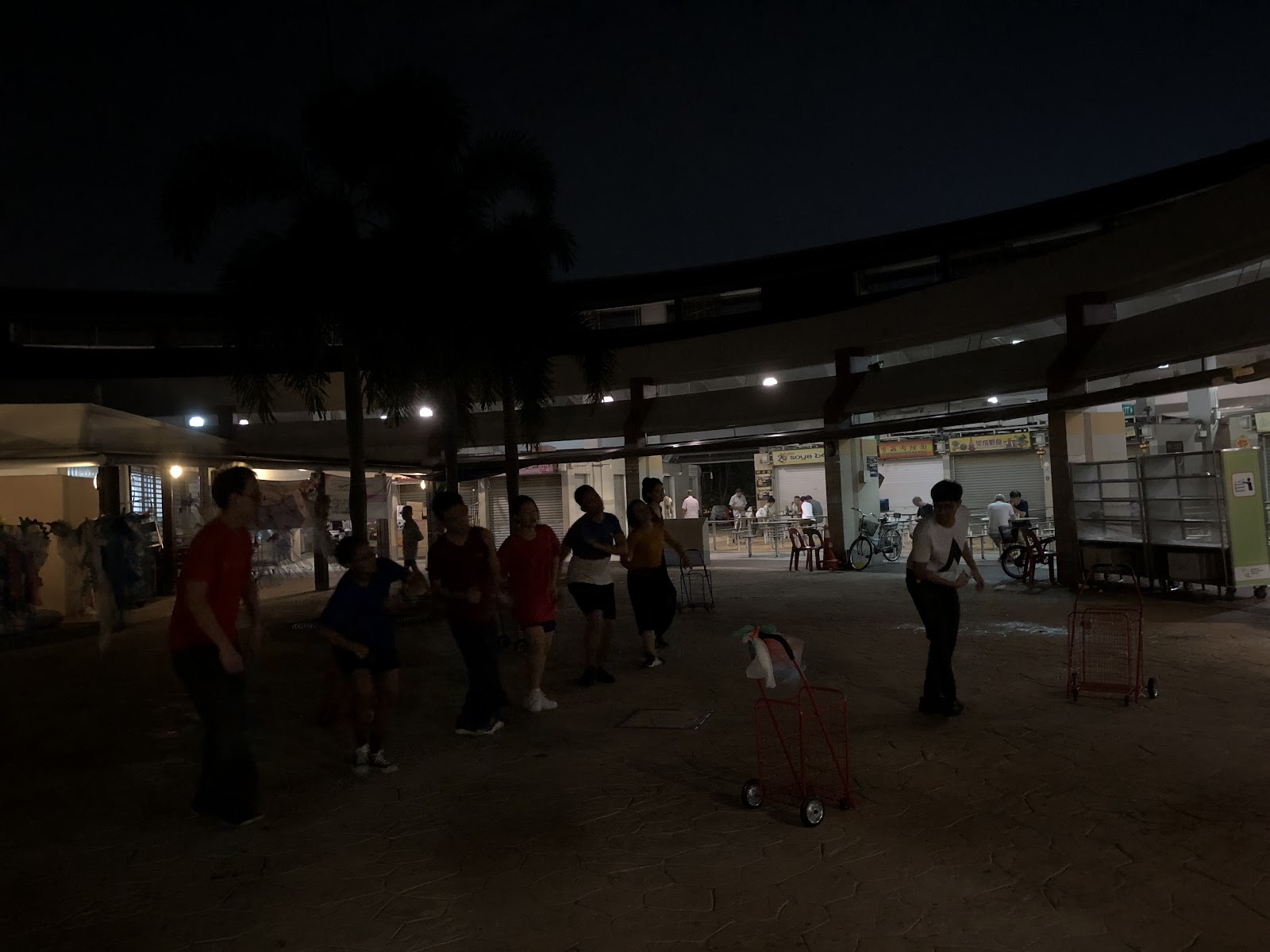 Firming down details of the performance.

After clarifying the various details in the performance, the dancers practiced the choreography for Ji Ba Ban while waiting for the NAC guests to arrive. Once everyone was ready, the dancers prepared themselves at the holding area (Haizad calls it “Avengers”) and the full dress rehearsal was conducted. 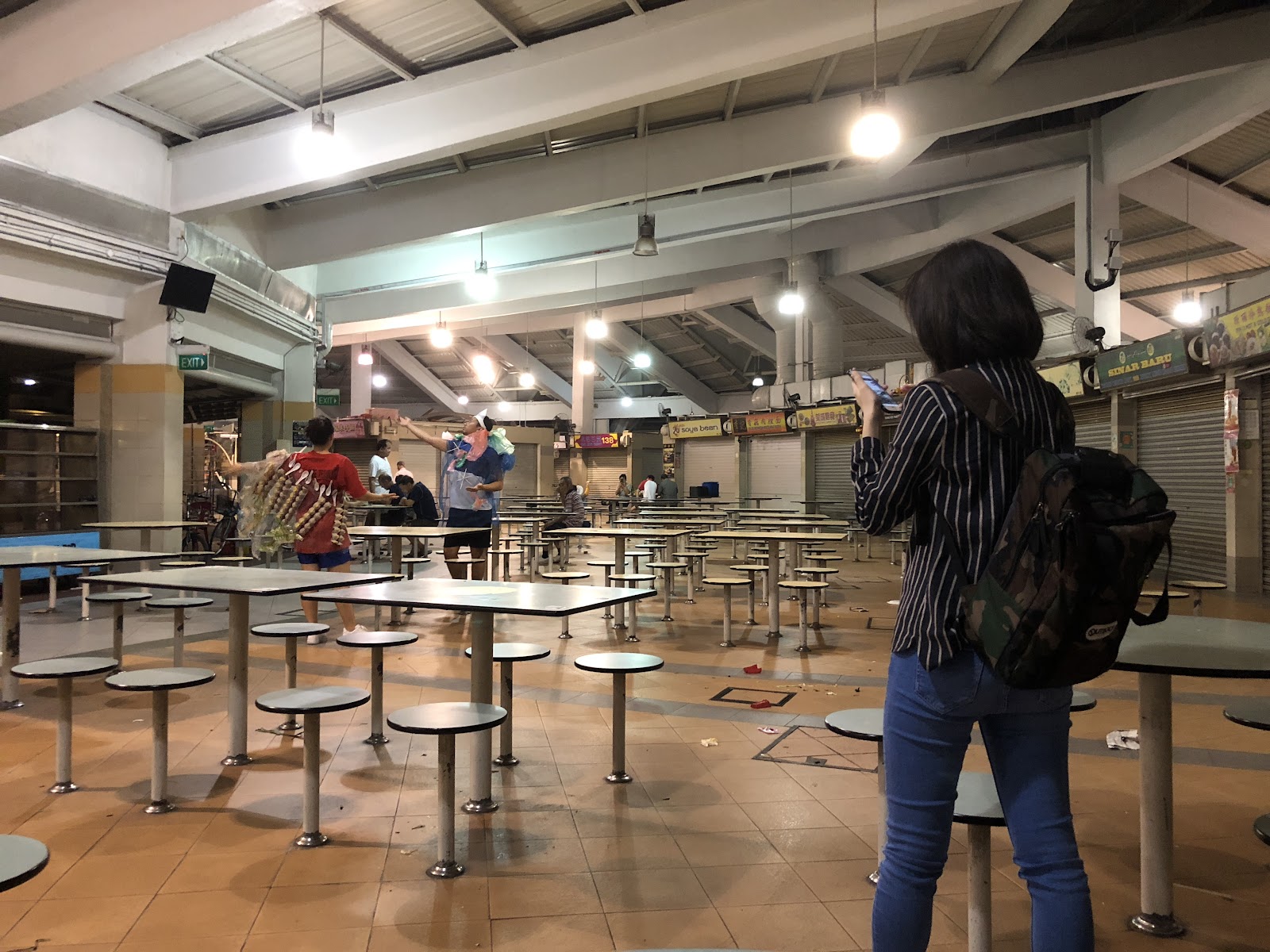 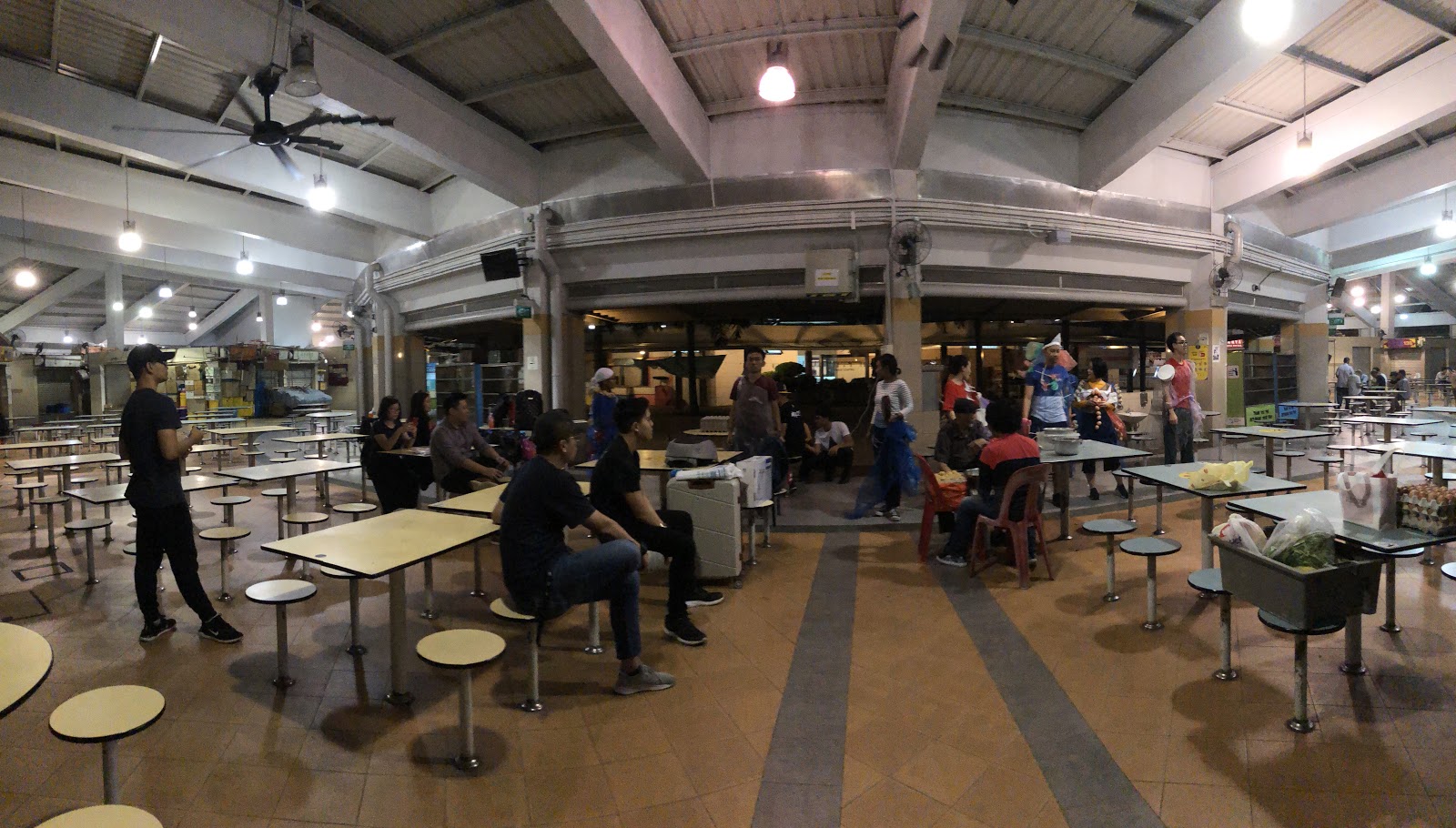 3 guests from NAC and the media team were present to (p)review the performance.

The choreography now required the dancers to hang their costumes back on the clothesline at the end yet still dispersing with the trolleys. The costumes would continue to be a visual installation that the audience would then be able to take a closer look.

It could be interpreted that the costumes came to life to represent the life/spirit of TRMFC to put up a performance before returning to their original state. Something like “come and go”. This also ties in with P7:1SMA’s philosophy of in-betweenness; the costumes coming alive in the middle of the day, amidst the crowd/residents, before “disappearing” again as represented by the dancers. 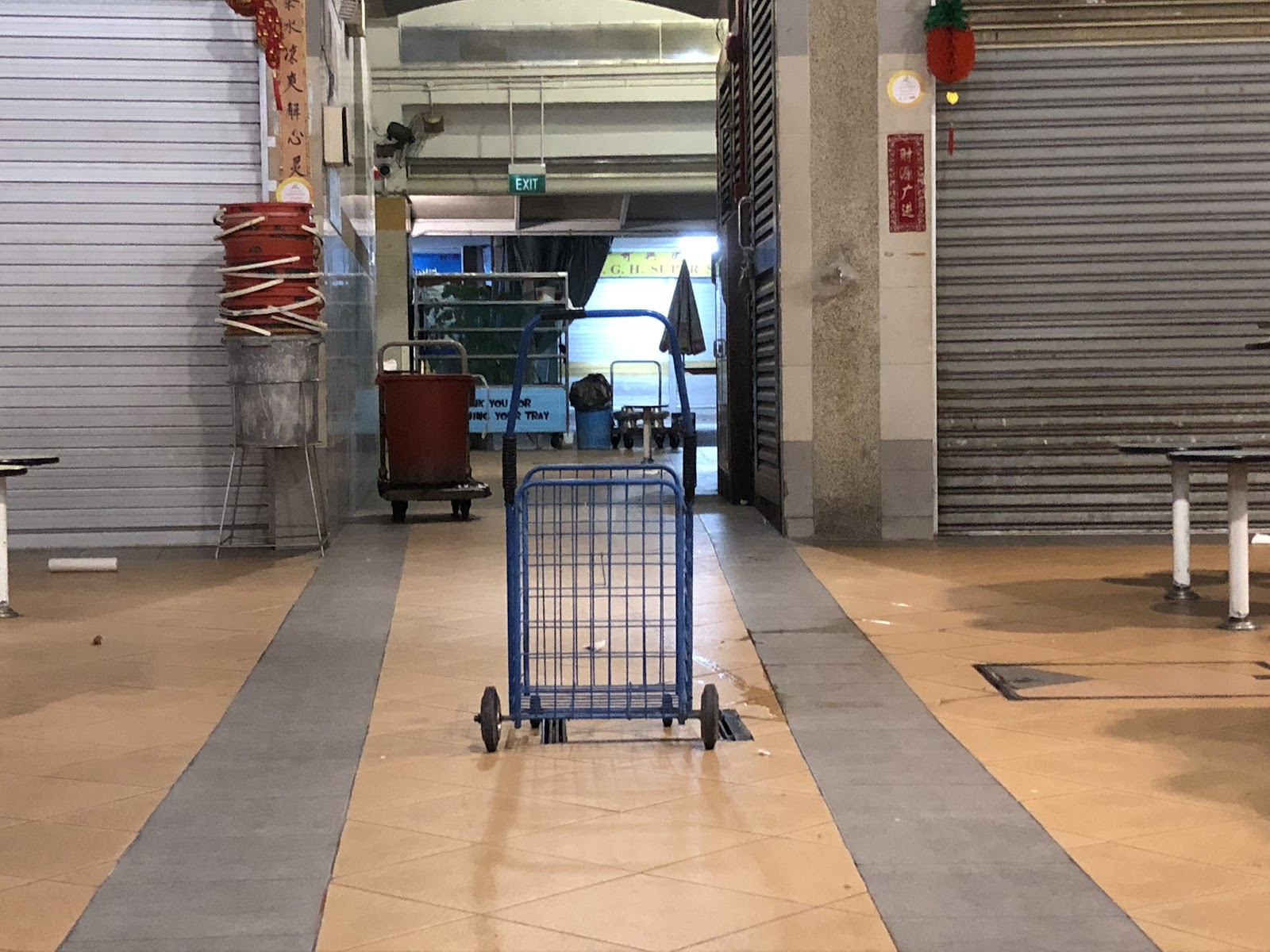 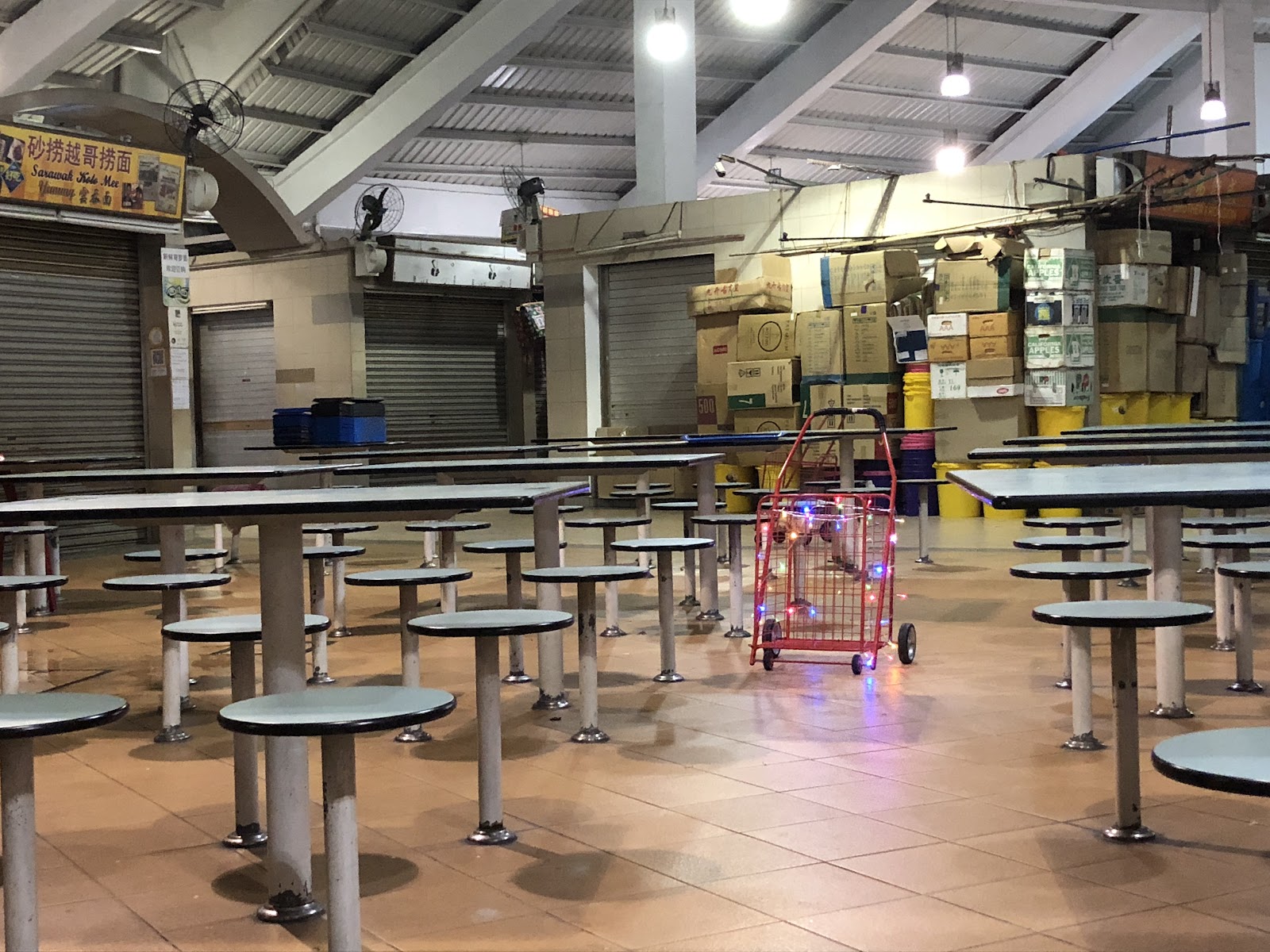 The “abandoned” trolleys marked the end of the performance.

The dancers then proceeded to pack up and head to the van while Haizad was collecting feedback from the guests. 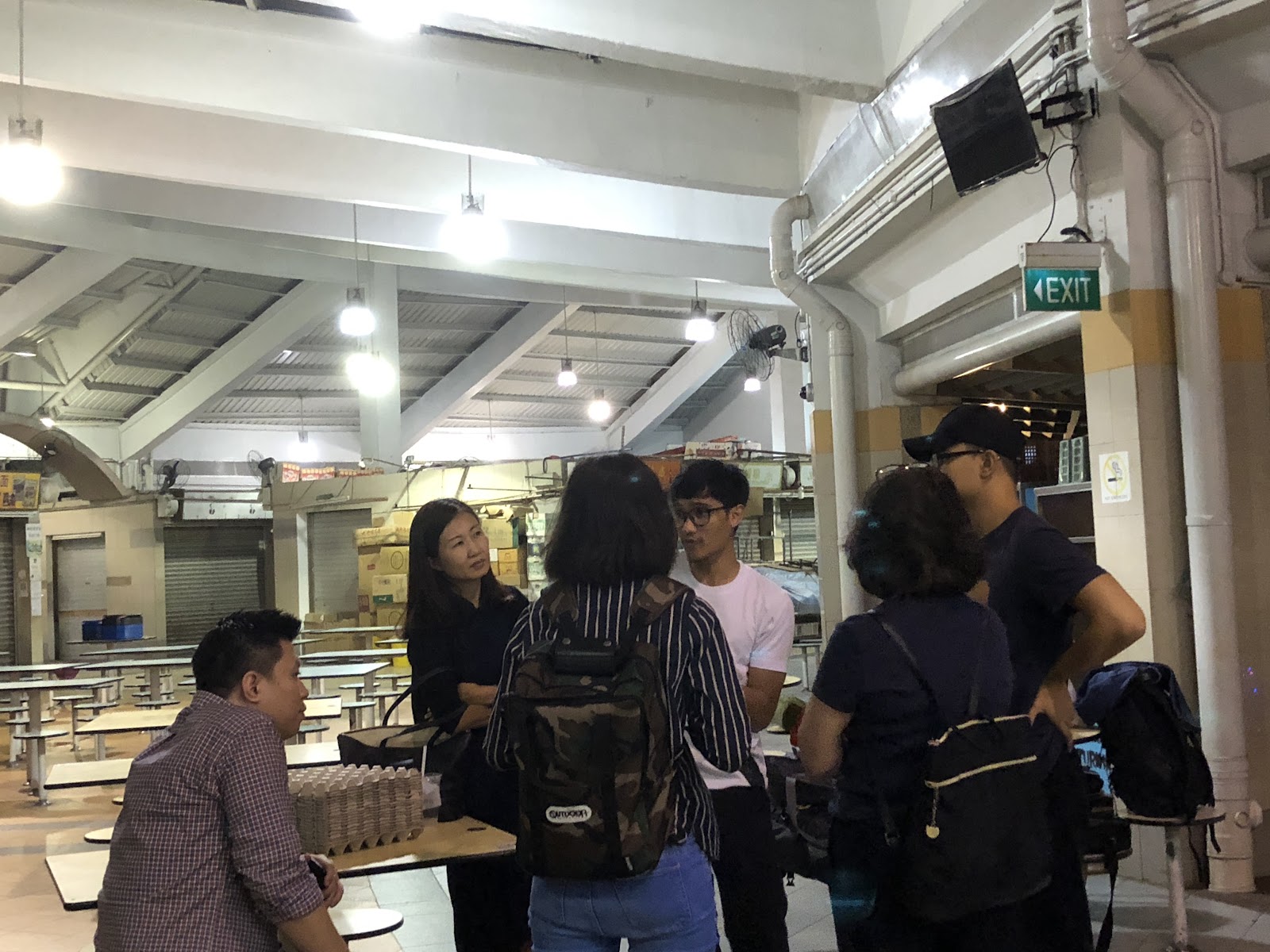 Feedback from the guests.

Haizad then came to the van to debrief the dancers:

The percussion “battle” was menyampah (cringey) and the dancers have to be more hyped and enthusiastic as well as less awkward.

However, Syimah had to tone down

They also have to be open and professional when the audience element comes in during the actual performances.

Some notes for individuals who had “solos”.

Notes for the dancers 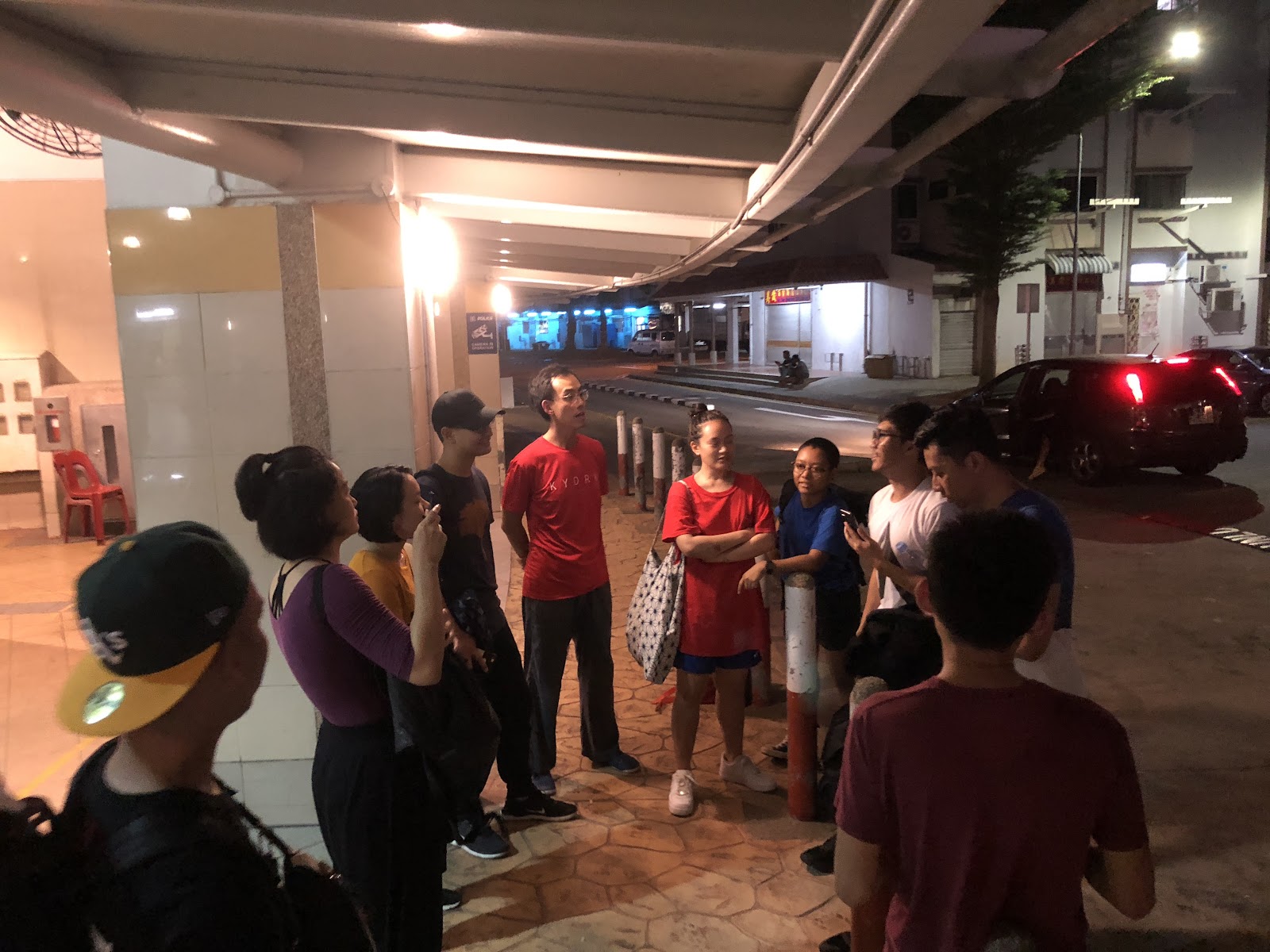 Final debrief for the final rehearsal.