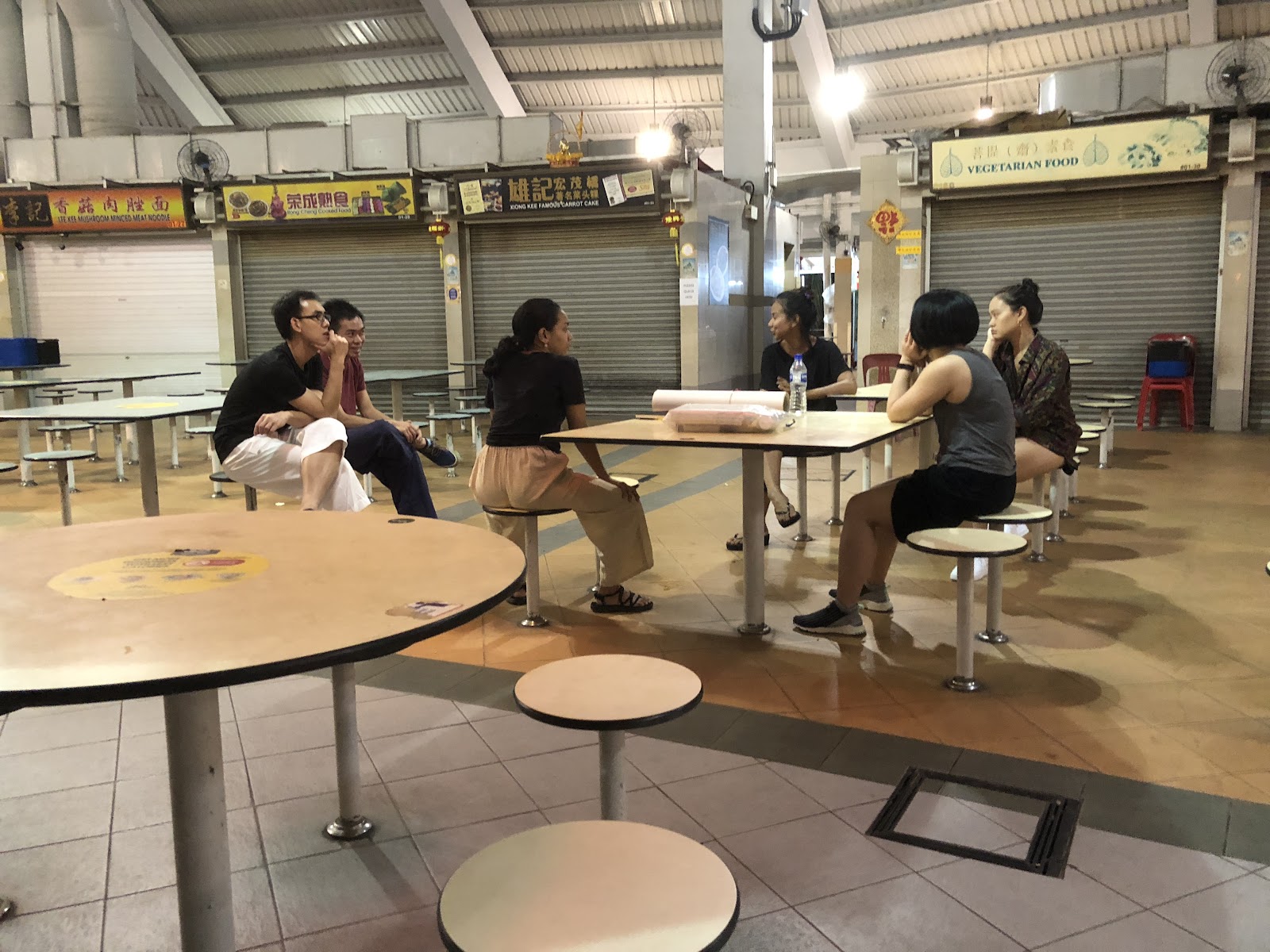 Hasyimah updating the dancers on developments regarding the performance.

The rehearsal started with Hasyimah briefing the dancers about the performance; the confirmed dates at that time, how many shows and other aspects of District 18 that are currently in development. After talking to them, the rehearsal started proper with warm up via a game conducted by Desmond, called Soldier Guards The Castle.

The aim of the game was to walk up to the soldier and tap their shoulder without being seen/caught moving, where the “players” have to freeze when the soldier is looking at them. Whoever is caught will have to return to the starting area and try again. As Desmond was explaining the game, the Daruma video from the Japanese film As The Gods Will came into mind; the rules are similar, but the consequences of being caught are less fatal. 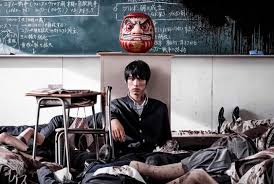 The game was an interesting way for the players to familiarise with the space as the players used the environment to hide and blend in, thinking of different paths to reach the soldier. It helped to discover more ways of moving in and around the space and to be more aware of the surroundings, tables, stalls, people etc. As for the soldier, they had to be alert and keep track of where everyone was so as to not be caught off guard, paying close attention to detail when spotting the players from a distance in an unfamiliar territory.

For the first round, Desmond was the soldier standing near the toilets and the starting area was the perimeter of the center area in TRMFC. Not long after the first round started, Chloe managed to sneak up and tap him, eager to find out what the “prize” for winning was. Desmond told her that her reward for winning was to be the next soldier, and she was allowed to select the play area.

She decided the play area to be at the outer ring of hawker stalls, changing the environment. In addition, there were also residents sitting at the tables, some in big groups. 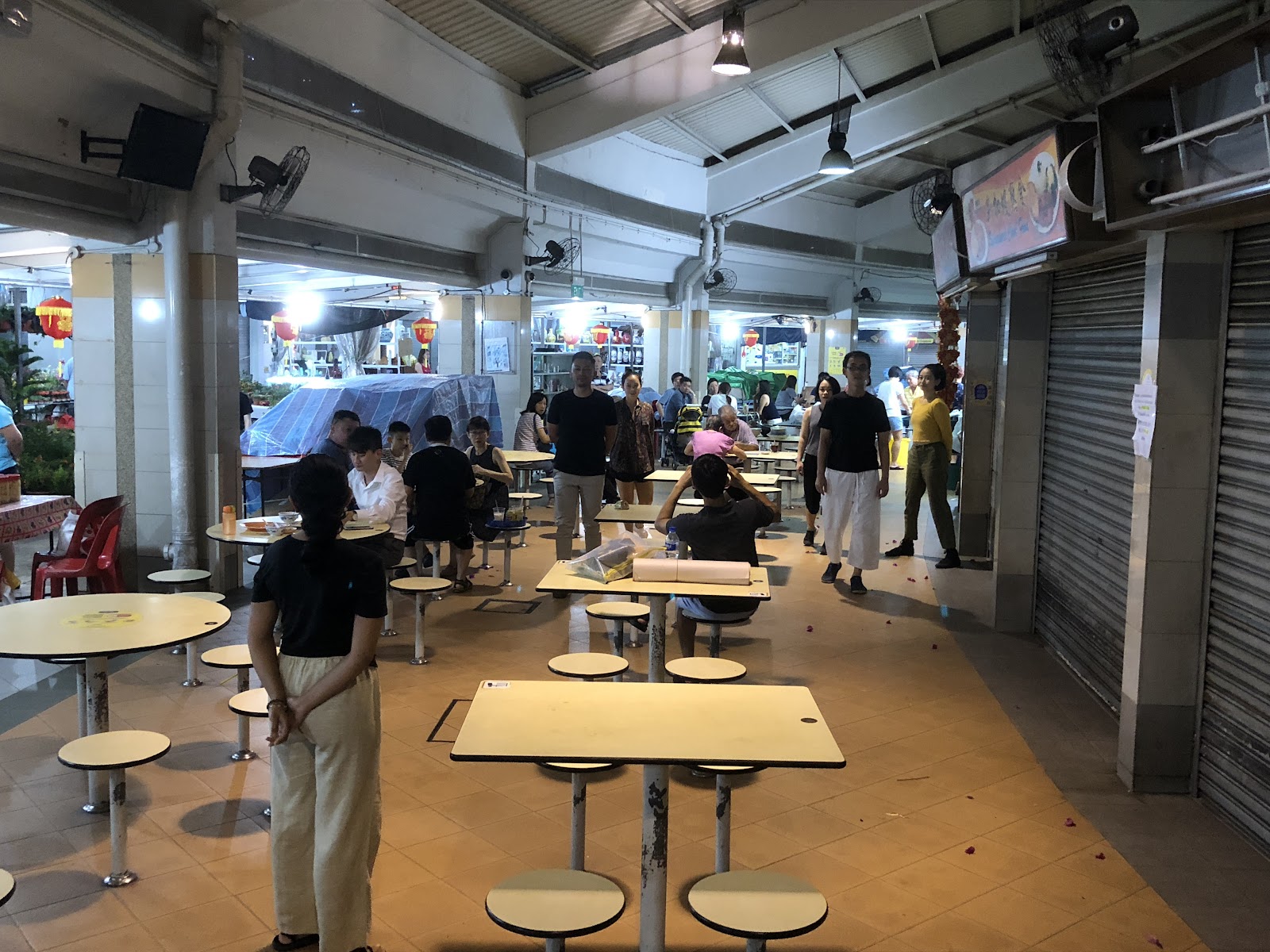 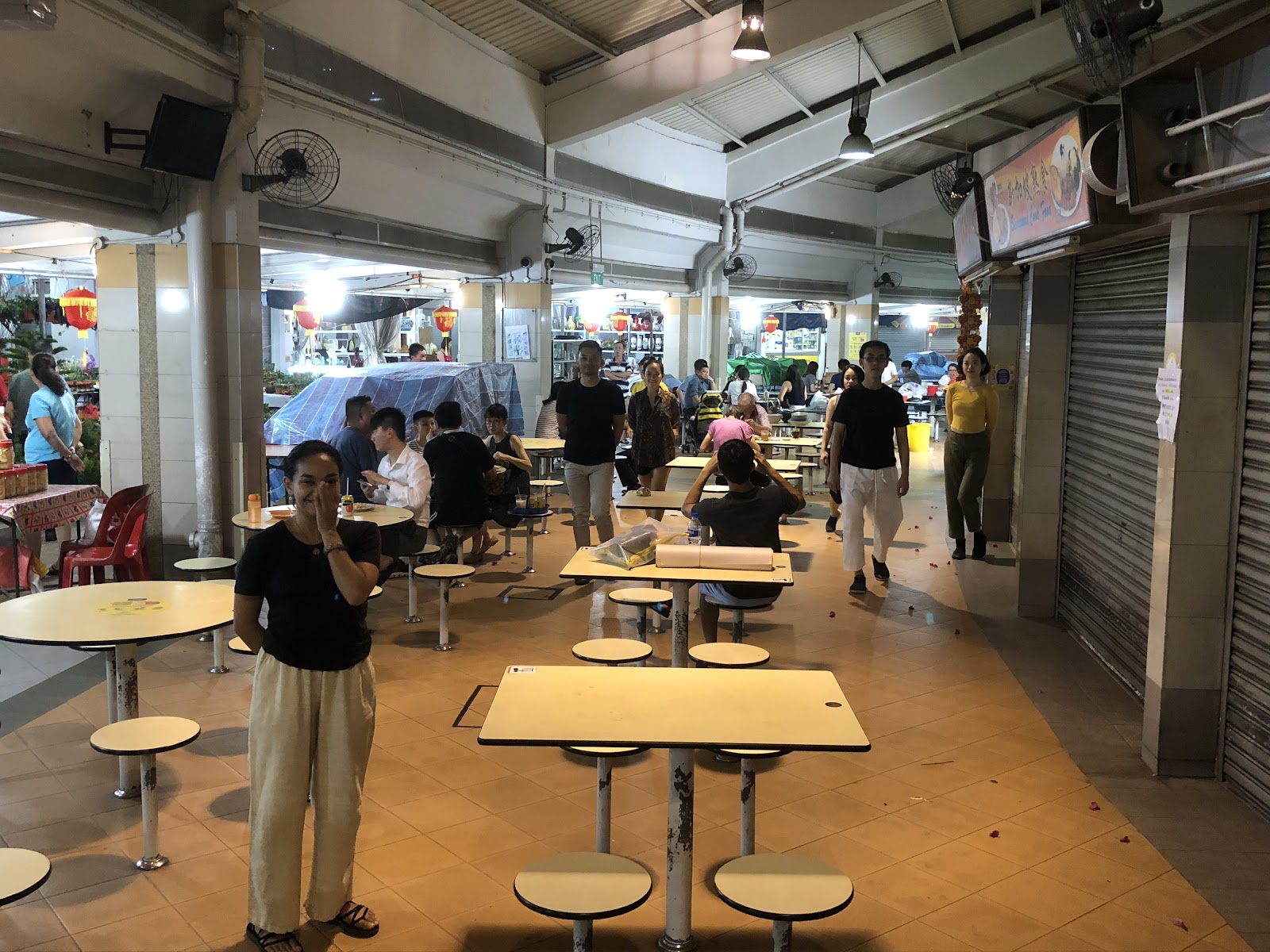 Chloe decided to play the game in an area where some of the residents were sitting. They were inevitably glancing over and spectating the game. Perhaps they are more accustomed to seeing children play games in public spaces compared to those young at heart?

It is interesting to note that Desmond was taking risks by running during each of his attempts to get up to the soldier while everyone was being cautious and walking slowly in order to freeze easily. He also made use of the other players by hiding behind them, weaving through the obstacles (tables, pillars and people). This environment presented a different challenge to the players, in contrast to the open space in the center of TRMFC; it was narrower thus more difficult to escape the soldier’s field of vision, yet it had more hiding spaces and it was up to the players on how they could take advantage of that.

The second round took a little bit longer, and Sonia eventually managed to get up to Chloe and tap her shoulder. Similarly, she took over as the next soldier and the game was brought back to the center of the TRMFC. This time, the starting area was from the stalls and the players had an additional task; as they are sneaking through the hawker center, they must interact with 3 different sets of tables & chairs before reaching the soldier. 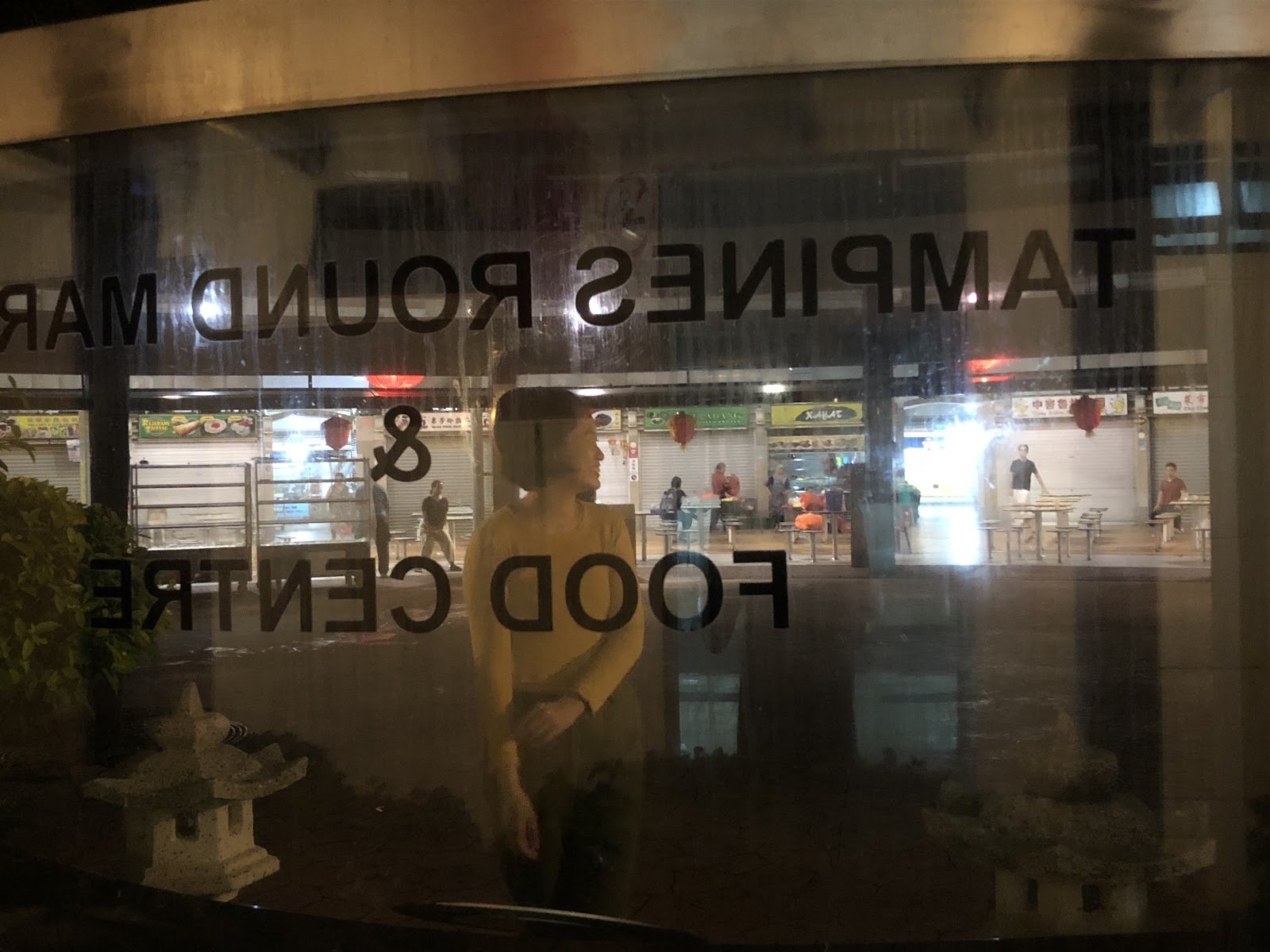 It was more challenging for Sonia to spot the players from afar and she had a larger area to keep a lookout for.

These changes to the game had the players coming up with different ways of approaching the soldiers. Some sat on the chairs while others crawled on the floor of the hawker center. They hid behind the tray return areas and the pillars at the side to better sneak around. 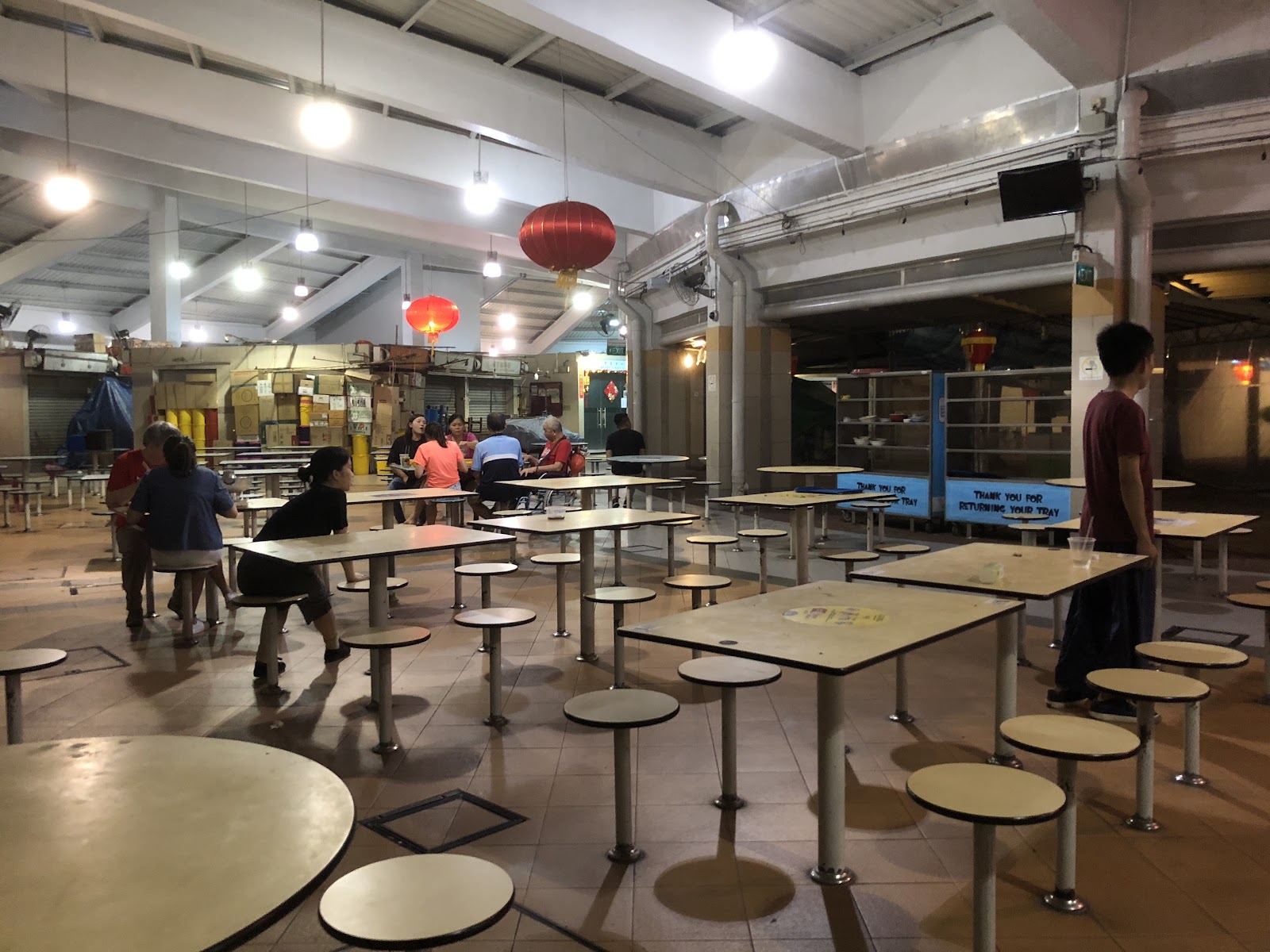 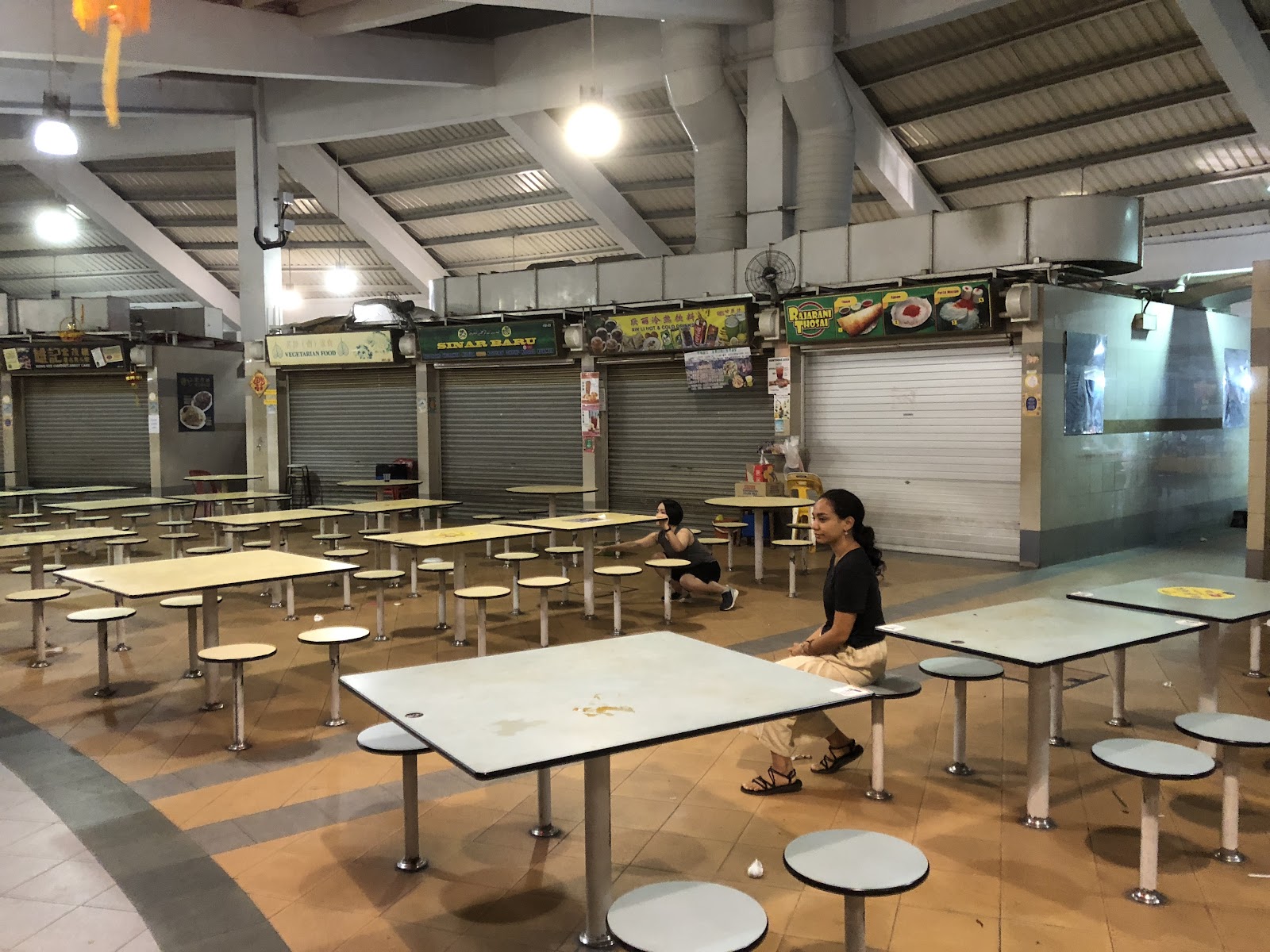 Different ways of sneaking around.

Due to the larger playing area and starting further from the soldier, it was more challenging for the players to discern if the soldier was facing them or away from them due to the silhouette effect. Risks were taken to sneak around and the players took cues from each other; they will freeze if the players around them freeze. 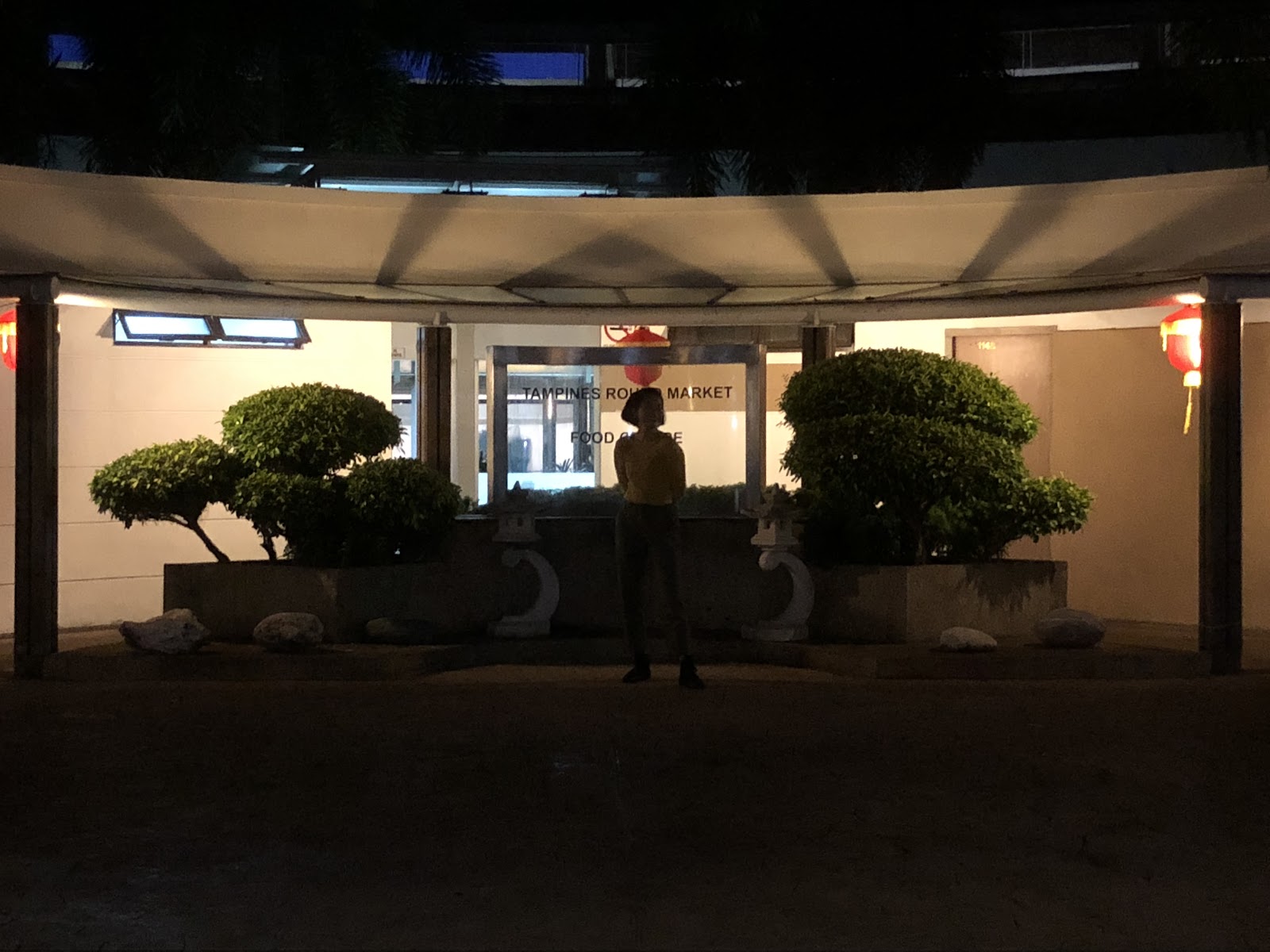 Is she looking towards or away from the players?

This round took even longer than the previous two. Each player tried a different route after they got caught, learning from their previous mistakes. 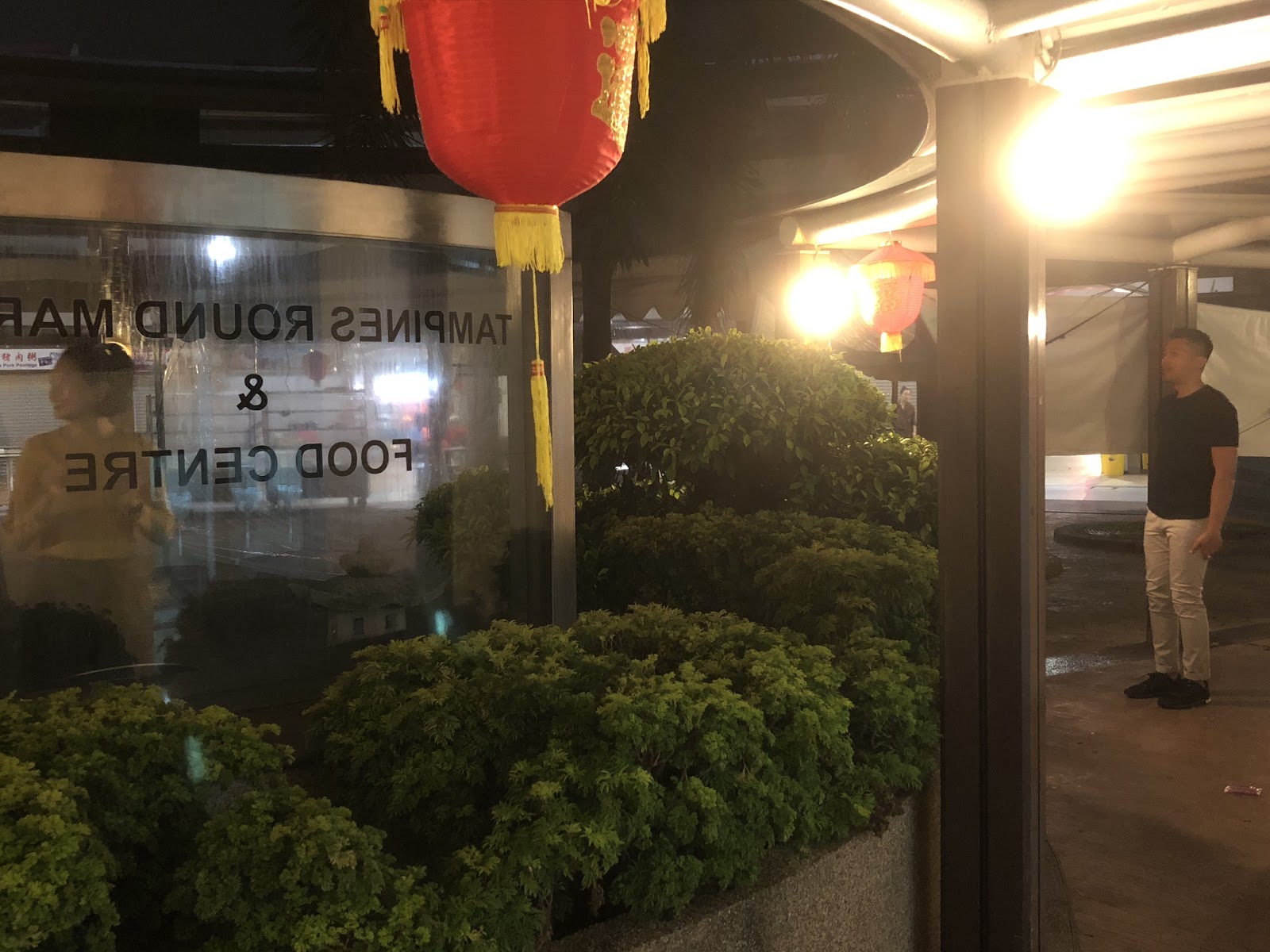 Hariz using the pillars at the side to gradually sneak up to her without being noticed.

After a few cycles, Hariz was able to sneak up to Sonia and tap her shoulder, ending the third round. For the final round, two more rules were added; the round will start with two soldiers and every player that reaches the soldiers becomes a soldier as well. Jonit was chosen to be the other soldier alongside Hariz and the fourth round began. 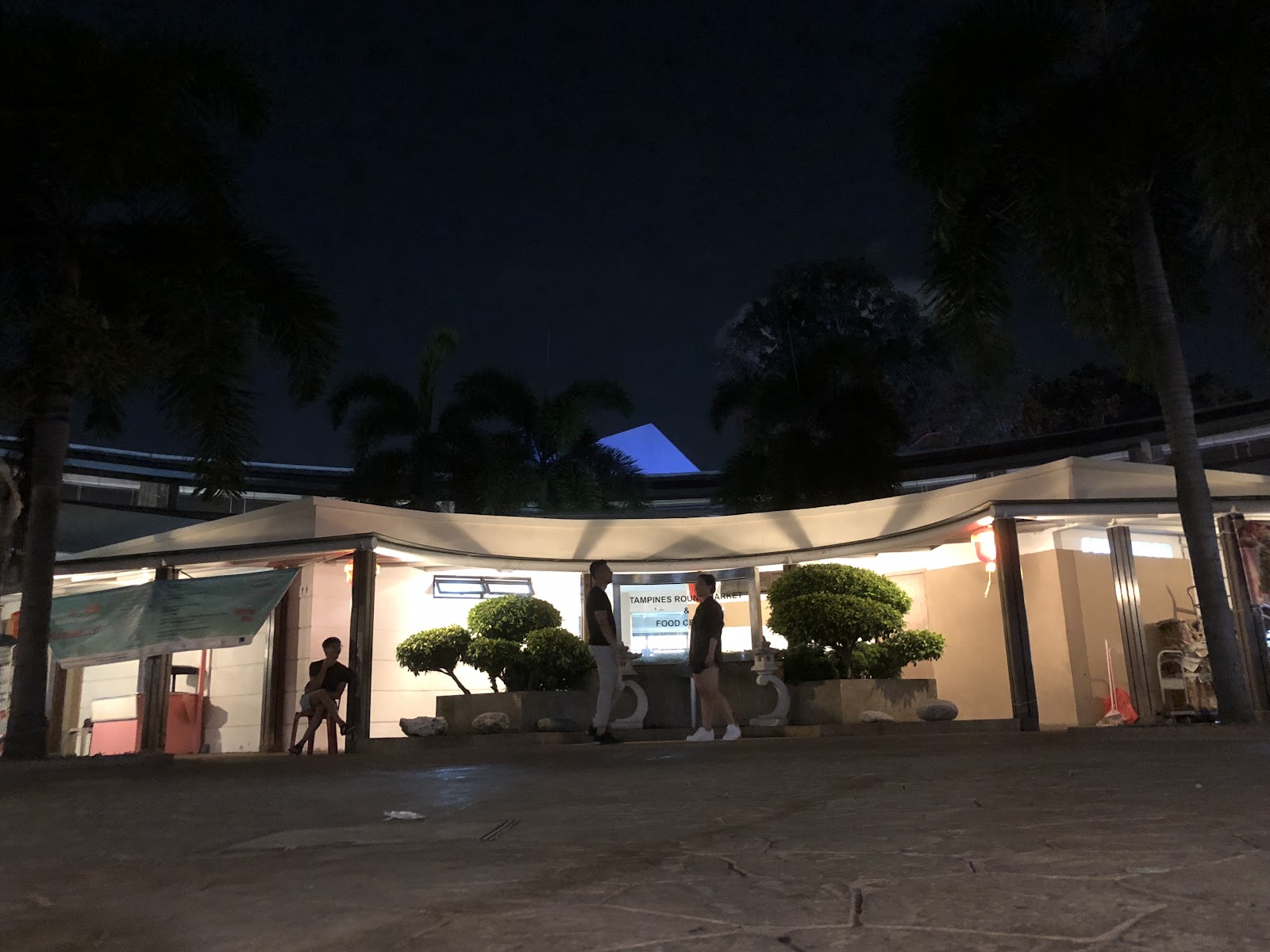 More soldiers means a larger combined field of vision. How will the players be able to sneak up to them now?

The two additional rules made the game even more challenging for the players. It forced them to come up with strategies that were not used before. Expectedly, it took a while before one of the players were able to sneak up to them and even more followed suit.

As the game went on, there were a few interesting observations:

There was a clear distinction of Team Soldier and Team Player as compared to 1 soldier against 7 players, showing what seemed to be teamwork among both groups 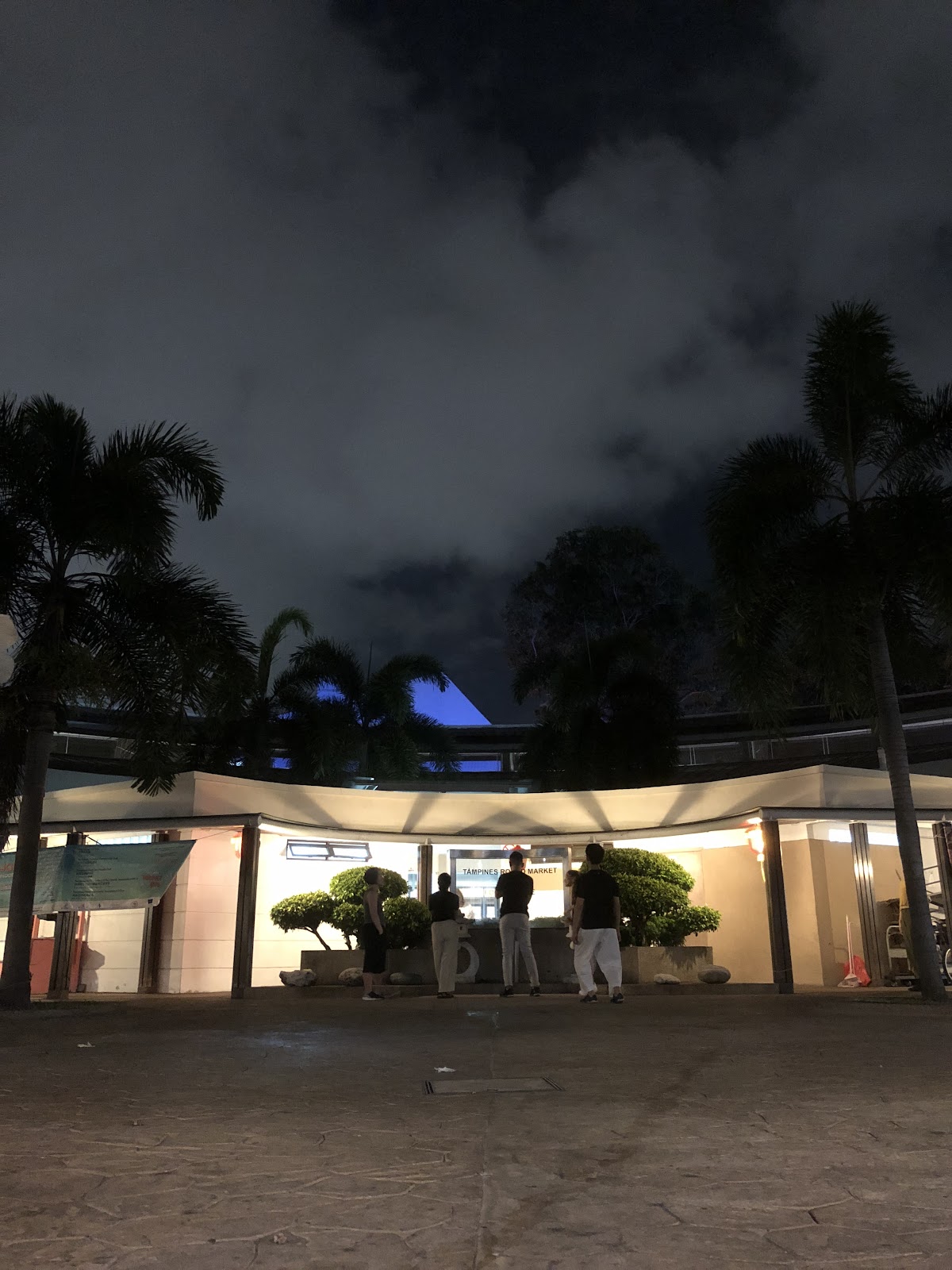 Is it even possible to reach them now? 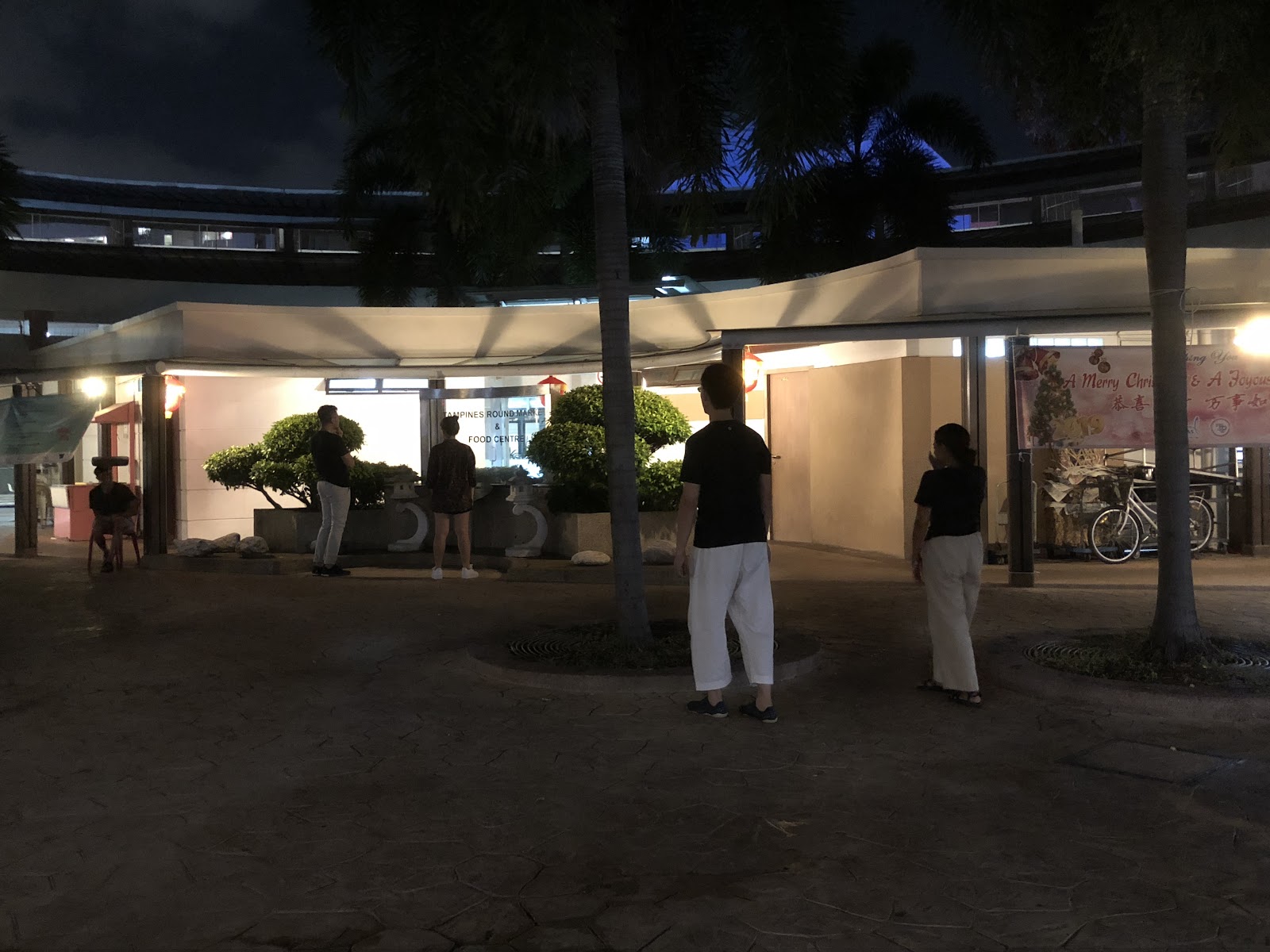 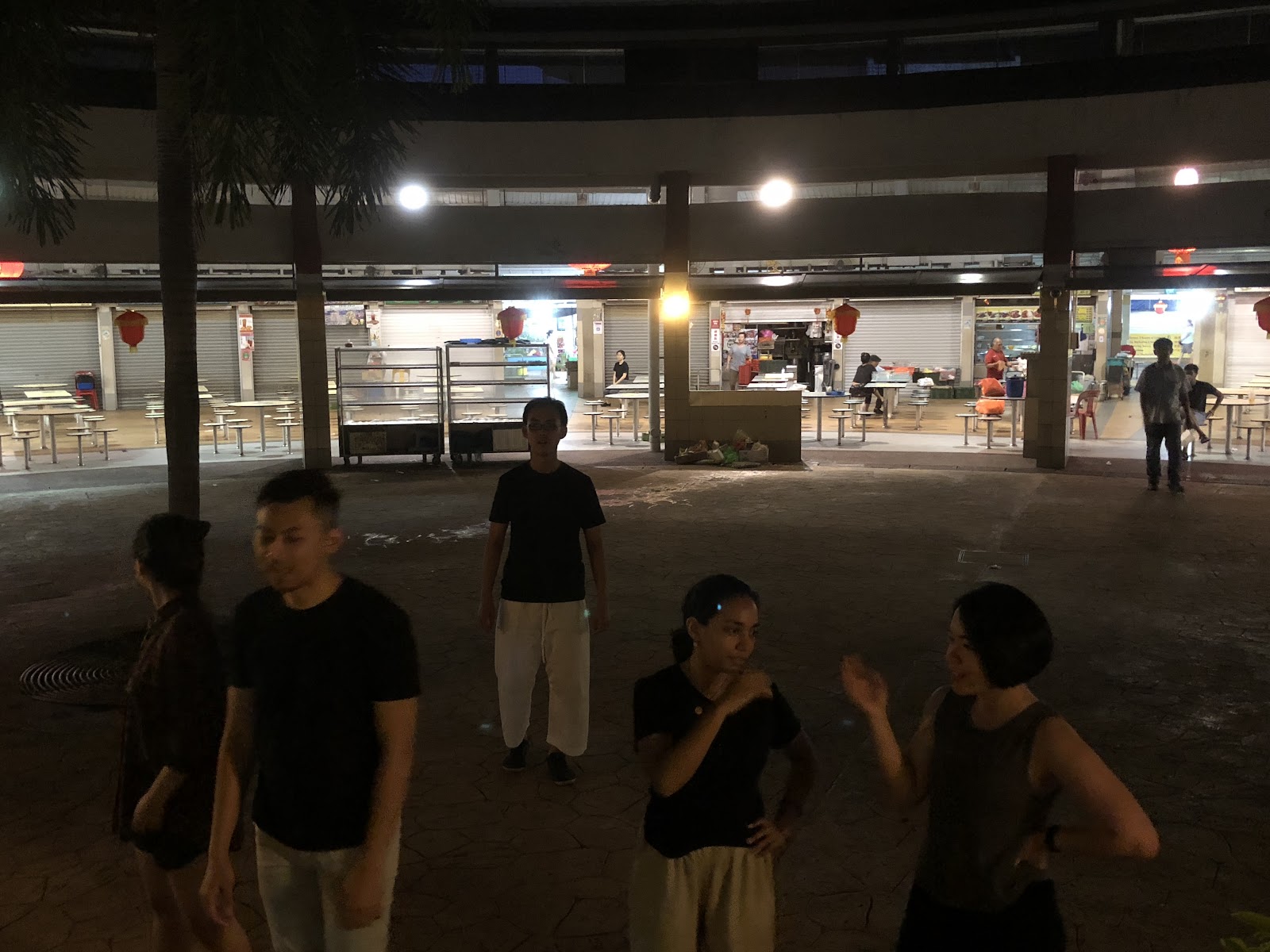 The difficulty level gradually increased towards the end of the game.

The game finally ended with one player still unable to reach the soldiers. A debrief was conducted regarding the game and a few interesting points were highlighted:

It was up to the soldier/s to decide how strict or lenient to be when catching the players.

The concept of power and its imbalance was present in the game; how the players initially had the upper hand, and it slowly transferred to the soldiers who had control of the game.

Timing, patience and strategy was key to reaching the soldier.

To make use of the space to hide and blend in while still being able to see the soldier.

Lesser crowd at night; how will it be when played during the day and with more residents moving about? 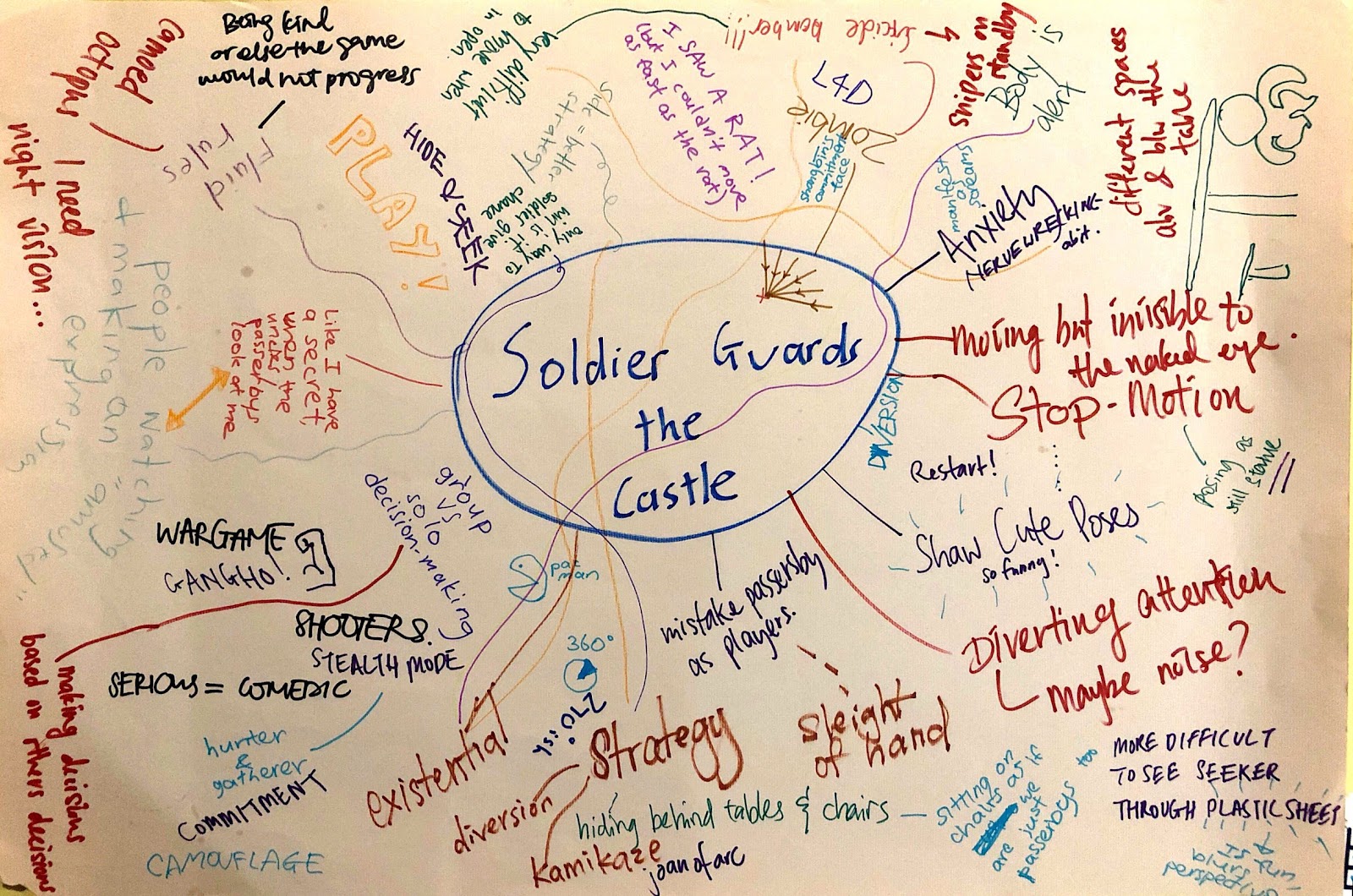 The dancers’ observations during the game. 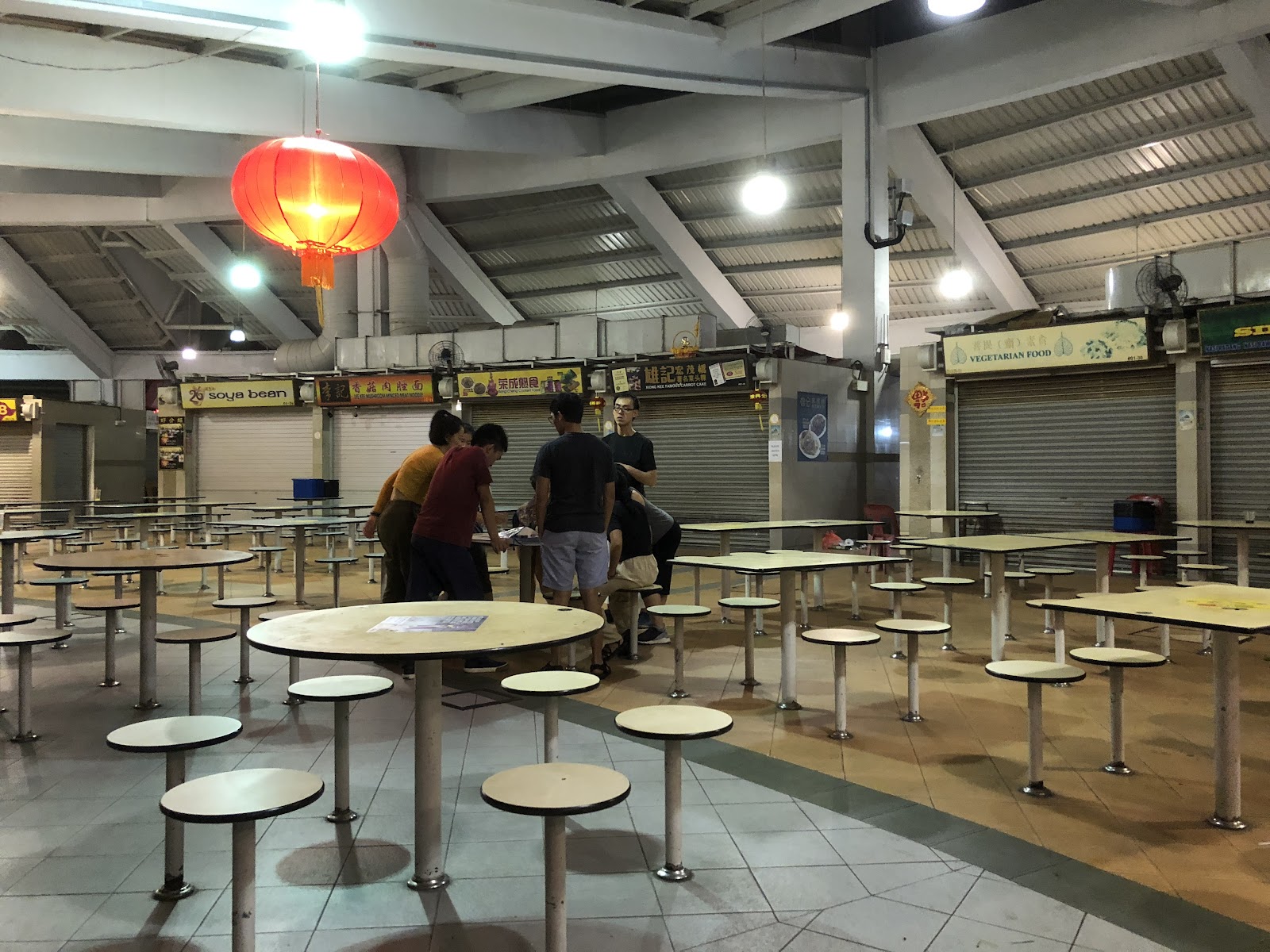 A seemingly random group of people in an otherwise empty hawker center.

After the debrief, Haizad asked the dancers to let him know the word they have chosen from the previous rehearsal. Most gave their answers straight away, whereas Jonit wanted to use “incense” but worried it would be insensitive and Carmen wanted to use a specific kind of incense but could not identify its name. Haizad helped them firm down on their theme word and instructed them to each choose a table, and he would come to each one of them with their next set of instructions.

As he went from table to table, he revealed their next task: each of them had to come up with a phrase or gesture related to their word, and length of it will correspond to the table number they sat on, in counts. He mentioned that the number of counts was decided by the dancers themselves, as they chose their own table and the tempo of counts was up to them.

He pretended to look around to come up with the number when in actual fact he was glancing over at the table number. 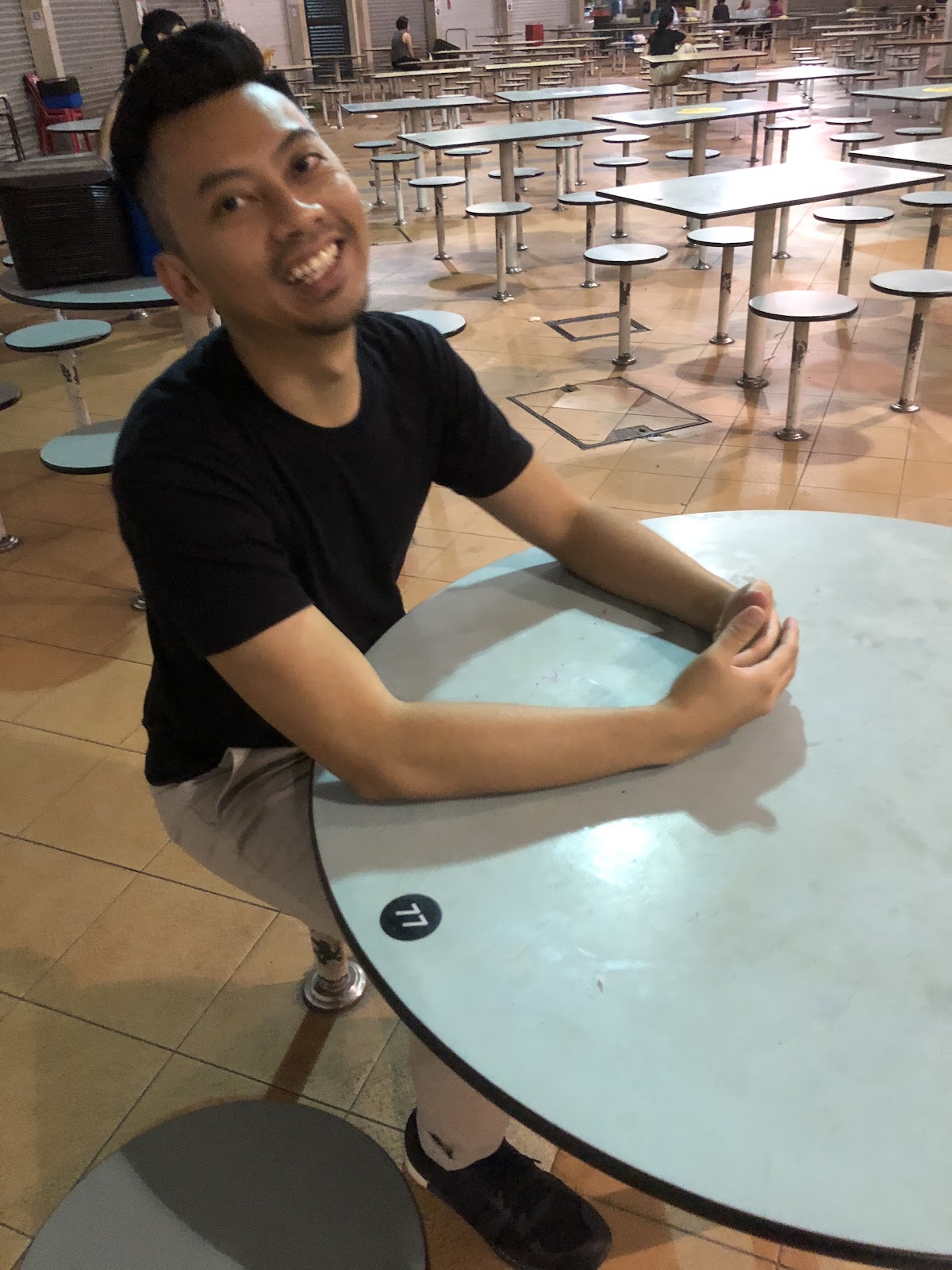 Hariz’s reaction when he realised he should have sat at a table with a lower number.

The dancers’ words and table number of counts are as follows:

(Syimah was not present for this rehearsal. She mentioned during the following rehearsal that her word is “Path”.) 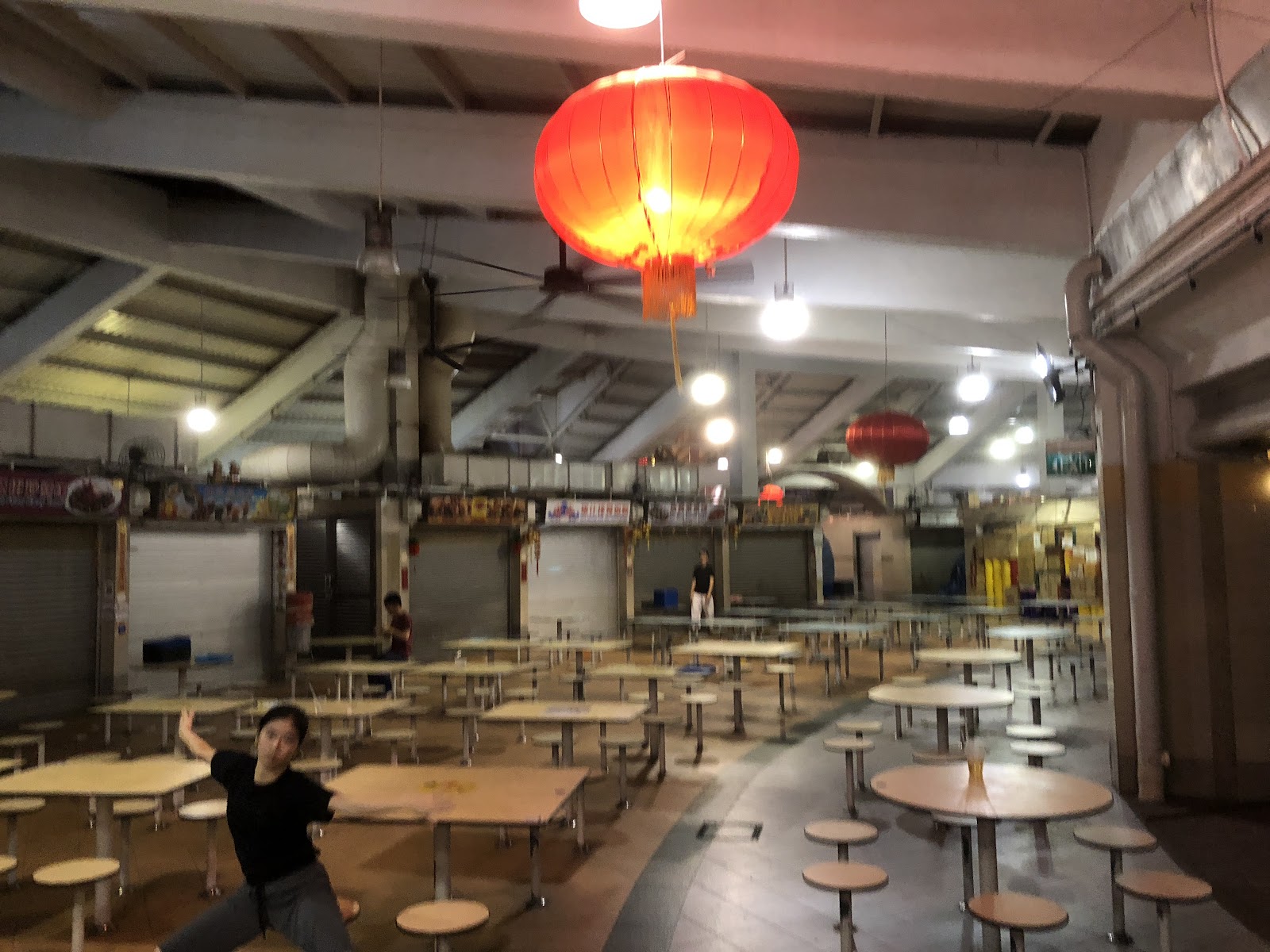 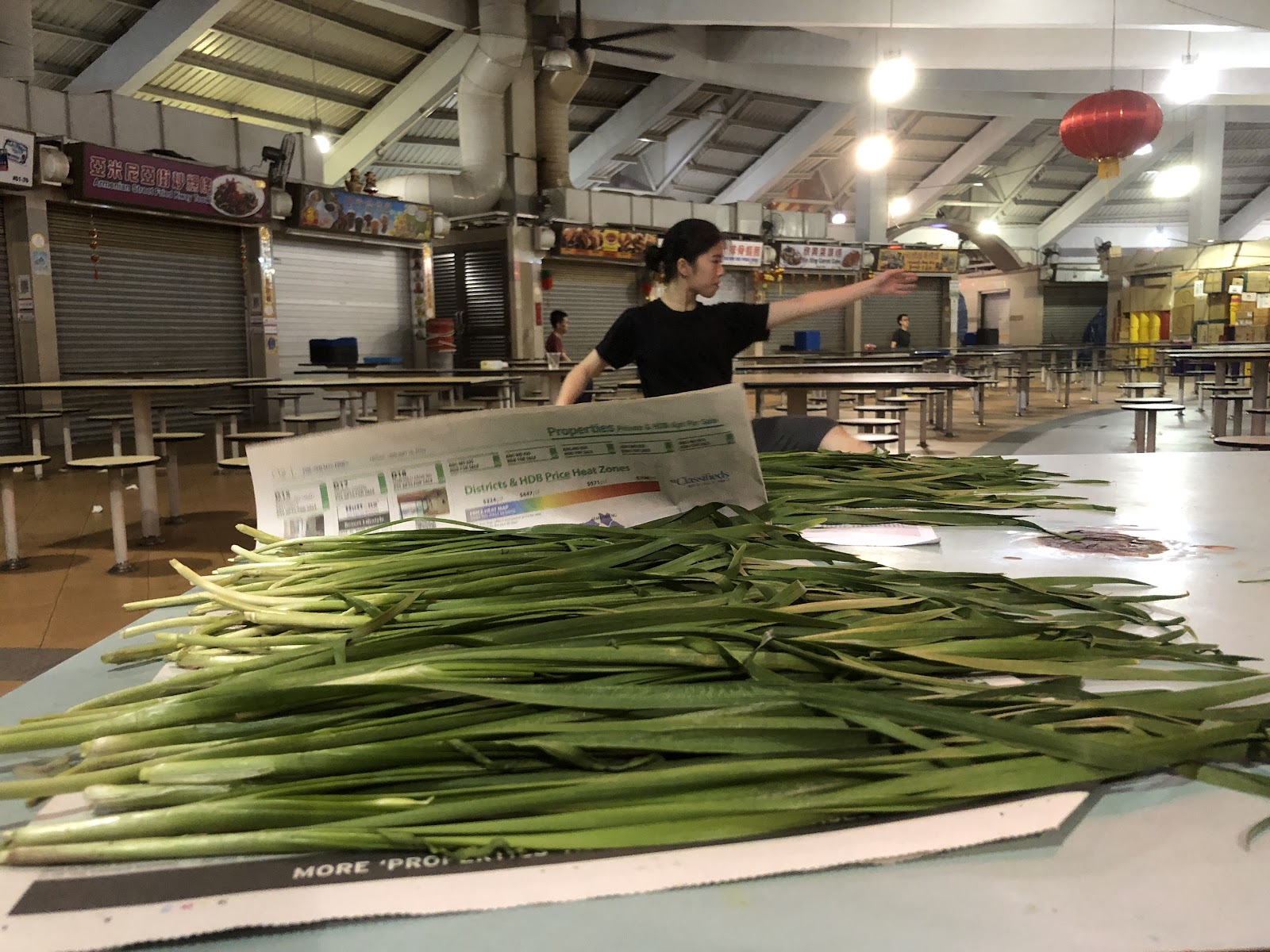 The dancers each coming up with their phrases, scattered throughout the hawker center.

After about 10 minutes, the dancers were to share their phrases with Haizad, who would go to each table in ascending order, and once done the dancer will go to the following tables. The dancers also had to say out their counts as they did their phrase. Each of them had their own way of breaking down the large number of counts and had clear distinctions from each other: