The sky was clear and many stars were out. It was the third day of rehearsing at night yet the air felt calmer. Haizad led the warm up, instructing the dancers to stand shoulder-to-shoulder in a circle. They then had to lean repeatedly from left to right; this exercise is for them to better understand each other’s body. 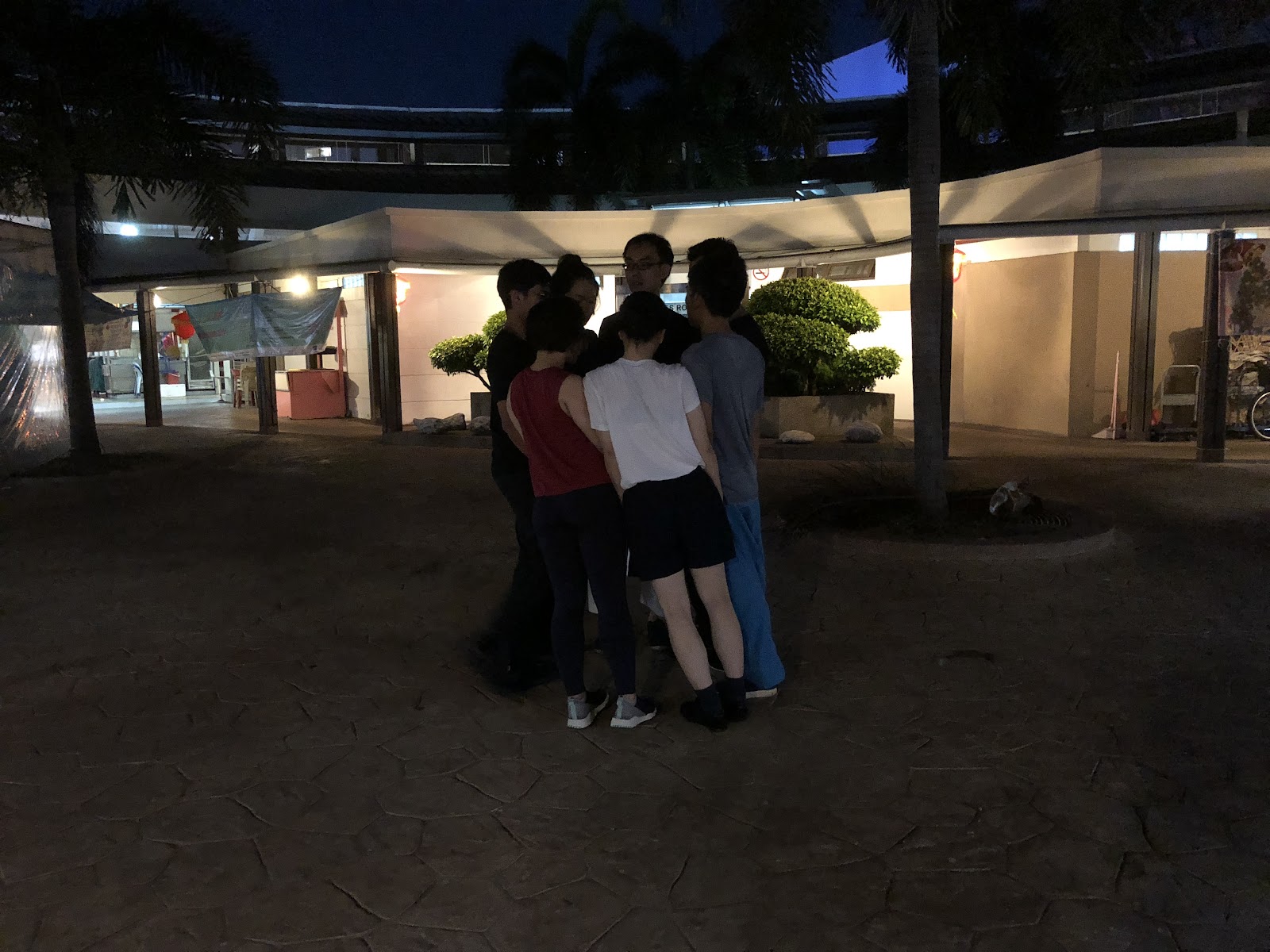 Swaying as one in the cool night breeze.

After this exercise, the next one was roaming trust fall; everyone would continuously walk around the space (in this case the center of TRMFC) and whoever’s name is called the person will have to fall as a plank in any direction. The rest then have to catch that person before they reach the floor. This is to instill trust in each other as well as to train their spacial awareness.

Nobody fell to the floor in this first round and a new rule was added; instead of the name, Haizad will call out the person’s item. There were a few instances where the person fell (lightly) to the ground as the dancers were still trying to remember each other’s items.

To make things more challenging, Haizad started calling out 2 items at a time. Even more fell to the ground since there was slight confusion; sometimes the second item to be called will already be trying to save the first item, or as everyone was saving the first item, Haizad will call out an item/person who was further from the rest. The dancer’s shared in the debrief afterwards that it was more difficult to remember others’ items and when more than one was called, they could even forget their own item amidst the confusion.

At first, the items could each be in more than one group. After this first round of grouping the items, each item then had to be in only one group. This lead to a reshuffling among the groupings and the dancers came up new, better groups.

During the discussion, Haizad mentioned, “Stressful right? You only want to dance right?” This showed that he wanted the dancers to do more than simply move in a place; he wanted them to give more intention and consideration to the performance that they will be putting up. 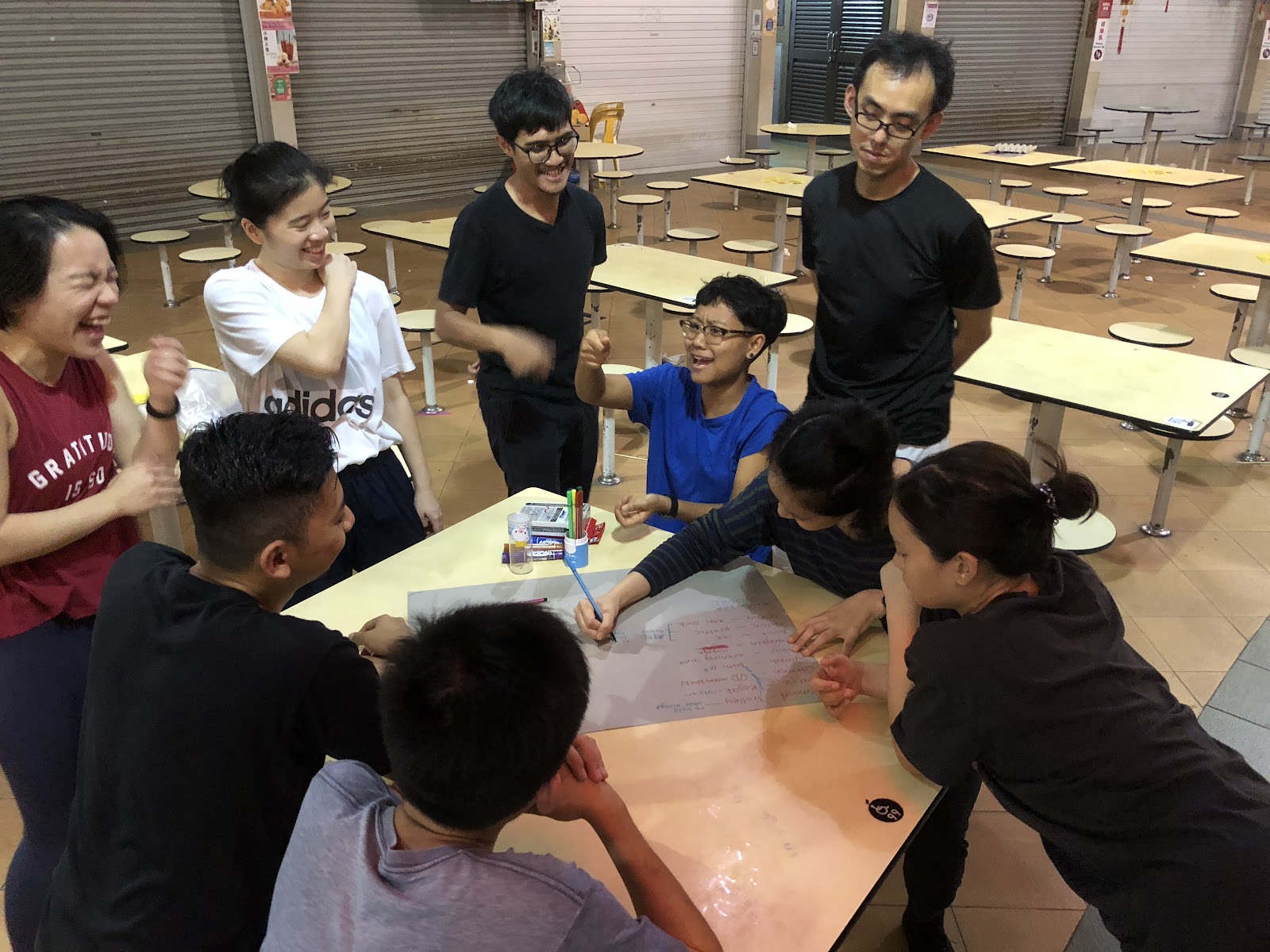 The was a lengthy exchange of opinions as they discussed how they should group the items together.

After the discussion, Haizad revealed that the groups they came up with is how he will group the dancers together, they unknowingly set a common theme for themselves. 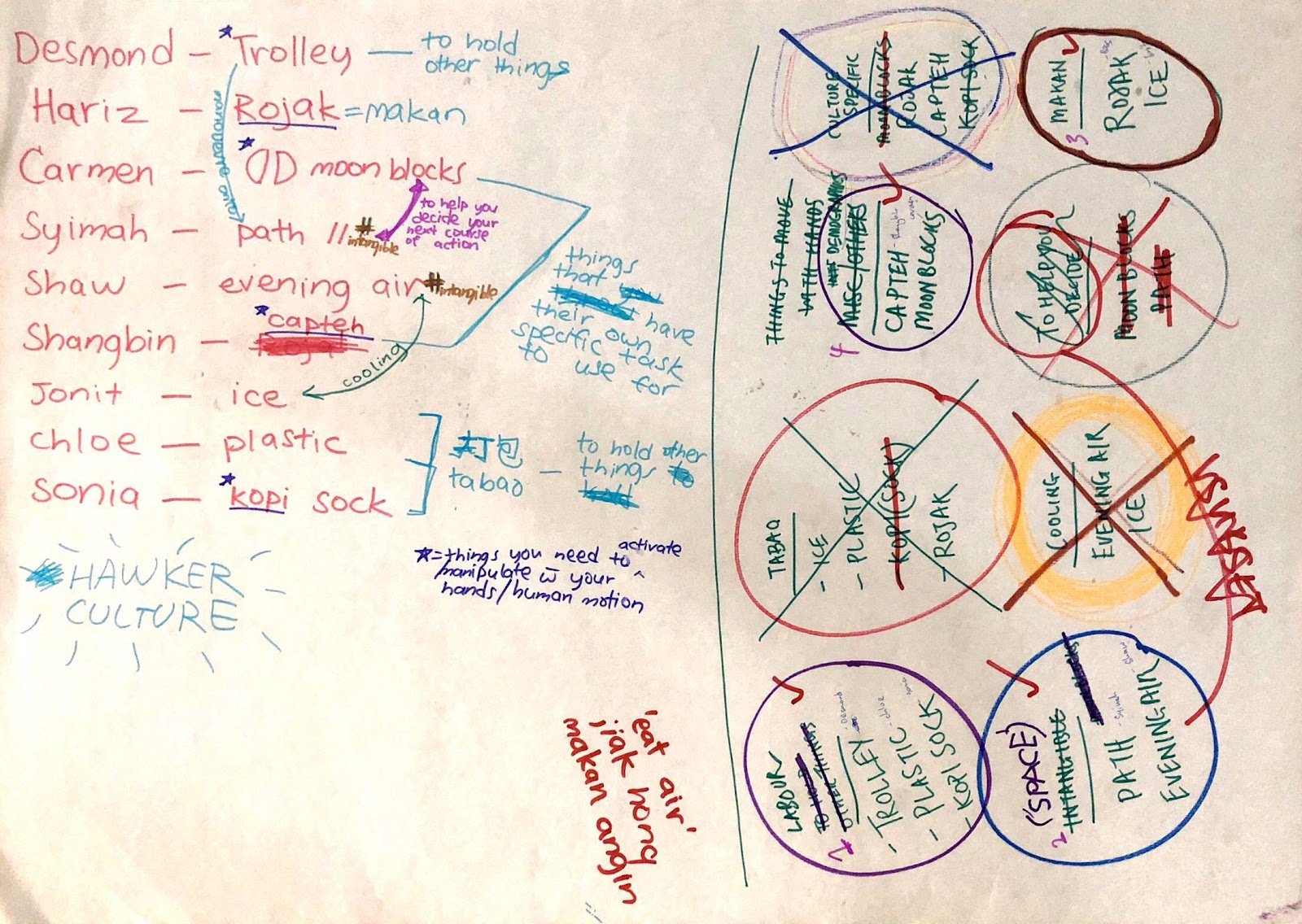 Each group of dancers were then given time to come up with a set of choreography together and they were able to choose the location. It is up to them if they wanted to combine their phrases or motives that they came up with during the previous rehearsal or come up with a new one, given that their location has changed from only being on the table & chairs. The locations were not fixed at that time and it should not be site responsive yet. Their motives could also be transferred from one dancer to the other, as long as it showed in the overall choreography. 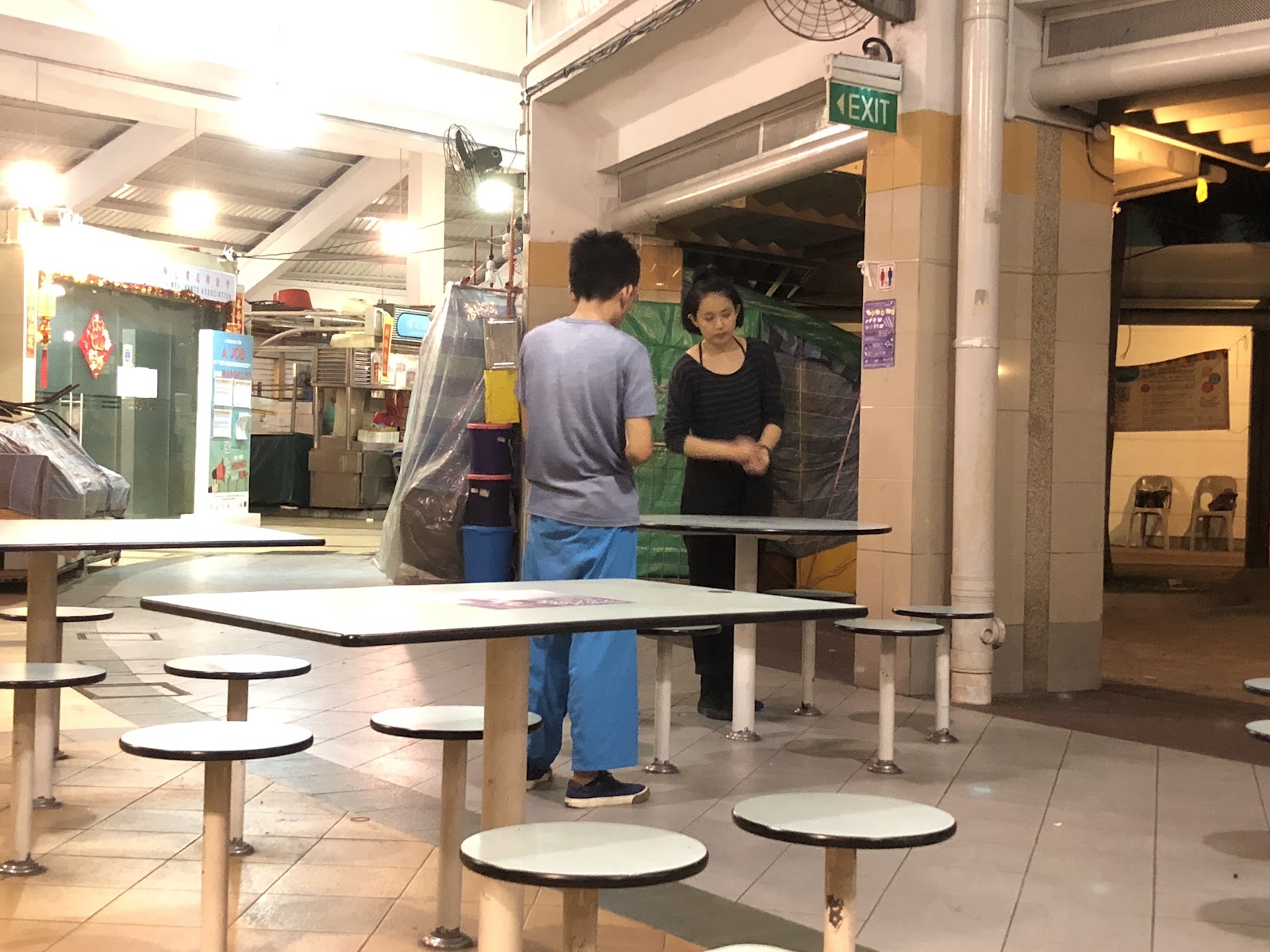 Desmond and Sonia did a combination of both their choreographies. 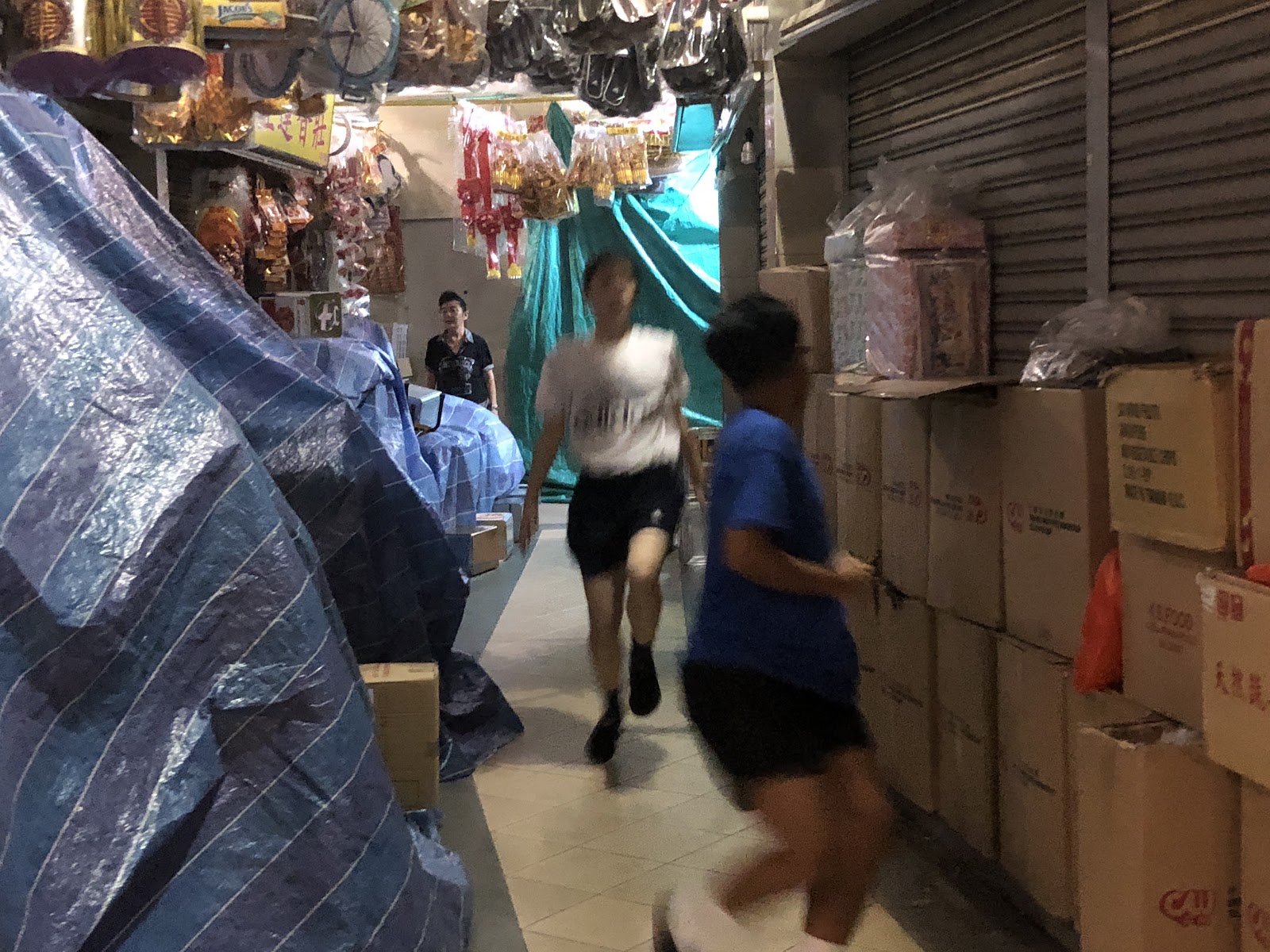 Shaw En and Syimah improvised collectively as their respective motives, with an onlooker at the back. 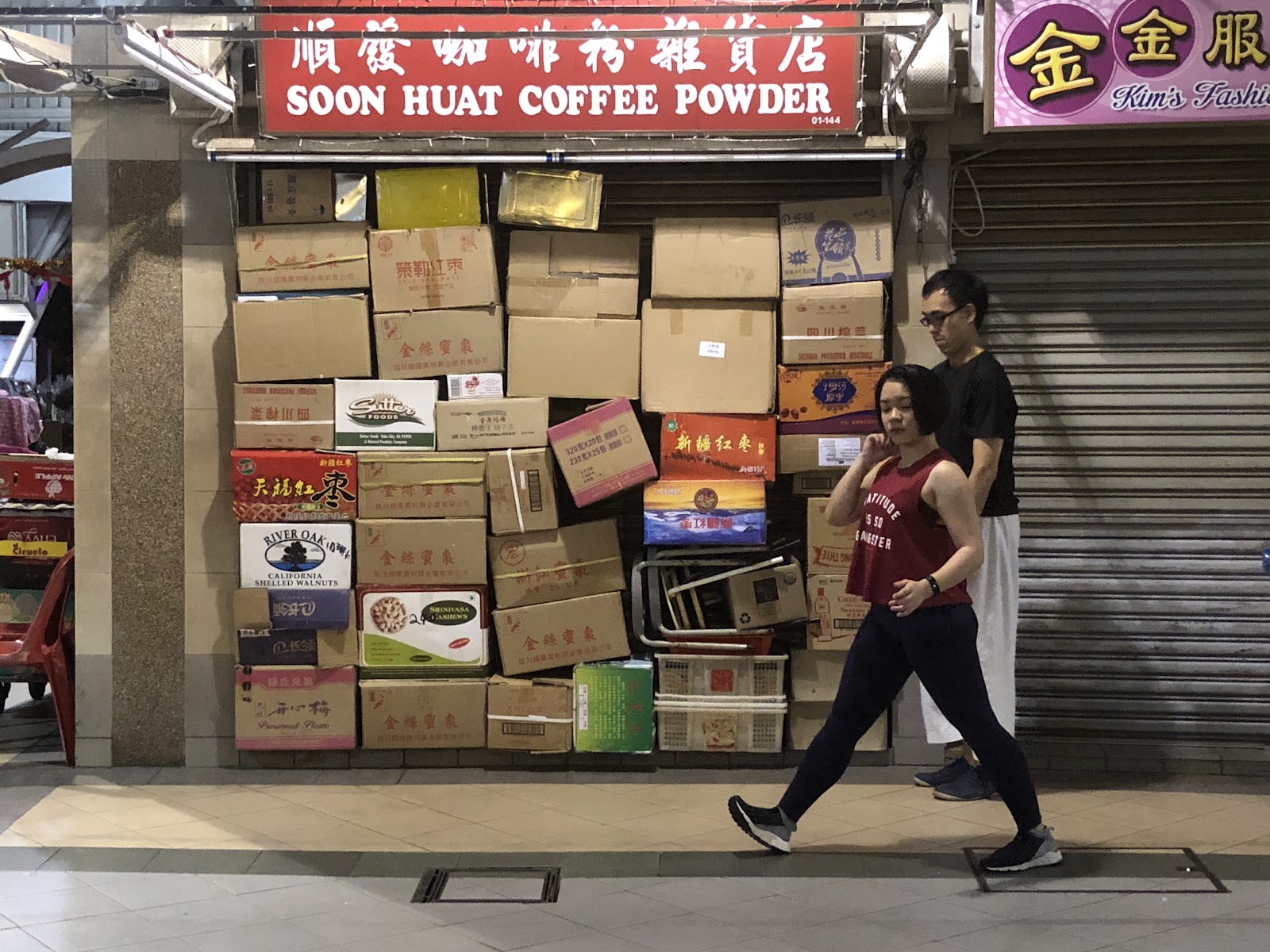 Carmen and Shangbin improvised in their motives, complementing each other through different points of contact and not being in the same position or pose at the same time. 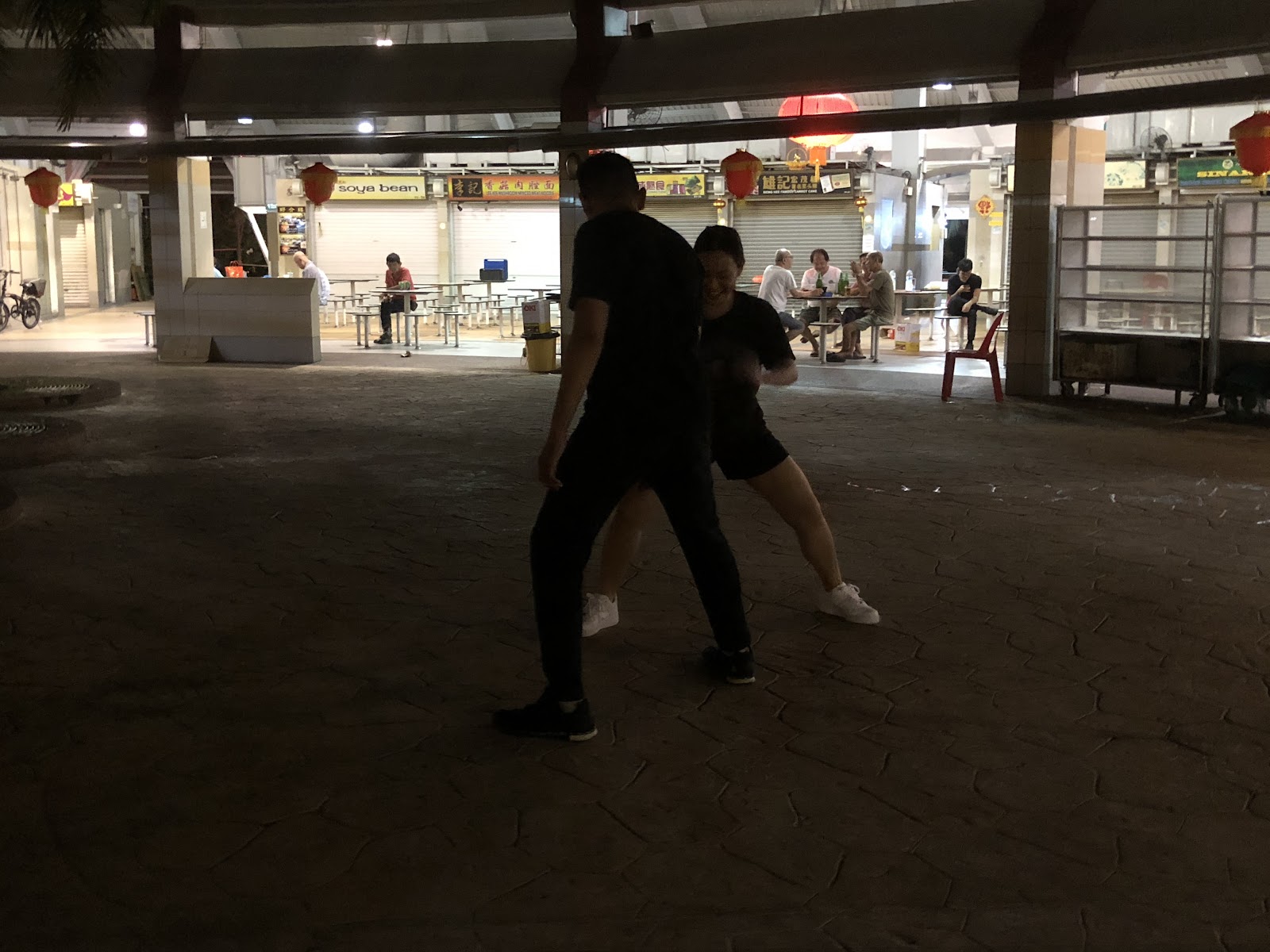 Hariz and Jonit tried exploring and combining their motives through a game.

Similarly to the previous rehearsal, each group will take turns to show what they came up with to the other groups. In this segment, Hasyimah requested everyone not to give an applause after every showing.

After each group shared their piece, Haizad instructed them to keep in mind what they created and to further develop it, maybe to about 5 minutes. He then mentioned to them that they would possibly start the performance together before breaking off in their groups and perform their respective group choreographies. In addition, there would also be external collaborators and they would need to piece everything up together with them in a future rehearsal. 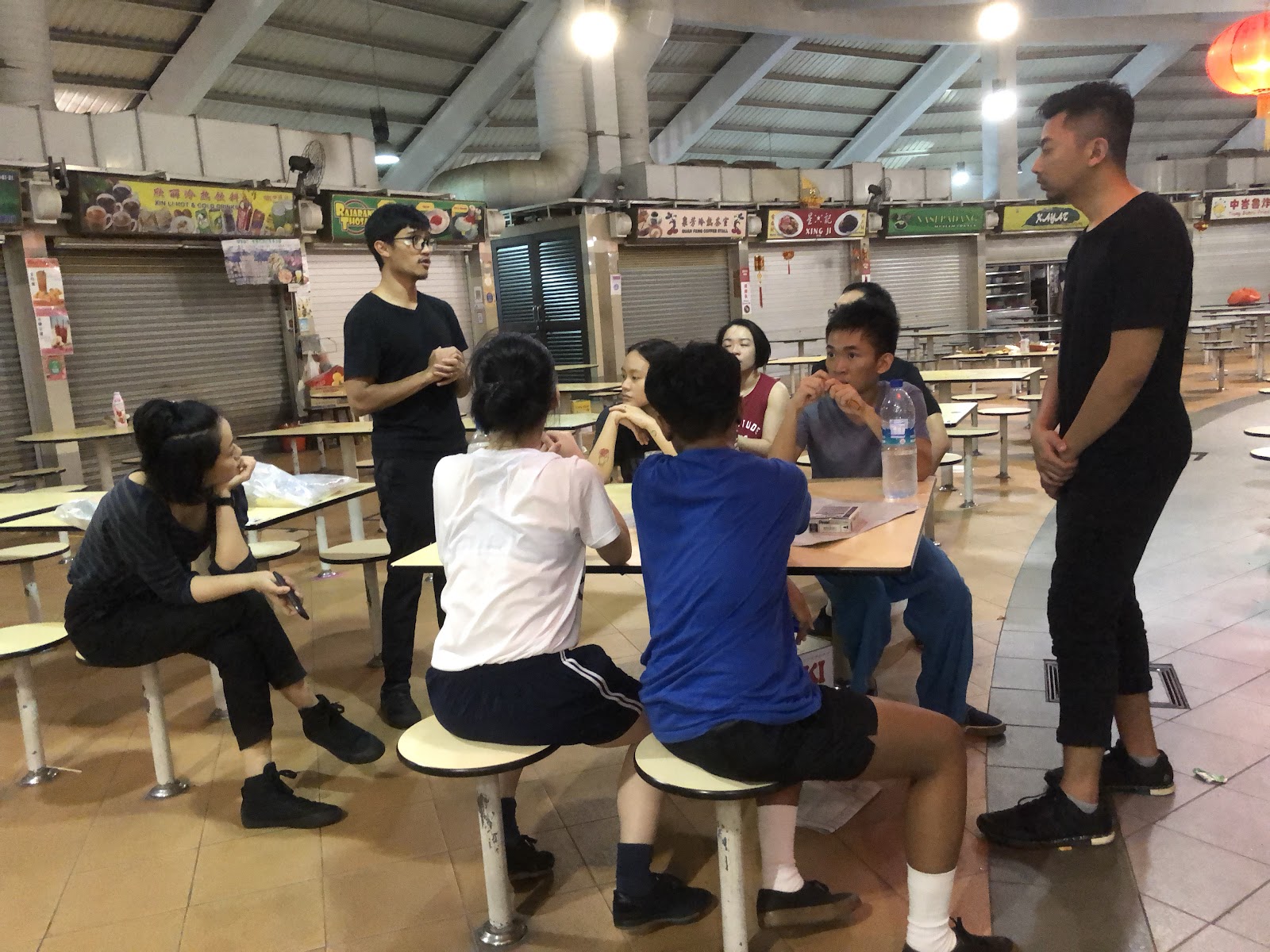 Final debrief before the end of the rehearsal.