The rehearsal started off with Sonia instructing all the dancers to walk around the center segment of TRMFC, to fill the space as much as possible. As they walked around, they had to non-verbally acknowledge each other’s presence by winking. After some time, their next instruction was to stop and resume walking collectively, without any form of communication, a way to sense and synchronise with each other. At one point after stopping, they were instructed to close their eyes and Sonia asked them to point to a few individuals, and asked what someone else was wearing that night. 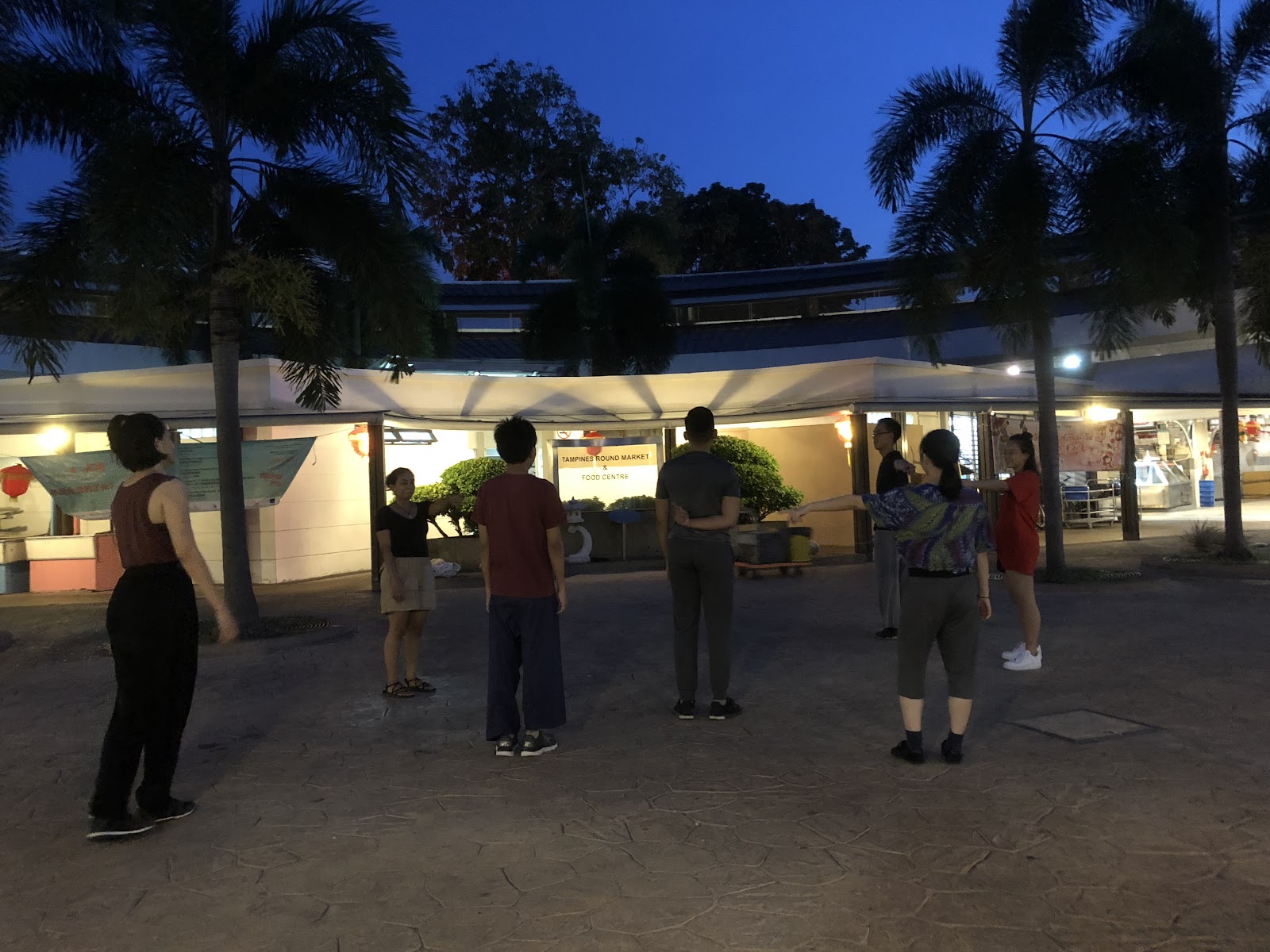 As they filled the space, they also had to feel each other’s presence.

After opening their eyes, Sonia introduced 4 points to them, each point representing an issue/crisis; 1) financial or practical issues, 2) family/relationships or social issues, 3) big world issues and 4) existential issues. She asked them to close their eyes to think about these 4 points and let their bodies naturally gravitate to any of them; either 1 point or they could stand in between points if there were more than 1 issue/crisis going through their mind. Afterwards, each was given a pen and paper, invited to find a spot in the hawker center and continuously write for 3 minutes non-stop about issues/crisis in their minds or anything that matters. 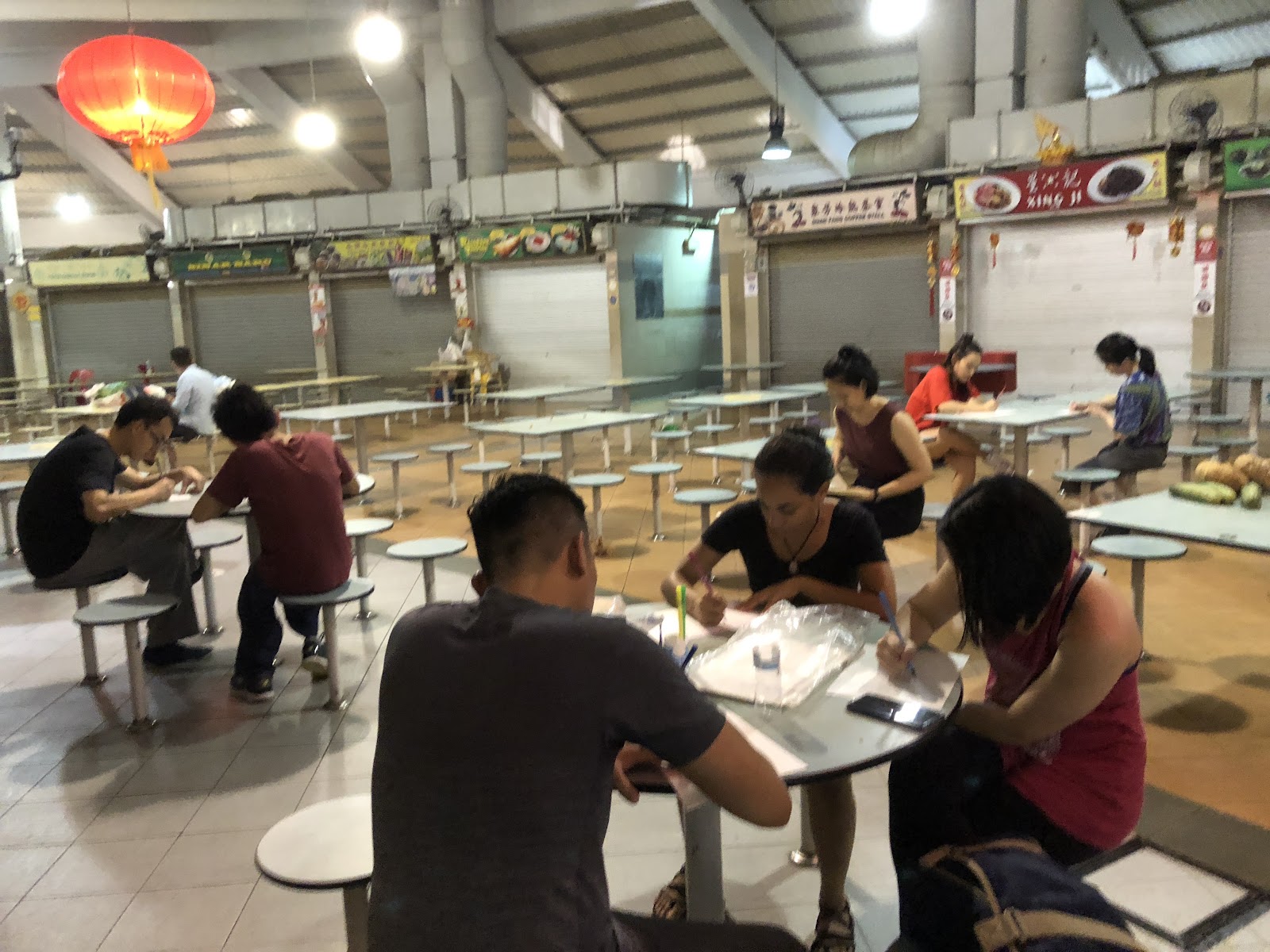 Putting their thoughts into words. 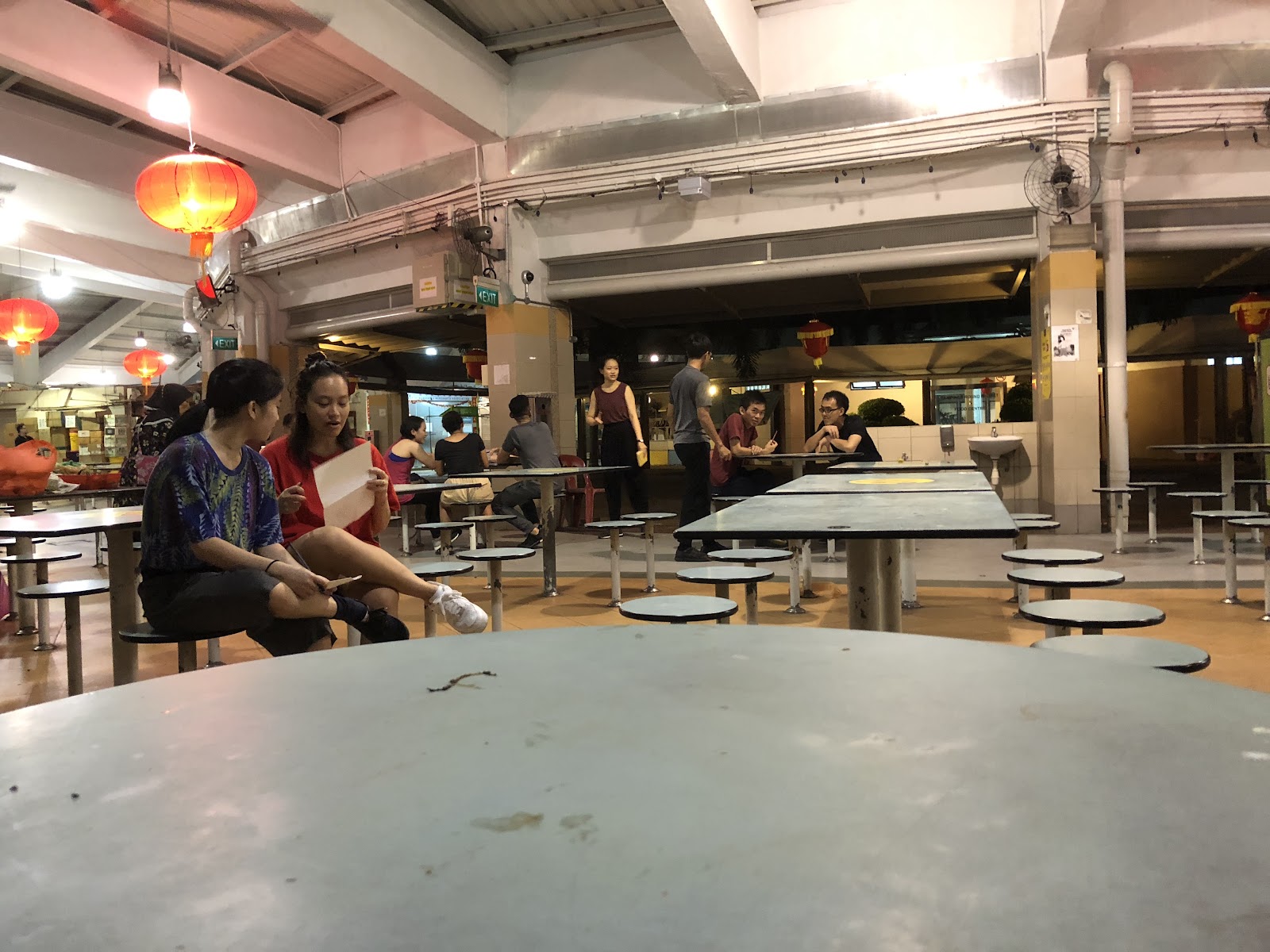 The phrases/words given based on what their partners shared:

Carmen : We are it

As this process was taking place, Haizad and Hasyimah were discussing with Aameer regarding the types of sounds to be used in the track during the performance. 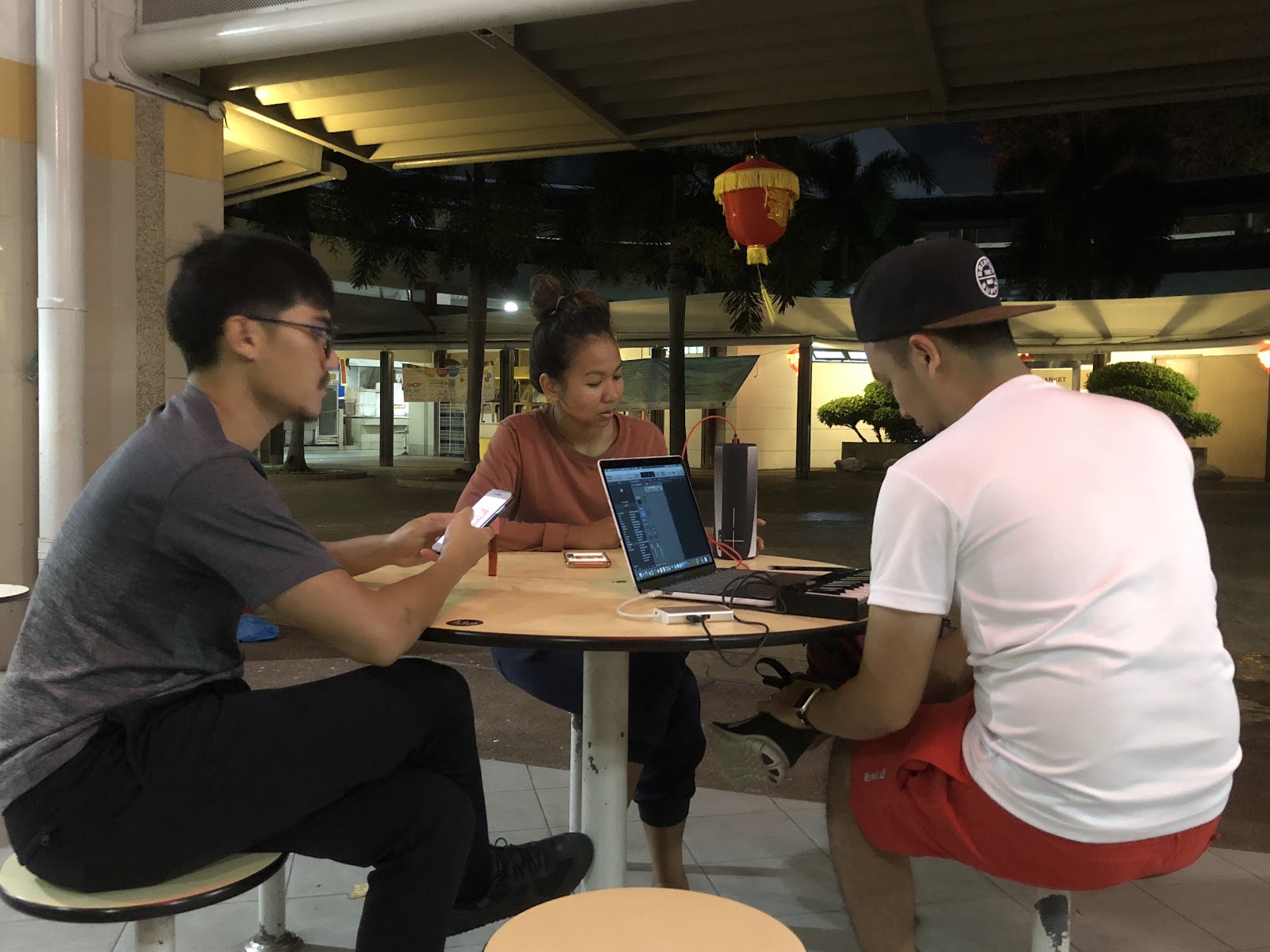 An experiment of sounds.

Chloe then instructed the dancers to each come up with 4 counts of movement, stillness, sound, gestures etc, with reference to the 2 points from before; the points shared earlier on and their own prop/word from the previous rehearsals. After some time, they came back together in a circle to share and combine their 4 counts into a phrase that could be used during the performance. Somewhere in between, Haizad added in 3 wrist flicks to add in the Malay dance keluk paku form (rotational philosophy from wrist) in the movement. 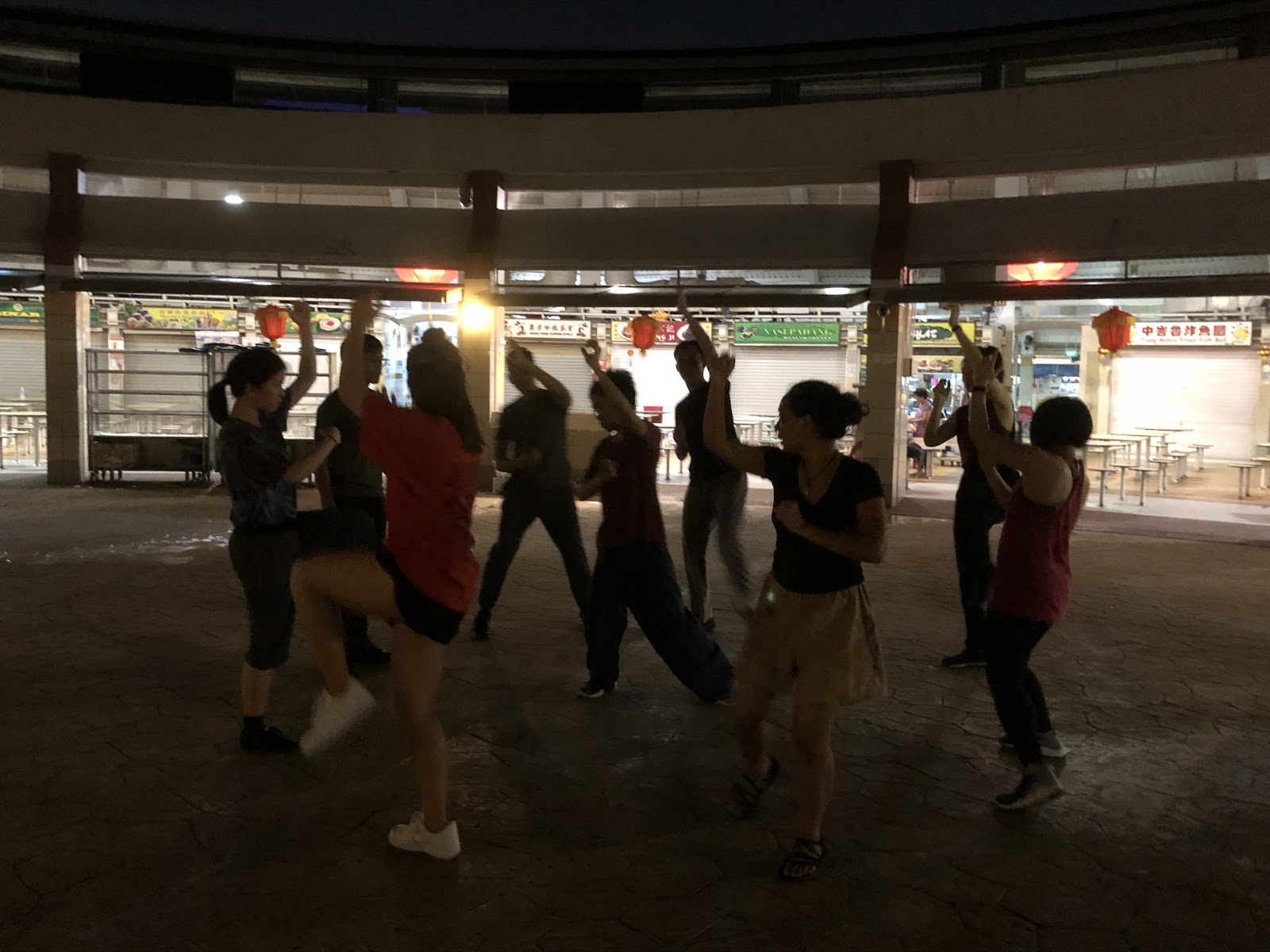 They were then introduced to another 4 points about what they went to TRMFC for; 1) cheap food, 2) good relations, 3) hawker culture and 4) why TRMFC and what about after its renovation? Similarly, they had to “choose” from those points.

After which they were instructed to repeatedly execute the co-created phrase with those points in mind. They could do it at their own pacing, textures and dynamics. As they repeated the phrase, they had to add in gestures from the TRMFC in between. The gestures had to be moving while the phrase was done while standing in one place. They could also interact with each other as they went along, even if they were not doing the same step; they could freely go in and out of the phrase. Towards the end, they had to gradually move closer to each other and find a way to naturally synchronise.

At some points during this process, Shaw En was running around the space, standing out from the slower and more stationary dancers. Another interesting visual was Shangbin being the only one out of sync with the rest, and slowly blending in.

Haizad joined the dancers after that to share with them what he had in mind for one of the segments during the performance. If possible, he would like to have the voices or hidden voices about TRMFC, which can include but not limited to stories of/from the people, memories and concerns about the incoming renovation. It would be best if the hawkers and stall operators of TRMFC themselves shared through a mic, otherwise an audio recording could be played instead. If all else fails, the dancers could be the ones sharing the stories on their behalf. It could be a challenge to convince the more reserved people to openly share about themselves especially during a performance. It could be possible if there was a script to minimise delay while recollection, but it would not seem as organic or natural.

There was a discussion if there could be prizes given when the audience can guess the origin of the stories shared or which stall it came from. However it was dismissed as it could send a different message or tone about the performance.

Haizad then explained to the dancers the structure and sequence of the performance developed so far; from the one line that they ended off previously, they would move into the center of TRMFC and perform what they came up with earlier on during the rehearsal, performing the phrase to their own dynamics and tempo before gradually synchronising and ending collectively.

During this time, Hasyimah was conversing with one of the members from the Kayat stall. They have been slowly warming up to our presence and it seems that they are more comfortable with us and what we have been doing during the rehearsals. 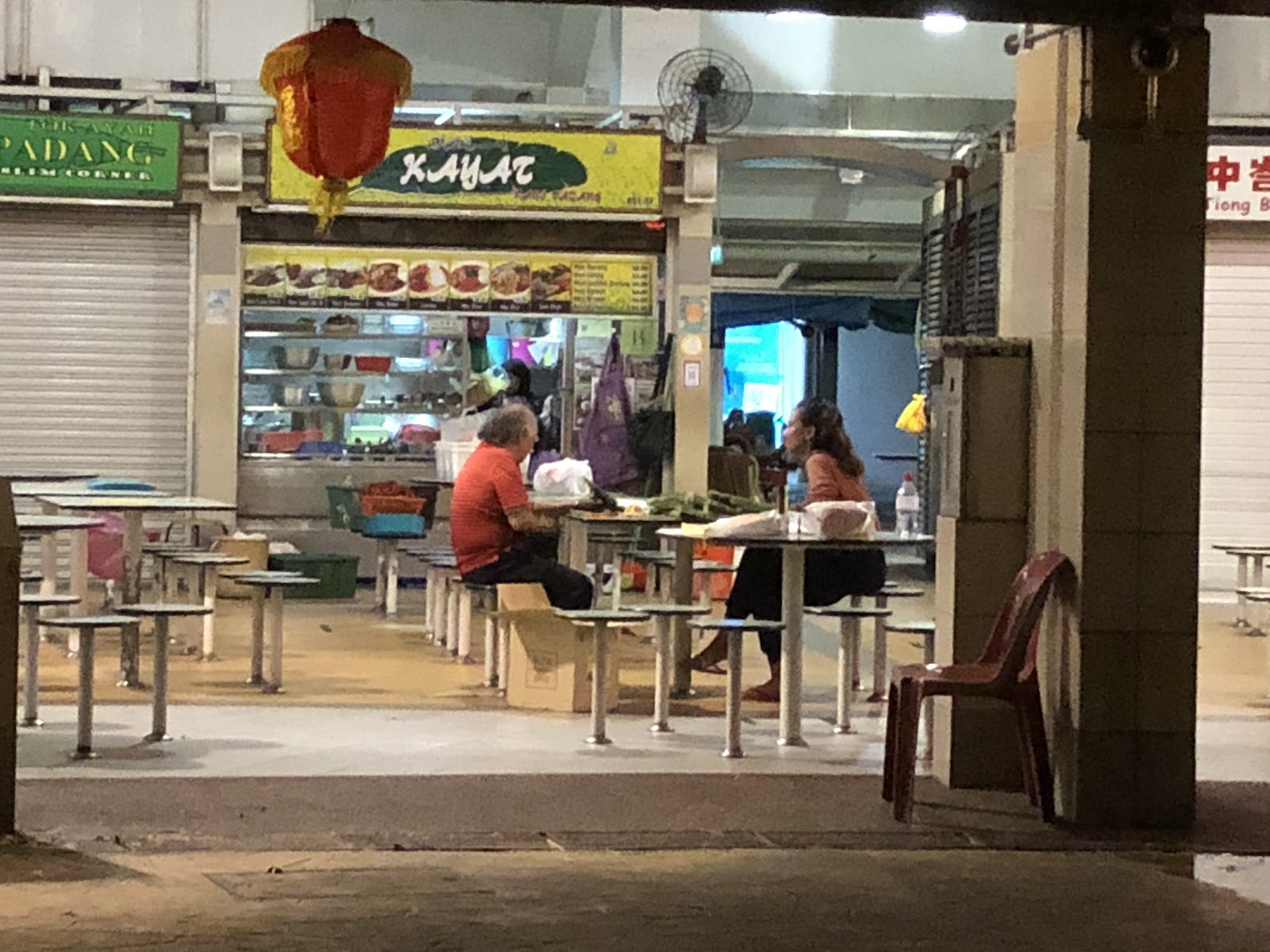 Hasyimah continuing to connect with the hawkers.

On the other hand, Aameer has been trying out many different sounds to use during the performance. Some sounded more traditional like the Javanese gamelan, while others sounded more foreign or alien to the space. Hasyimah shared at one point that he creates according to/with reference from the dancers’ movements as well as the energy of the space. This, again, ties in with the principle of a site-specific work being more in-tune and reminiscent of the performance area and its atmosphere; be it flowing with or against the energy, any undercurrents or underlying sounds that are overlooked etc.

Sitting in and soaking in the surrounding energy.

Haizad then instructed the dancers to try everything that has been developed so far, from the top. This was possibly a way to see how everything ties in together as well as for Aameer to get a clearer idea of the performance so he could experiment with the sounds. 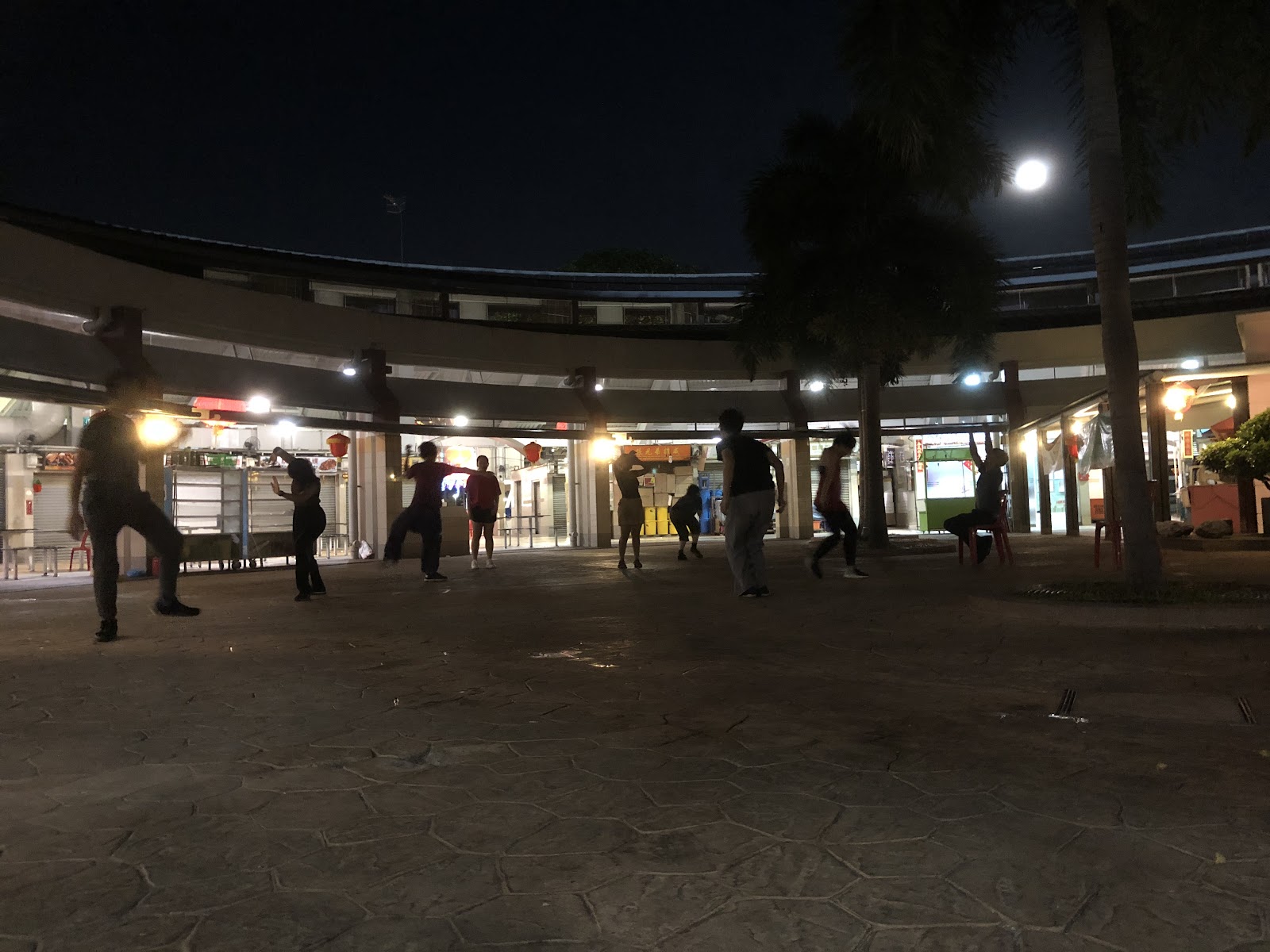 Moving shadows in the night.

As they were performing, there were a few passers-by heading towards the washroom in the center. They curiously looked over to watch what was happening, some stayed for a short time while others only glanced before moving on. It seems that the more rehearsed at TRMFC, more interest will be garnered as we are gradually making our presence known.

During this run, I also had a conversation with Hasyimah with regards to how I felt about the process. I responded that it reminded me of Sharul's (One of P7:1SMA Associate Artists but not in District 18) Thesis of Method 2 in approaching choreography; the dancers have close to equal voice to the choreographer/instructor. I added that District 18, being a site-specific performance, is about TRMFC and its people. As they rehearsed for District 18, the dancers were able to voice out suggestions and opinions with regards to the choreography and ideas about engaging the audience/residents. This was especially apparent when the dancers co-created a phrase and continued to exchange ideas. It is an interesting parallel and I believe that the processes behind developing the performance is as important as the performance itself.

After trying everything from the top, everyone gathered to discuss. While they were exchanging their thoughts, they were distracted by the sounds that Aameer were playing as he was exploring different genres of sounds/music, some of which resonated more with the dancers. They had to remind themselves to pay attention to the rehearsal and helped each other to snap back into focus. 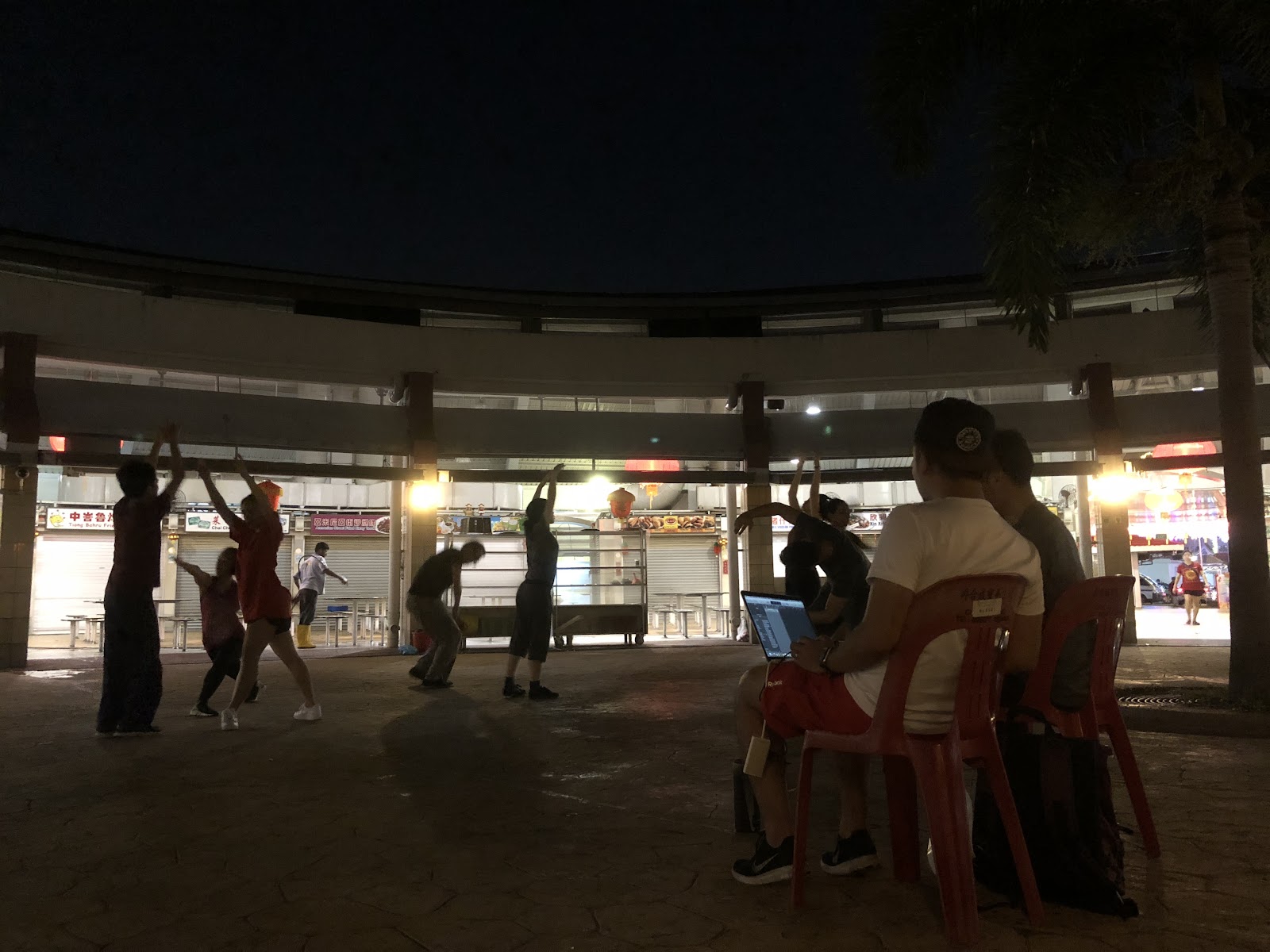 Sounds & musical rhythms were welcomed after only rehearsing with ambience.

After discussing about the previous run, they tried Segment 2 one more time. This time, there was floor cleaning in progress and it added another layer of sound to the ambience of TRMFC.

At the end of the run, everyone gathered again for the final debrief. Haizad shared that the sound scapes are still being experimented and will be further discussed with Aameer. He added that the performance is slowly coming together and to remember what they did during the rehearsal. He also wanted to include a trolley that they can interact with during the last segment. 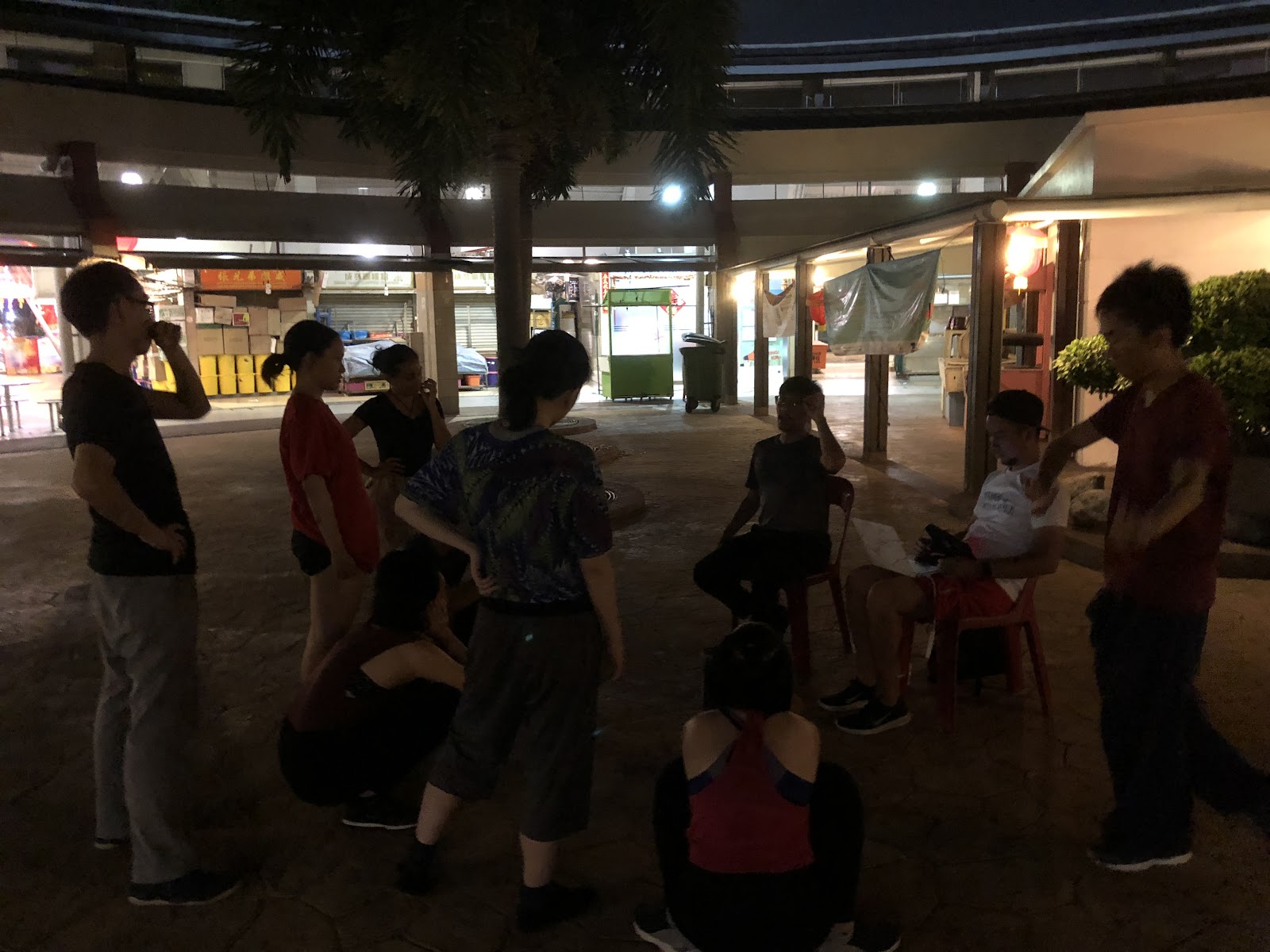 As everyone headed to the van, some of the dancers suggested having 1 or 2 studio time for rehearsal, to which Haizad and Hasyimah considered. However, they also shared about the difference between practicing in a private space as compared to in a public space, and the significance of being in the space as much as possible, since it is a site-specific piece.