Since most of the dancers were not present during the previous activation, Haizad updated everyone what was done and the new developments about the performance; each dancer will have their own trolley, the TOTO/lucky draw concept. 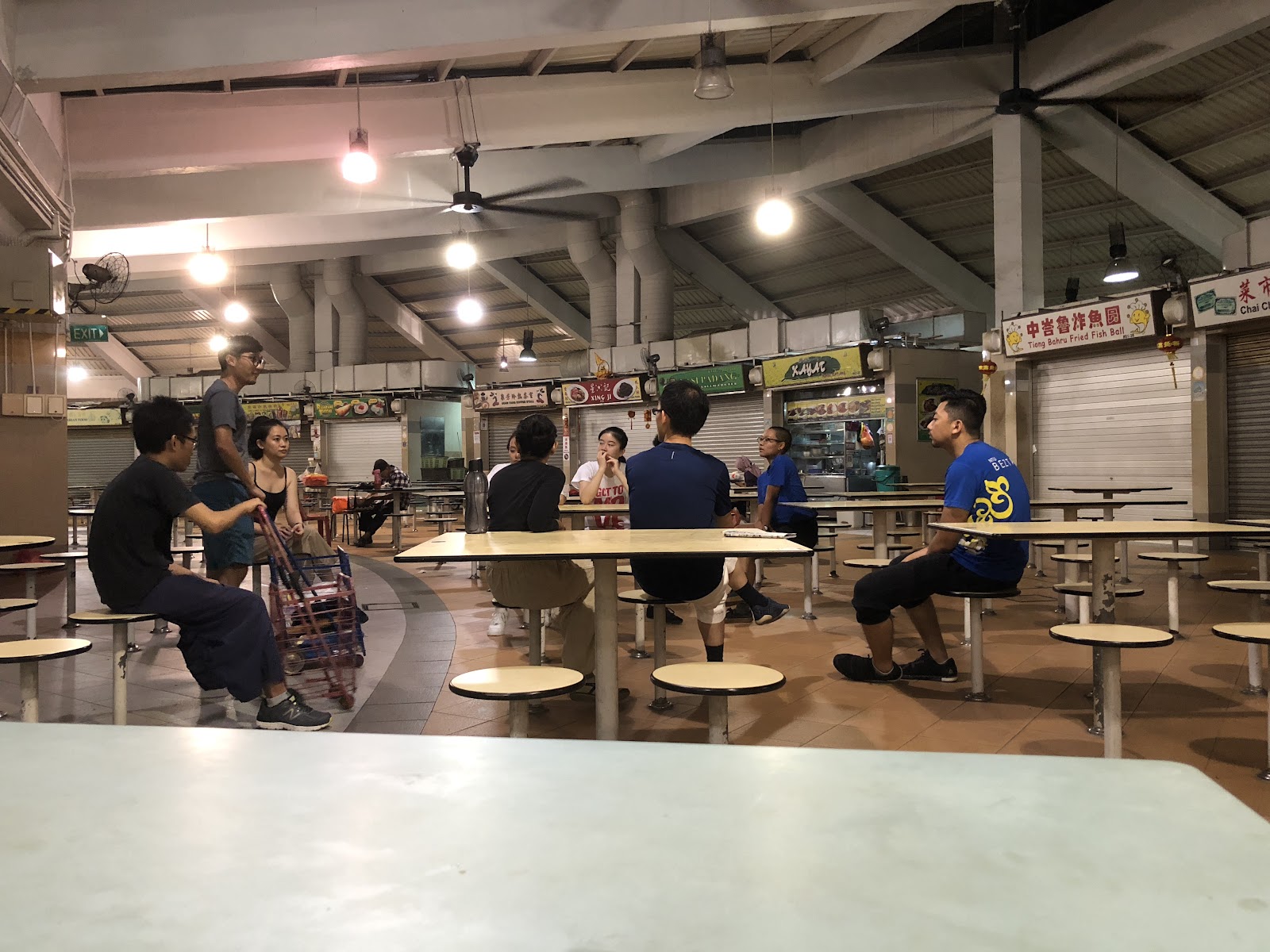 Bringing everyone up to speed about what was done during the previous rehearsal.

Everyone then recapped and taught the co-created phrase done during one of the previous rehearsals. This time, there were two trolleys for the dancers to try interacting with, more will be added later as they were still sourcing out. 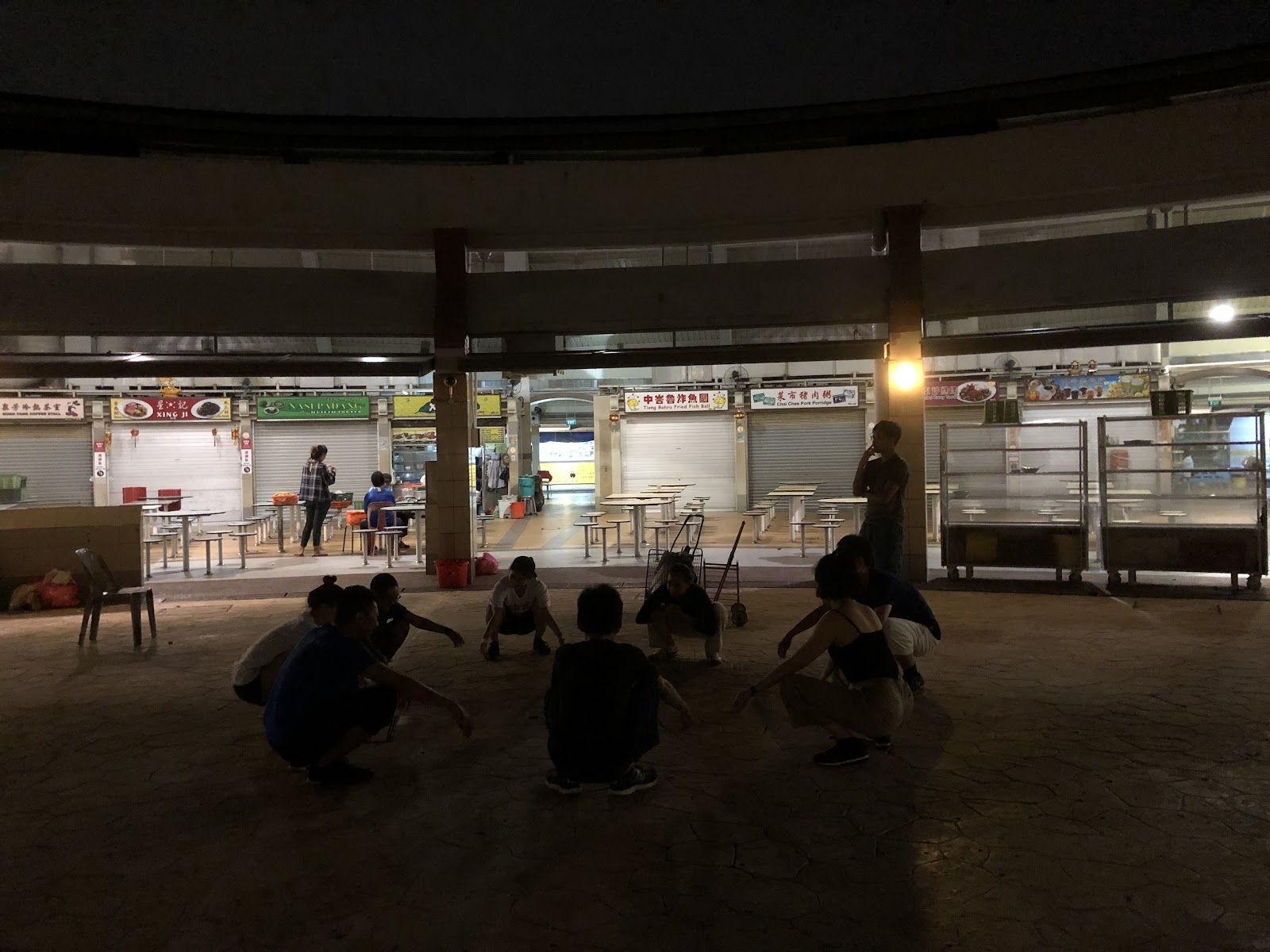 At the start of this rehearsal, Hasyimah approached the Malay stall, Kayat, as they were preparing their cooking ingredients for the next day. This time, they even shared some fried potatoes with her as they were making begedil (deep fried potato patties). It seems that the stall operators are becoming more comfortable with our presence, especially Hasyimah. 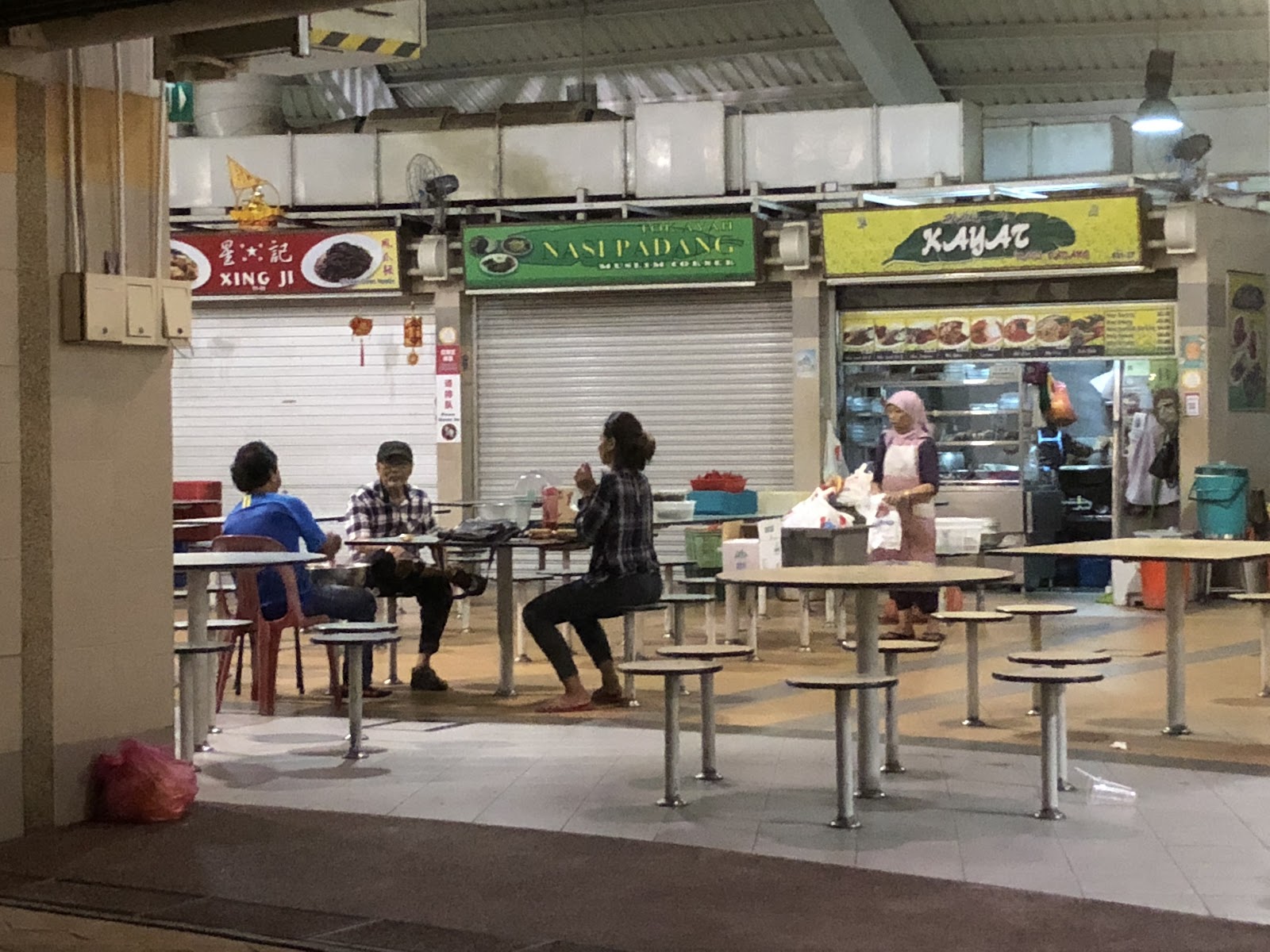 A connection 9 rehearsals in the making.

After they were done recalling the movements from the co-created phrase, Haizad wanted to try the last segment, this time with the trolleys and to add in some small details. He instructed two of them to simulate arranging all the trolleys in a line to signal the end of the segment. Everyone will then move towards the trolleys to take out their costumes, put them into the trolleys and disperse them all around the hawker center. 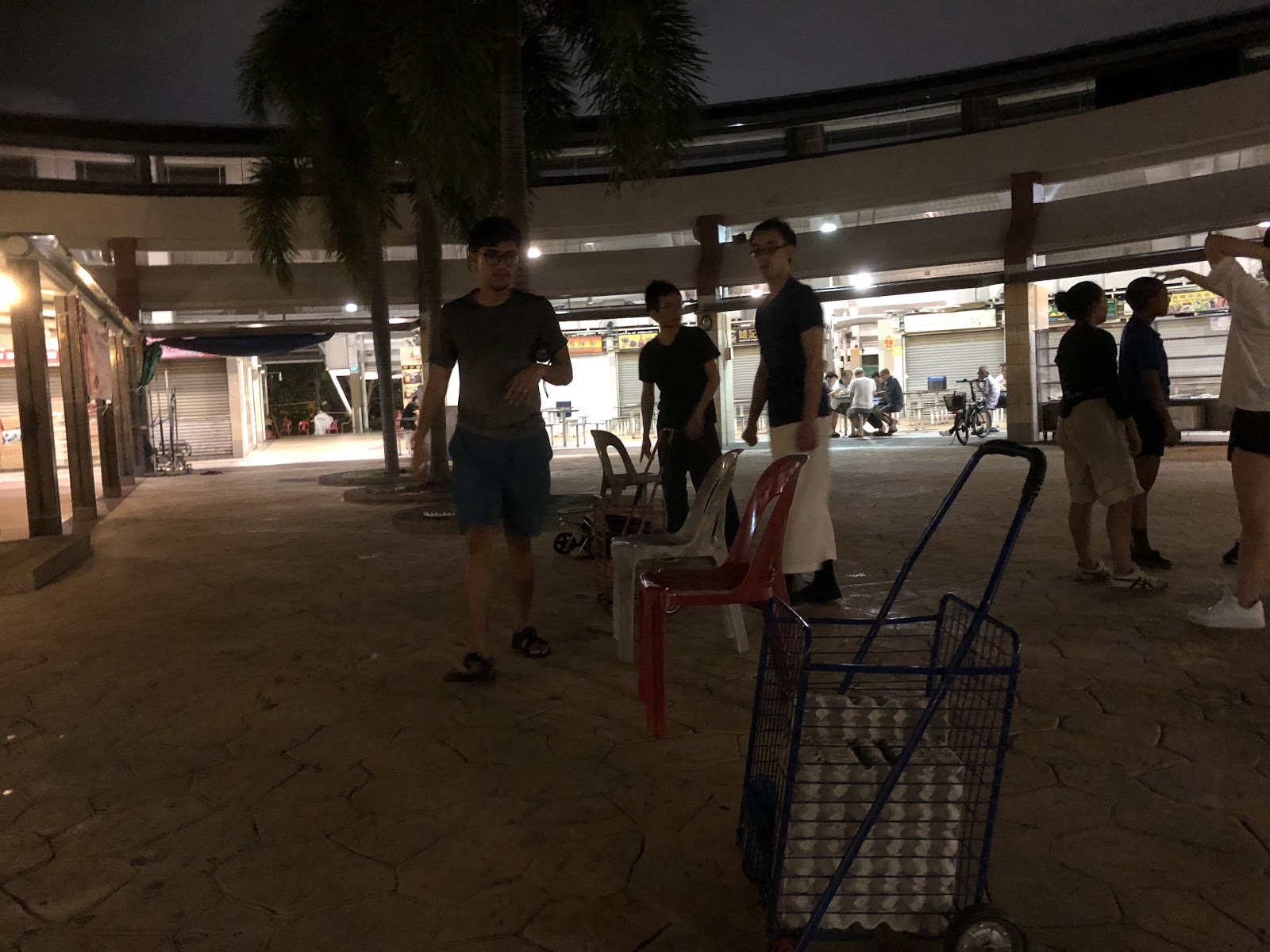 After this, Haizad wanted to try the segment again, this time having one of the dancers to start doing the phrase first, while the rest were still squatting. They would then join in at their own tempo and pace, and as they were executing the phrase, they were to interact with each other, even if they were not at the same part of the phrase. They could also break in and out of the phrase as long as the transitions were smooth and even share a trolley as they were interacting. This part of the segment will end when the trolleys are arranged in one line. 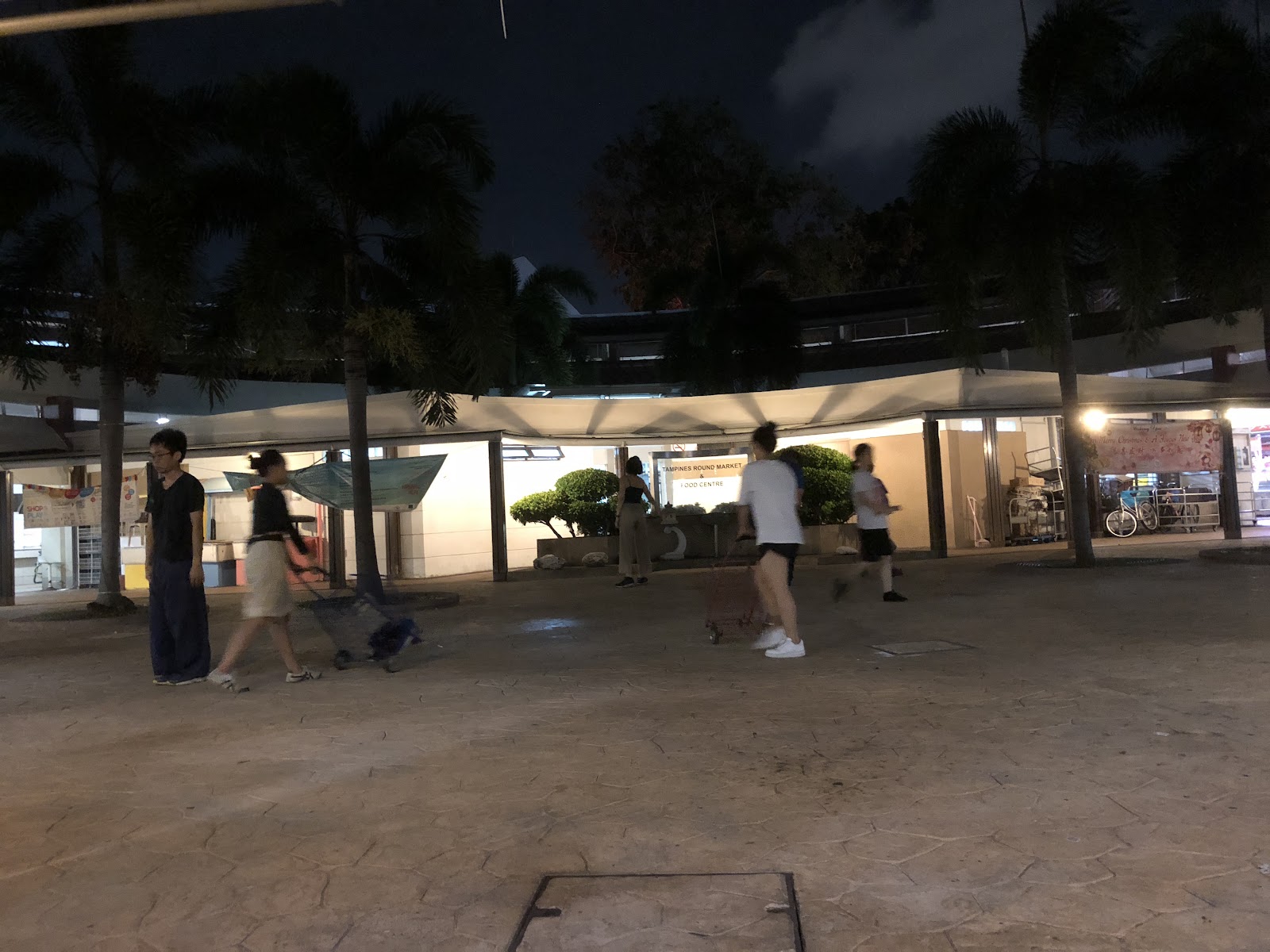 The trolleys added another texture to the sounds heard in TRMFC.

After this round, the dancers voiced out that they needed a visual cue to start coming together at the end, and Haizad decided the trolleys will be the visual cue. He also added he wanted to add in a snake in the middle of the segment, where one of them will signal the rest that the “snake will now begin” and everyone else will take a trolley and follow her wherever she goes, and disperse again at the end of the snake, indicated by another visual cue. The sudden insertion of the snake confused the dancers about the sequence of the performance, who will give the visual cue for which part, how do they know when each part starts and end etc.

After Haizad clarified the sequence with them, they carried it out with some guidance to get a clearer understanding. It was interesting to see that some of the dancers moved differently with the trolleys (mostly chairs that “stood in” as trolleys); some pushed, some pulled, some even carried. 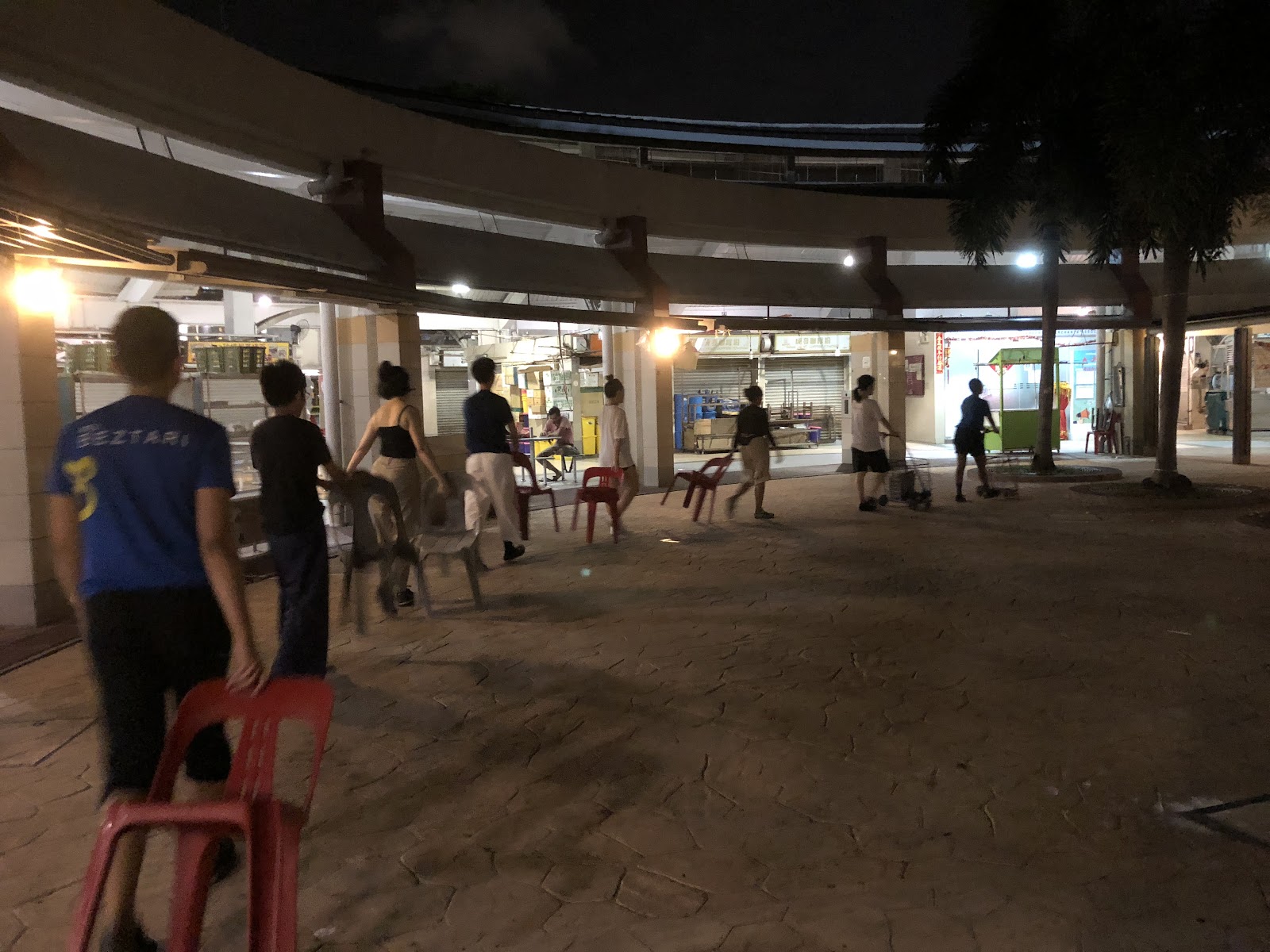 This time, he also guided them on the ending of the segment; after the trolleys are arranged into a line, the dancers will take off the costumes, put them inside the trolleys and switch on a bluetooth speaker to play the audio recordings (this was still tentative). They would then walk towards the seats and pat each other’s backs in a circle, before going to the trolleys one by one and dispersing. 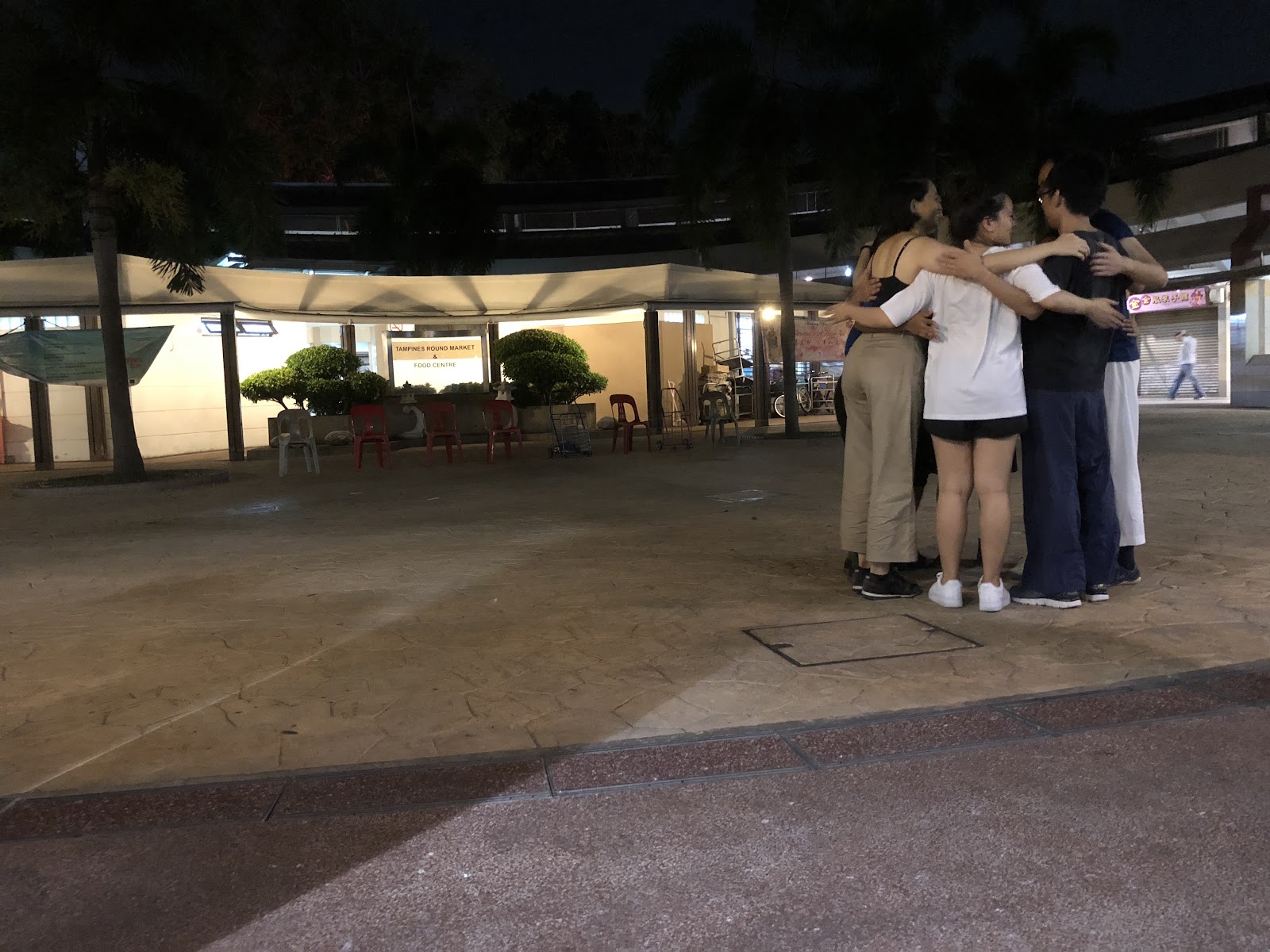 Patting in a circle.

At the end of the run, the dancers clarified some aspects of the last segment with Haizad. After which, he instructed everyone to break off into their 4 groups and show their choreography. He will then see and advise what can be added. 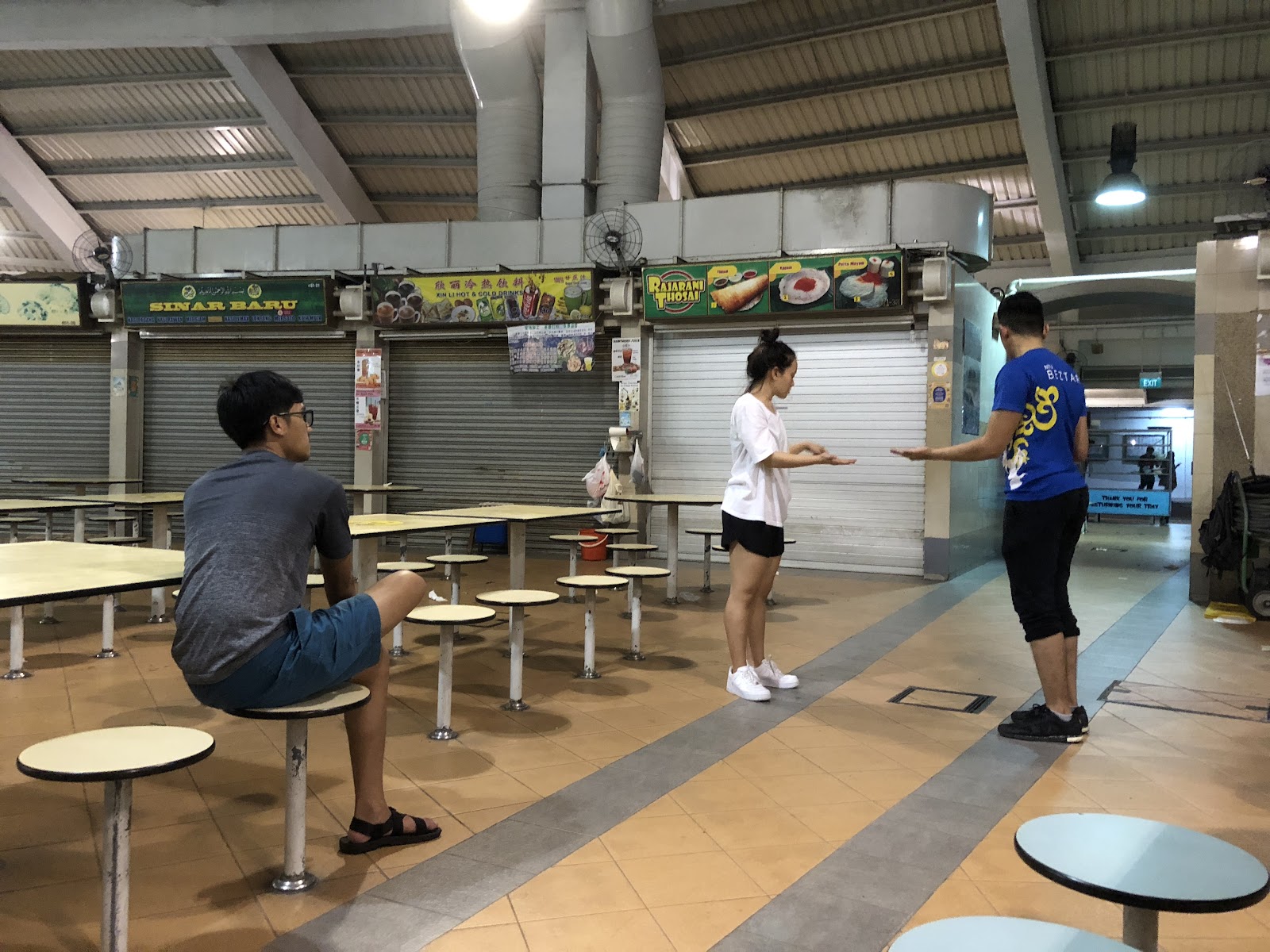 If possible he wanted the Makan group to interact with the audience more by sitting or standing nearer as they performed their piece. 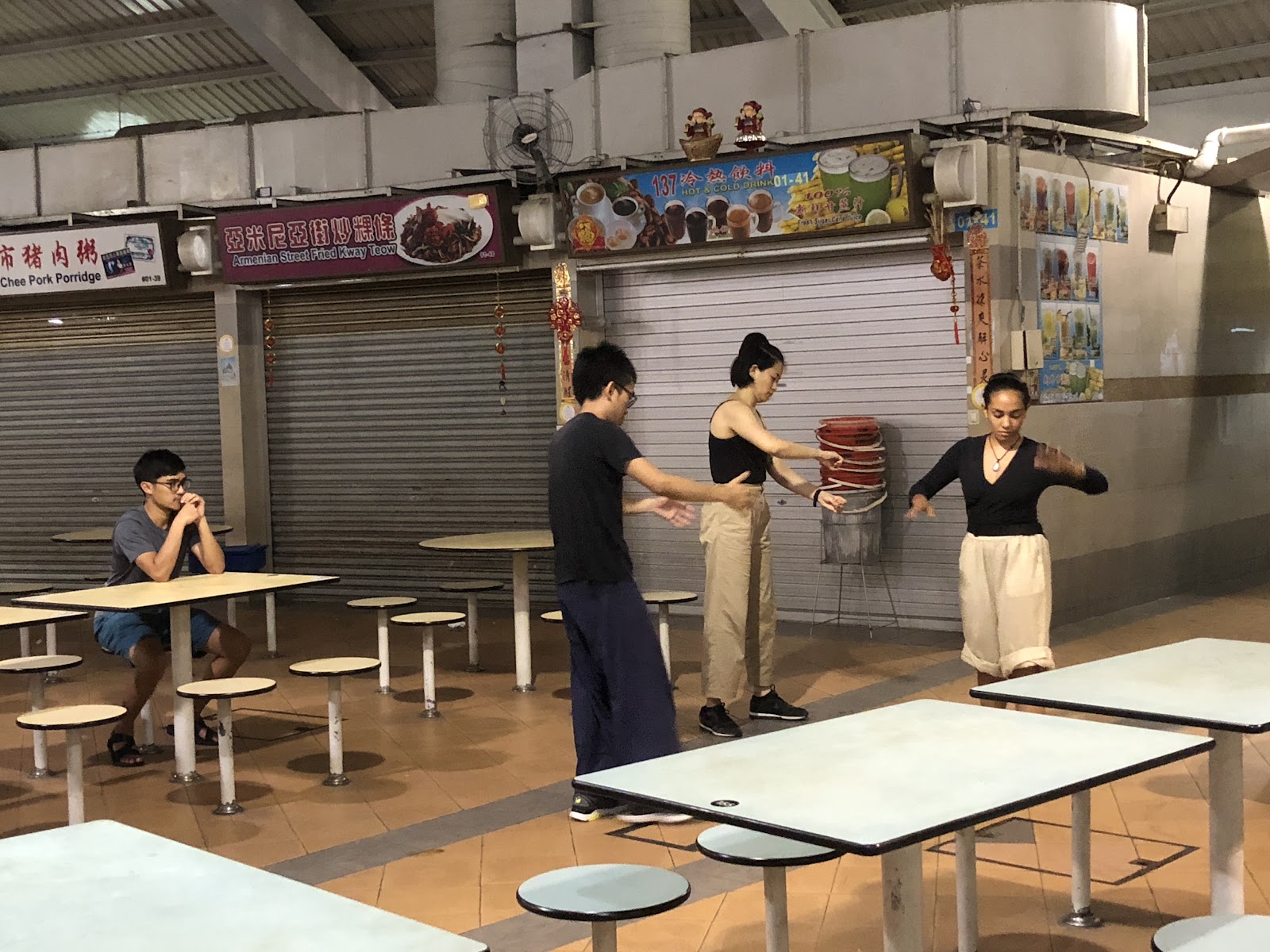 Every time they come together, the Labourers can put the cup onto a table where residents were sitting, in order to immerse them. 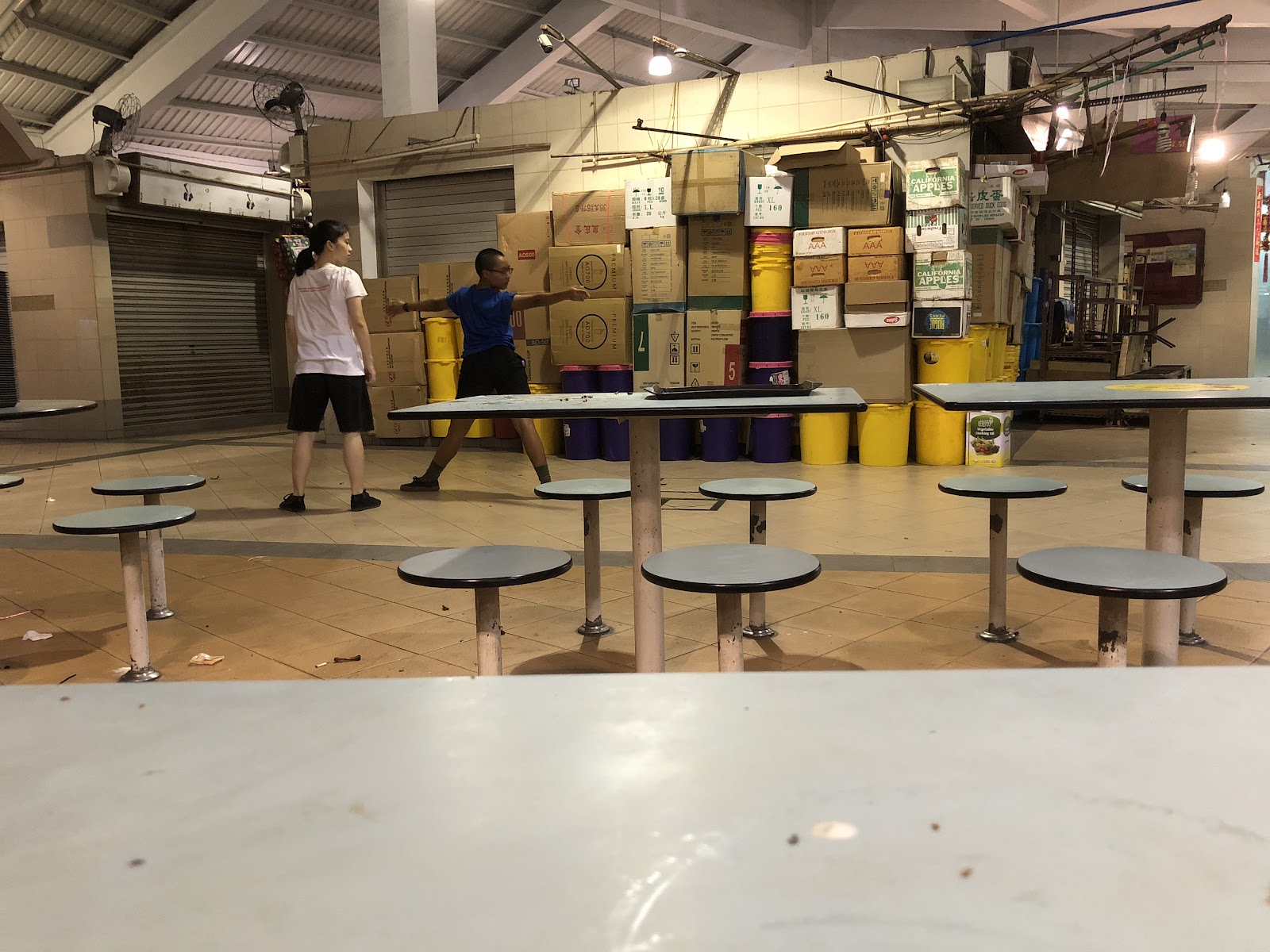 The Spaces group can attempt to weave through the audience, and possibly even in the space between the tables. 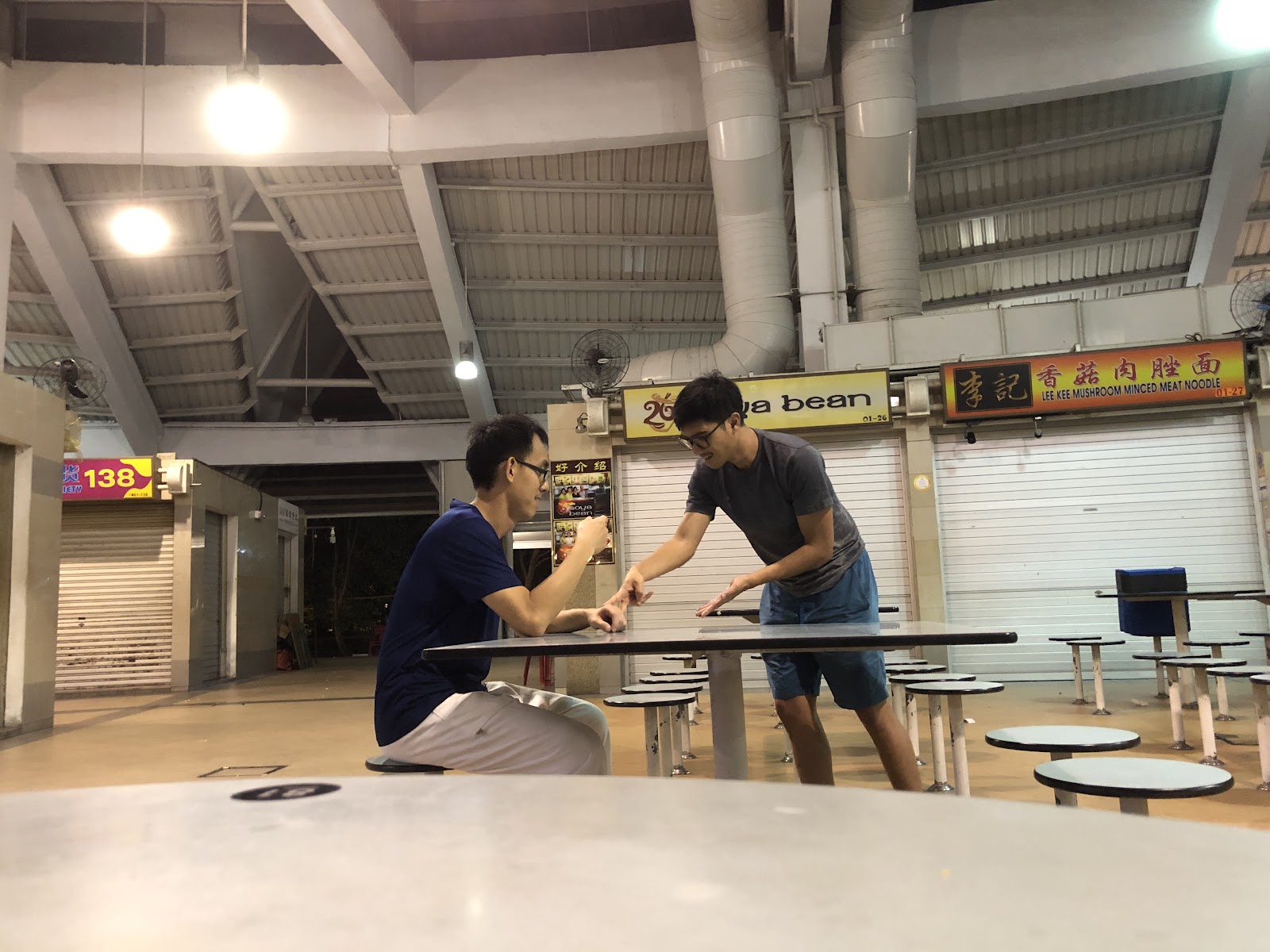 The Demographics should stay in the large corridor a bit more, and also interact with the audience by coming closer to them.

Towards the end of the rehearsal, Hasyimah updated the dancers about the costumes and the designs that were produced during the previous rehearsal. She added that everyone needs to figure and source out for more trolleys and bluetooth speakers. 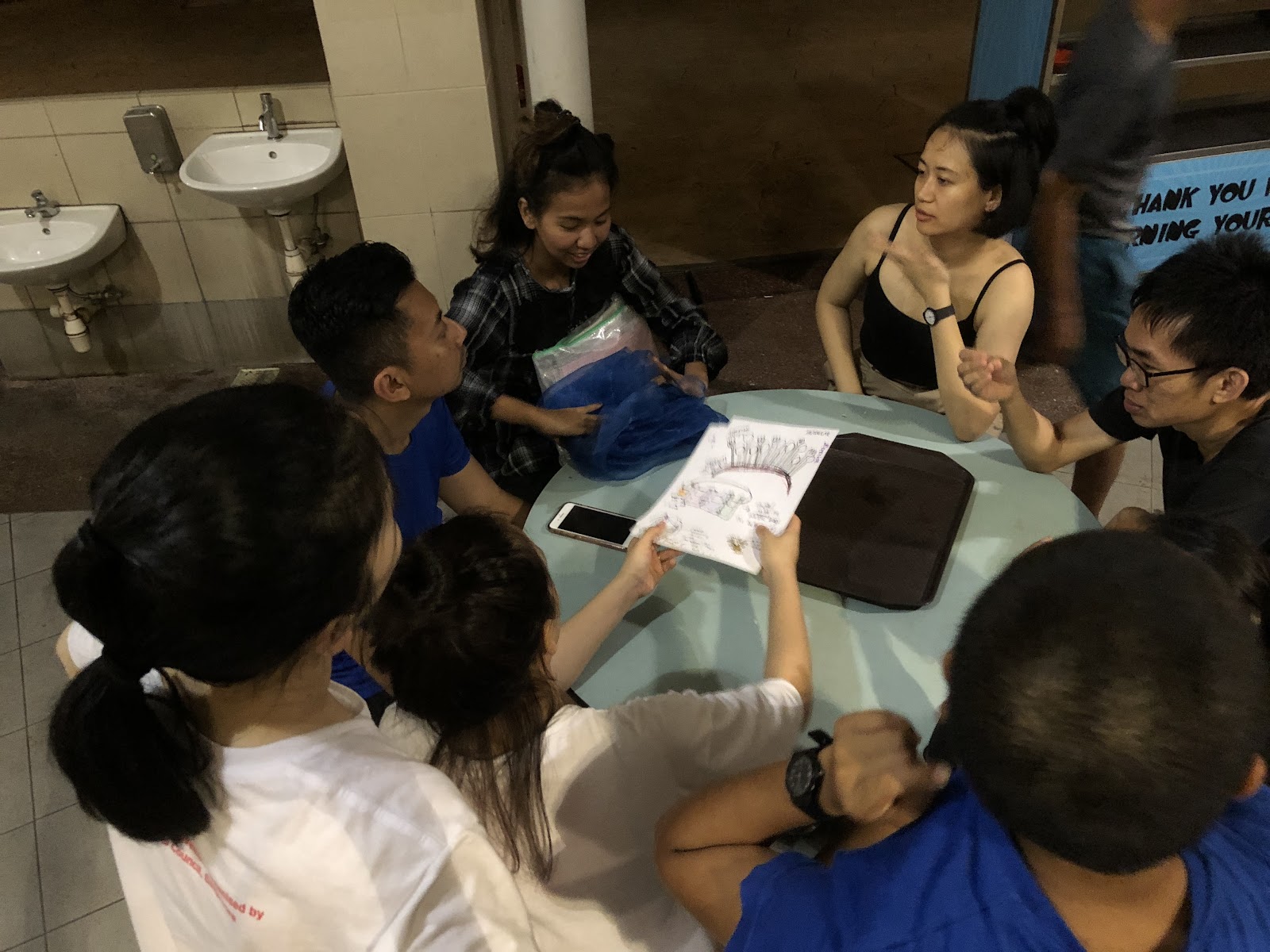 Updates on their costumes.

Haizad also updated about the developments that were discussed previously, especially the song in the second segment. Before the end of the rehearsal, he wanted to tie down when they would clap when the song is being played to engage the audience during the performance. It was refreshing to see them perform and stick to the rhythm of the music as compared to soundscapes. 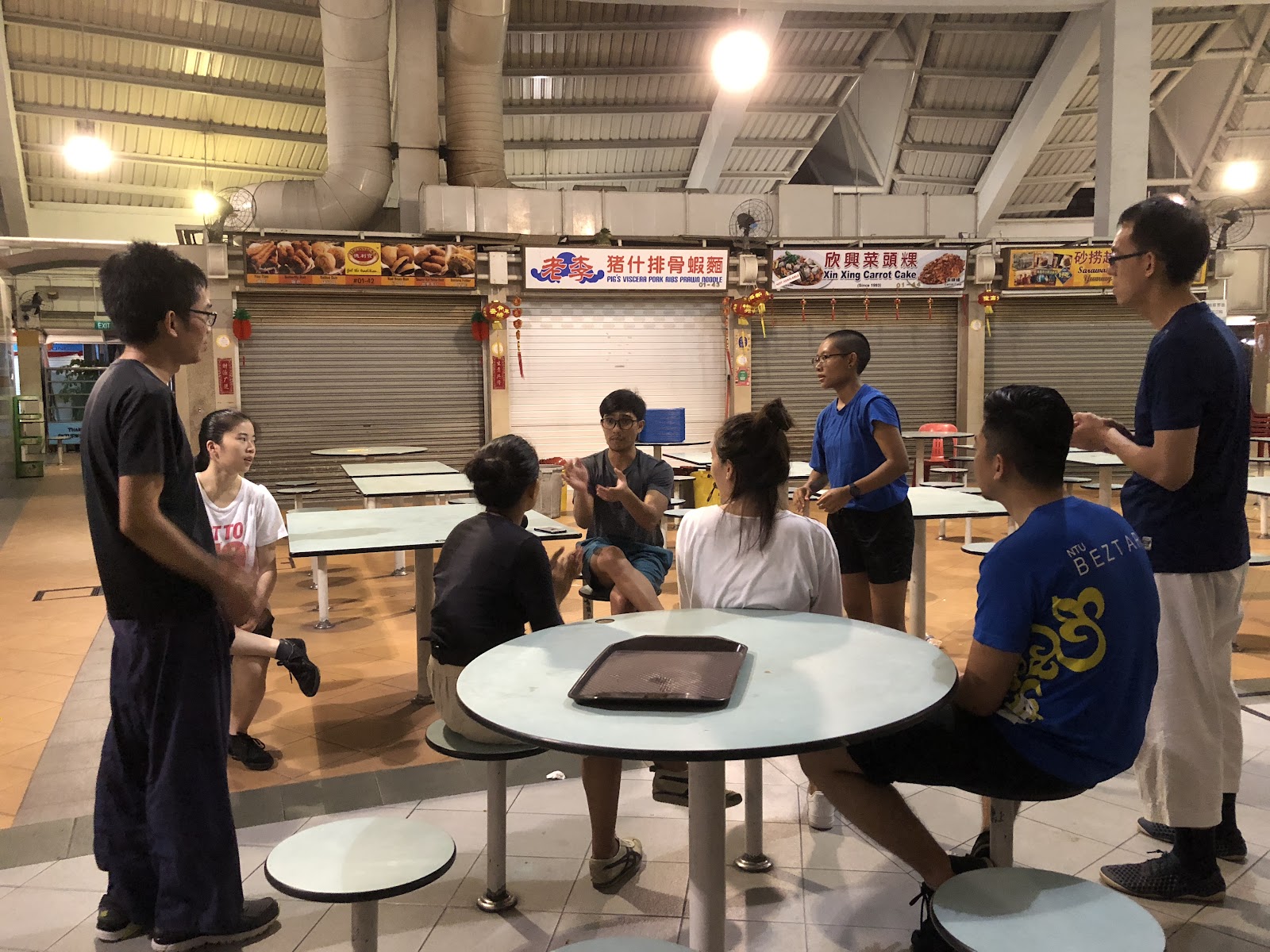 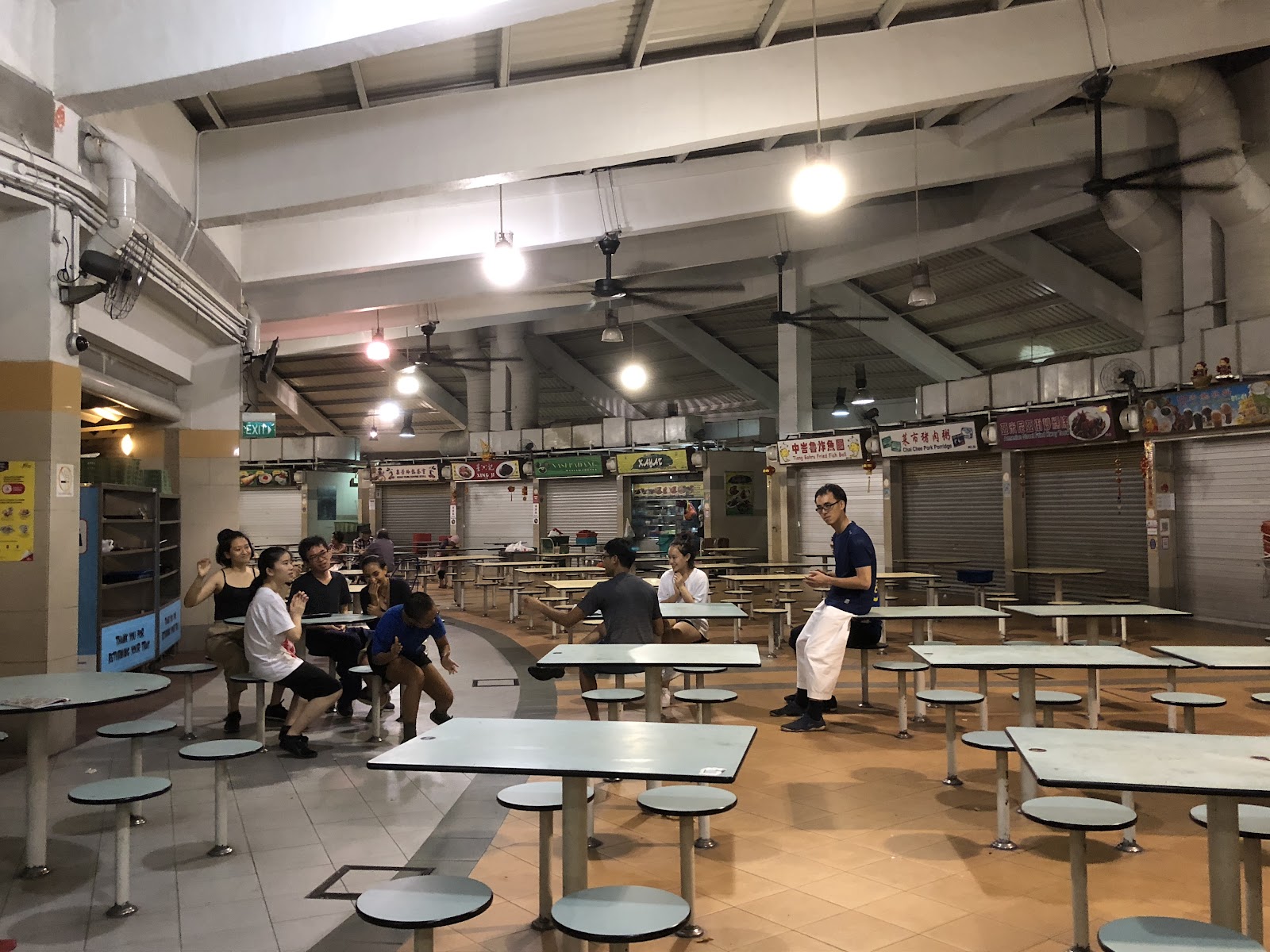 Learning to clap in a quiet hawker center. 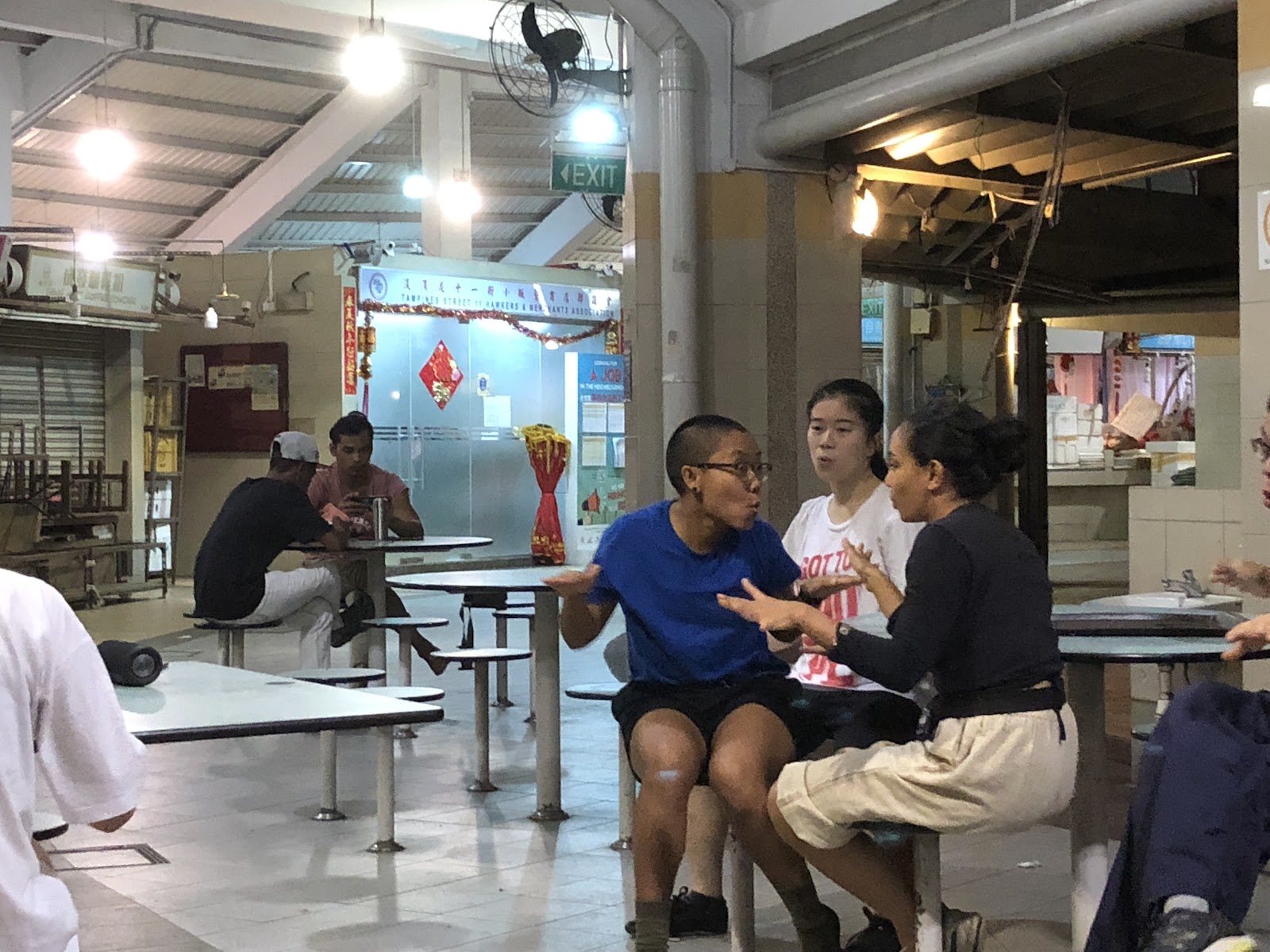 Haizad added that they should also be more enthusiastic and expressive like Syimah.