On-site at Tampines Round Market and Food Center (TRM&FC)

3 Words or phrases that lingers:

It was a cool, windy night, hardly any clouds were seen and the stars were peering through. The food center was almost empty except for a few groups sitting sparsely throughout the food center. Some stalls were still operating such as the steamboat stall, while others were either closed or preparing the ingredients for the next day like the Muslim stall, which gave rise to the smell of spices. There was a considerably huge lack of birds present as compared to during the day where Haizad, Hasyimah, Hariz and myself had the site recce.

Haizad first gathered everyone to introduce them to the round market & food center and to explain more about what they will be doing for District 18.

Haizad and the artists gathered somewhere in the almost deserted food center.

After the introduction, Haizad asked everyone to walk around the TRM&FC to orientate/familiarise as well as to observe and be present in the space at night. Most importantly, we were not allowed to speak and not to think in the shoes of artist trying to create a new work, but from a third-person view, watching what goes on. This reminded me of P7:1SMA’s philosophy of existing in the in-between, and as we walked along, it felt like we were a presence from another realm, with people looking at us curiously.

We walked around the food center in roughly 3 concentric circles; close to the perimeter/boundary of the food center, in the middle corridors and finally a bit closer to the center of the TRM&FC.

The first round had us walking almost outside the food center. Some of the artists even interacted or made contact with the stalls outside. There was also some incense being burnt along the edges and on some altars which I respectfully decided not to photograph. Decorations had been put up for Chinese New Year, basking some areas in red light. 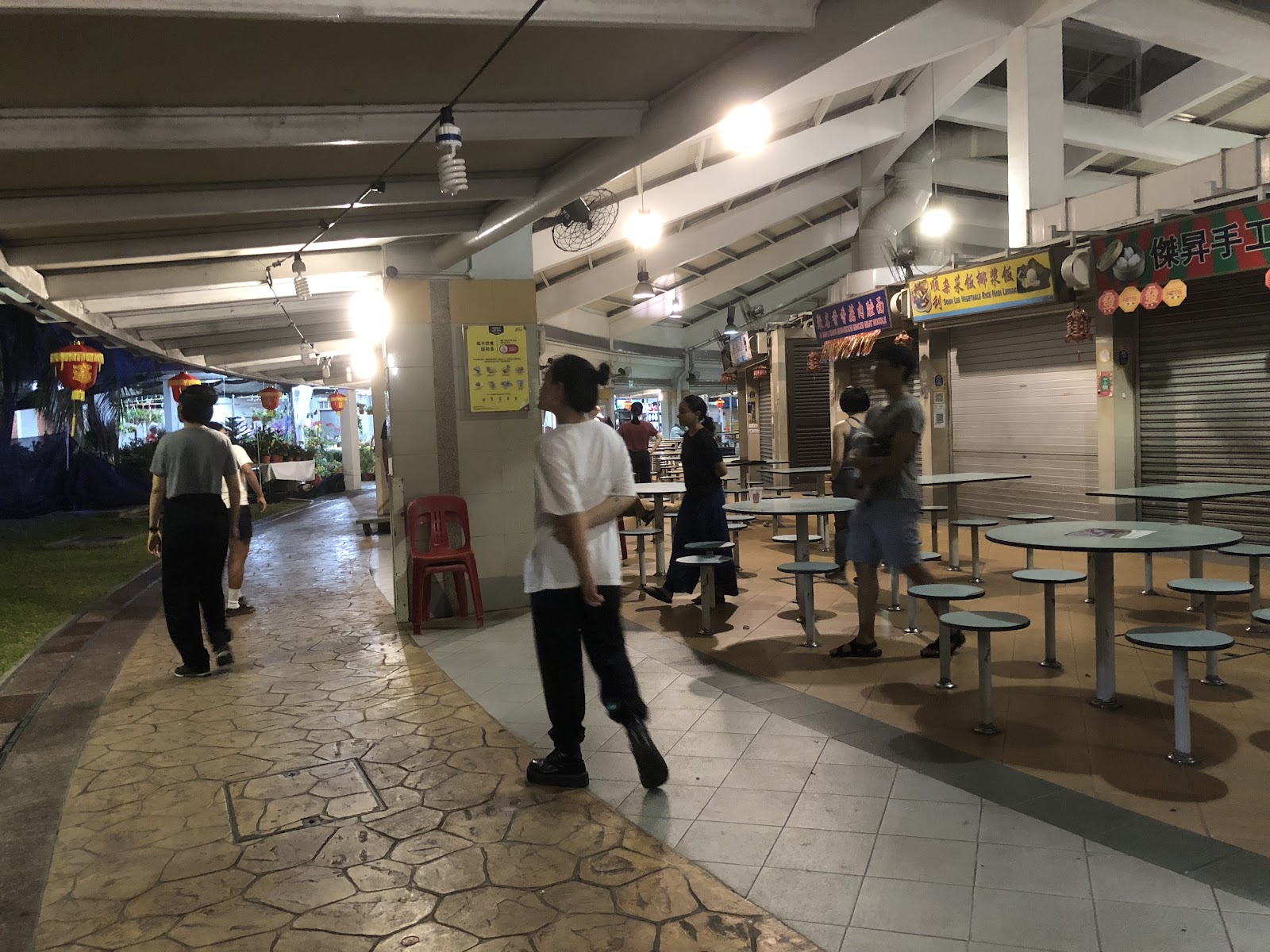 “Observers” walking along the outskirts, observing the shops within and just outside the food center’s boundary.

As previously mentioned, most of the people that were still there were customers of the steamboat stall. There were big groups, presumably families and friends, eating together and the indistinct chatter/noise was the loudest here. There was also a drink stall open, and one of the dancers commented that these two stalls could have “pakat” to benefit from each others’ business.

Curiously drawn towards the only operating stalls at that time, with many customers still eating.
Inevitably, some of them paused to look back at the observers, conscious that they were being watched. It felt to me like we were invading their space.

After finishing the first round, we moved in to the corridors of the market. The familiar yet unpleasant smell of fish and meat lingered throughout most of the market, while some areas had the fragrant smell of flowers. There was an area that looked like a morgue, with huge metal doors at about 2 meters in height, presumably a large storage facility for meat and fish.

The absence of noise and people in a usually rowdy market was rather unsettling to me.

As the TRM&FC was divided into 2 halves; one half being the market and the other being the food center, we passed by the mostly empty tables. At this point, the air was almost still and as we continued to move along, we walked past a table of 4 elderly Chinese men. One of them asked Shaw En what we were doing in Chinese, to which she responded we were doing a project.

Observers? Wanderers? Observing wanderers that were invading?
“(In Chinese) Ah girl ah, doing project ah?” We were pulled out from our “realm” and brought into their world when they asked what we were doing. 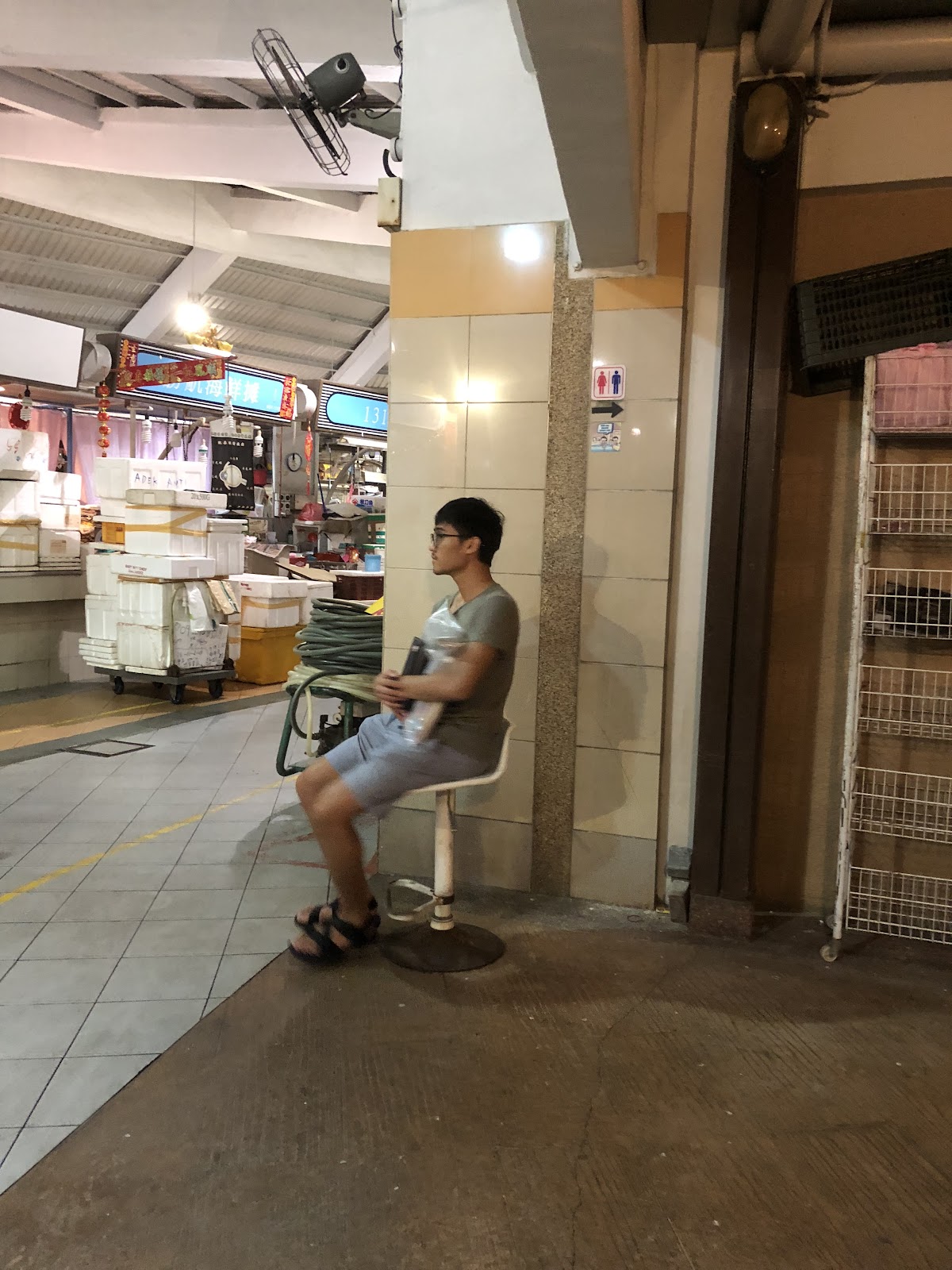 Haizad found, sat and twirled around on a lone spinning chair.

The seemingly misplaced Merchant’s Association aroused the curiousity of the artists.

We finally ended up exploring the central area of the TRM&FC. There was not much to see besides the toilet and the sinks. The sky was very clear and there was a continuous cool breeze. 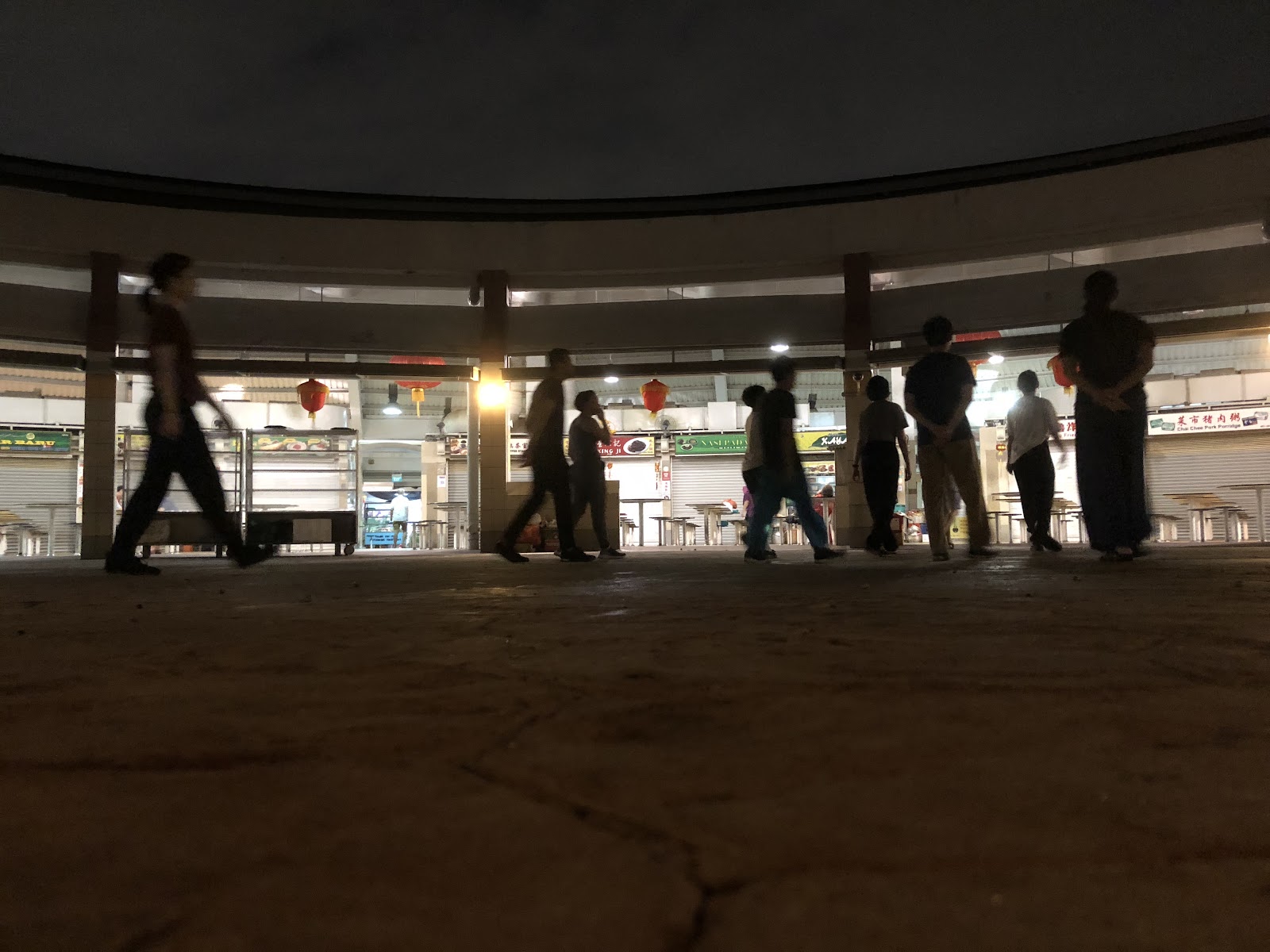 Observing within and from the shadows.

After we have completed the three rounds in the TRM&FC, Haizad gathered everyone to one of the tables and asked them to jot down what they observed through their eyes (See), nose (Smell) and ears (Hear) onto purple A4-sized papers. They were of course free to jot down however they wanted, either by images/drawings or descriptions. They then had to share and exchange their observations with everyone else. (Timelapse was taken during this process)

This activity was similar to teachers bringing their classes on an excursion to the museum or zoo and asking them to draw or describe what they saw, and to also use their 5 senses as a guide. I guess it is safe to say that what we went through as children are not completely irrelevant when we are older and that we sometimes forget to make use of our basics to observing and understanding life. 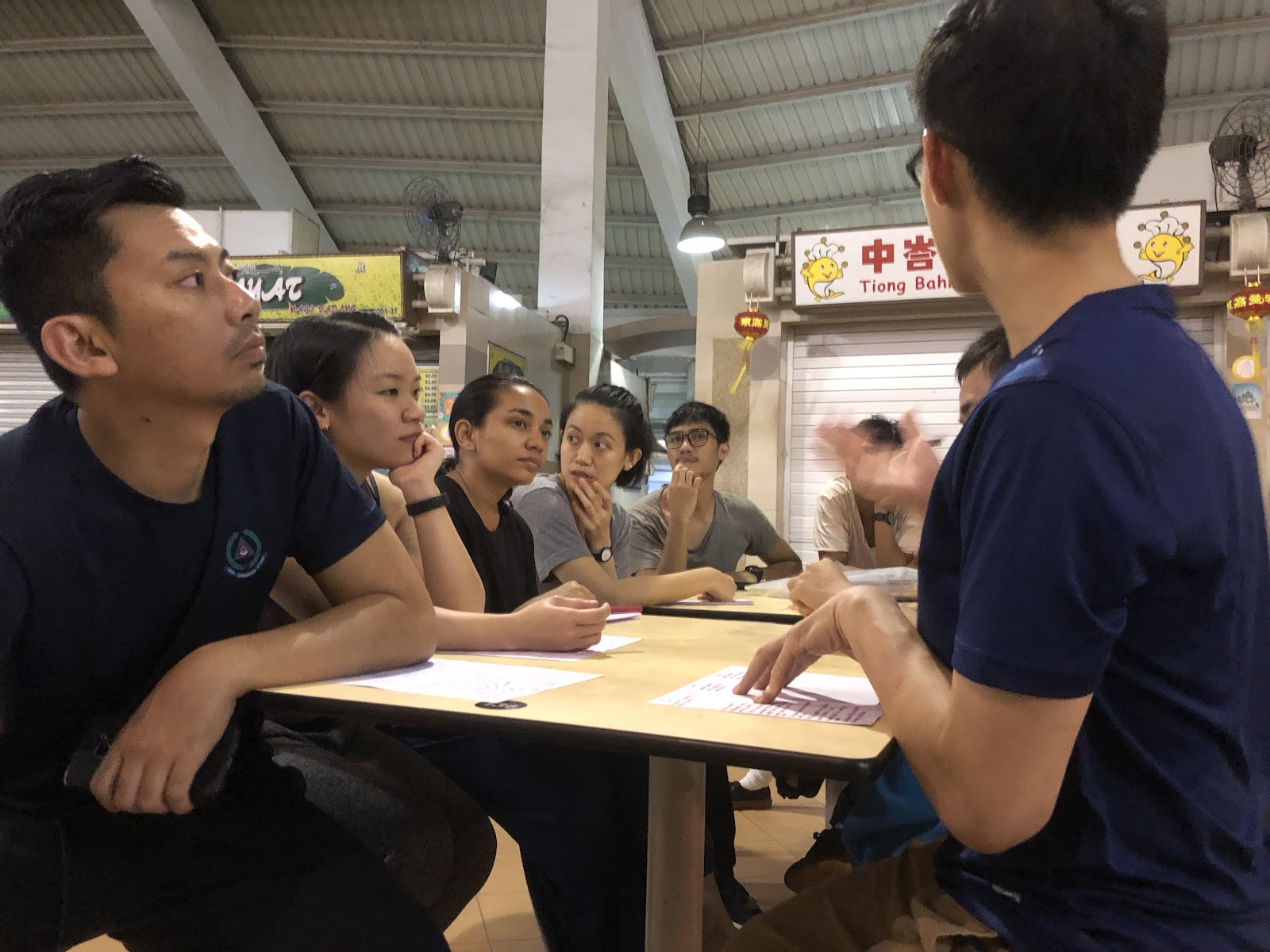 Shangbin during his turn to share. Interestingly, everyone has the same 5 senses and were brought into the same space, yet each person picked up particularly different things in the space. I believe this is due to their own personal character, background and preferences.

After everyone had taken their turn to share their observations, everyone then had to circle one observation for each sense (1 for sight, 1 for smell, 1 for hear), the one that relates the closest to them or best describes them as a person. Some were surprised and had difficulty doing so because they either had too little to choose from (choosing the “lesser of two evils”) or had too many to choose from that they did not know which to choose or describes them better. Haizad them helped them make a decision, like a teacher guiding their student. The scanned images of the papers are located in a separate folder. 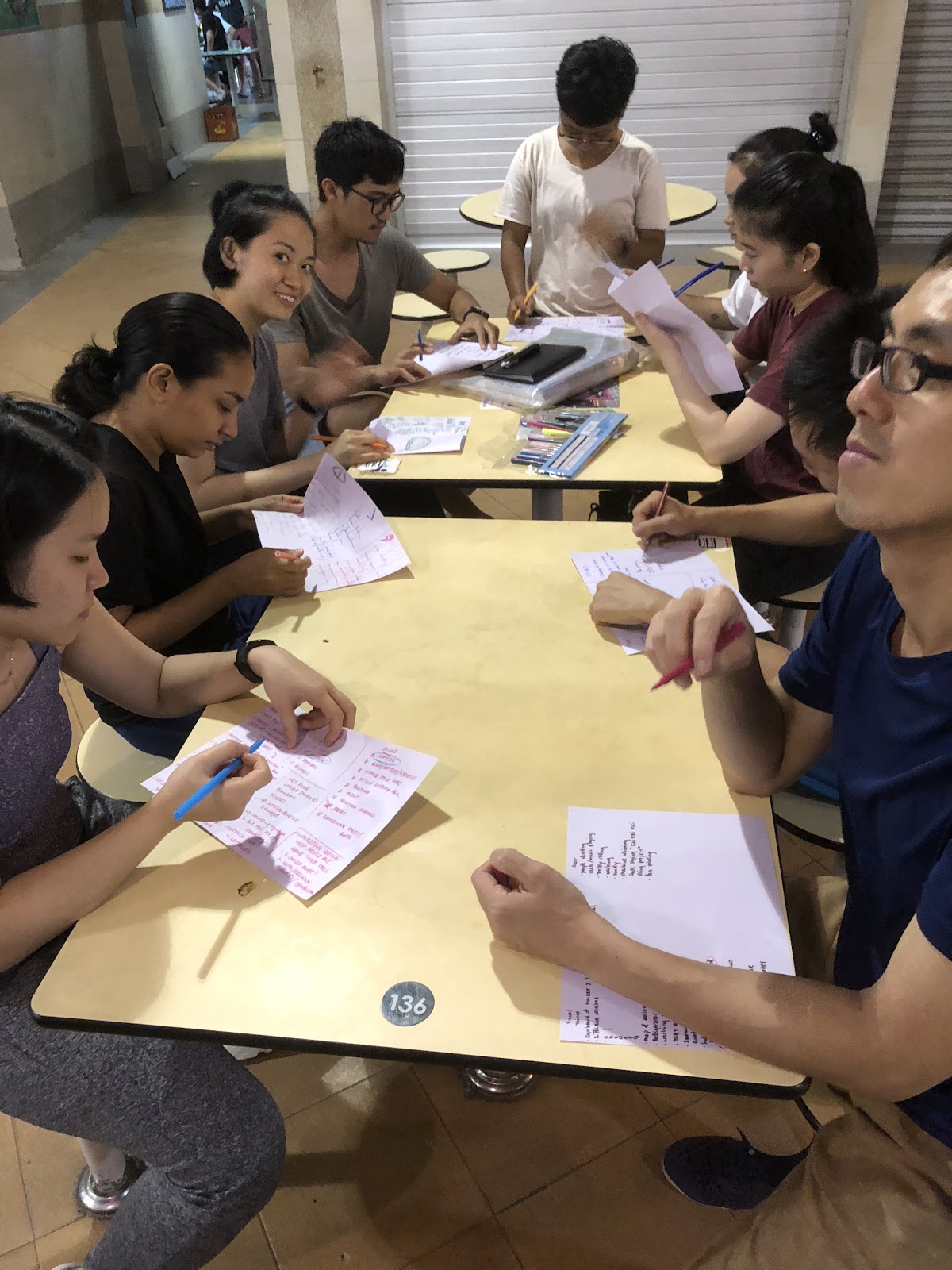 Deciding what to circle was harder than expected. Do we know who we really are?

Haizad then mentioned that there was high possibility of the dancers using props as part of their piece, and those props will have a close relation to what they circled on their papers. If possible, he would want them to acquire those props from the stalls in the market itself, in a way to give back to the market before its scheduled renovation in April.

Lastly, Haizad asked the dancers to stand in between the pillars to try out the space, and then asked them to walk to the stalls. This was the last task before we were dismissed from the rehearsal.

Their silhouettes looked like Iron Man suits as they stood there waiting to be called upon.